West Side Story Is a Beauty

Steven Spielberg does the show right. 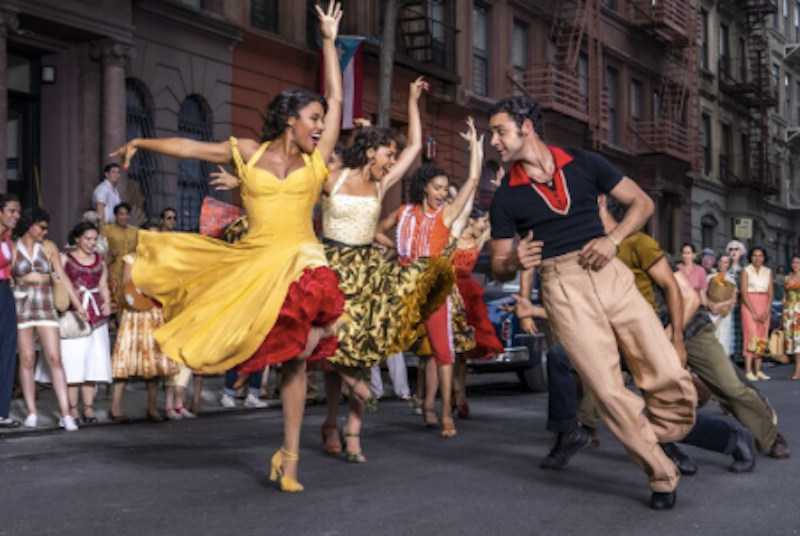 The Spielberg West Side Story is to the original what Jurassic Park is to the works of Ray Harryhausen. Everything is done better, and boy, do you feel it. West Side Story has always been overwhelming. Souped-up, it can level blocks. The spectacle and emotion clamp your eyes open and palpate the heart, and at the end you stagger out and everything looks so tiny. A swell evening, but only if you’re built for it and ready to commit. For one thing, West Side Story is always 20 minutes too long and it stays that way here. America’s favorite musical is a vast enterprise regrettable for its weight but treasured for its peaks, which are numerous and reach very high. “Tonight” is the great aria of American musical theater, and “Somewhere” comes close. “Jet Song” is one of the great opening numbers, and “America” and “Gee, Officer Krupke” tie as comedy songs. Looming above them all is “Maria,” so well known that its life as a song seems secondary. For my generation, at least, “Maria” was a fact that the world came equipped with, like Coca-Cola or sidewalks.

So powerful are the show’s songs (Leonard Bernstein and Stepehen Sondheim), story (Romeo and Juliet), and premise (immortal tragedy, now in slum New York) that they’ve overcome such handicaps as George Chakiris and the visual flair of Robert Wise. Now they face no handicaps. This may be the perfect game of West Side Story making. From the choice of leading lady to the magazine photos taped nearby Tony’s cot, Steven Spielberg has done fine. The blouses for Anita’s friends in the “America” sequence are right on; the same for the acting and staging of a crime-action scene at a bar. The original movie’s use of color has been topped by cinematographer Janusz Kaminski, who expands on the old effects and adds compositions that are more complex but work dramatically. Tony Kushner’s screenplay straightens out events so that “Cool,” an oddball in the show’s old dramatic line-up, becomes a lynchpin to the story. Justin Peck’s choreography is beyond my competence to appraise; it looks better suited to the screen than Jerome Robbins’ did, and in general the movie brings to song and dance the same intermediate plausibility that superhero movies have managed for their particular brand of physically and socially impossible behavior. The cast helps. Mike Faist, as Riff, caps his performance with a stand-in-place writhe and twist captured in medium shot.

Riff should be a breakout role; so should Bernardo and Anita. Last time only Anita managed it, because Rita Moreno was the one talent in a crew of stiffs. Now there’s Ariana DeBose and Faist and David Alvarez (Bernardo), all of them looking like stars. Everyone in the cast comes through, from Krupke (Brian d’Arcy James) and A-Rab (Jess LeProtto) on up. Moreno plays Valentina, successor to Doc, and does beautifully by a climactic speech and “Somewhere.” The part of Anybodys is played for drama now, with the performer (Iris Menas) connecting. Josh Andrés Rivera’s Chino brings home how, for those of a certain temperament, the story must be understood as Chino’s tragedy—that poor bastard.

Ansel Elgort plays Tony along similar lines. Unlike Chino he’s a fighter, but he’s still out of his depth. He just wants things to turn out well. He wants life to be good instead of bad, and nothing comes out right. Falling in love the way he does, he’s getting chumped by fate’s frying pan in the face, since look how things turn out. In “Cool” Elgort’s able to change gears and act dangerous. The rest of the time he gives us Tony the man wrongfooted by events, but in the best form this person could take: as a guy who really isn’t the smartest but who still has his eye on what counts, on the things that are best about being alive. You’re sorry to see what happens to him.

Rachel Zegler looks like a Hirschfeld cartoon—dot eyes, shrimp shoulders, black hair down in a waterfall—and she sings with a pure voice that goes a little high while doing justice to the songs. But mainly she makes the story work. She’s new but she falls into drama like a natural, and she plays Maria, the girl who plunges ahead. She plunges her mouth toward Tony and they have their first kiss. When Anita and Maria are reconciled, Zegler has Maria plunge her cheek against Anita’s shoulder; Anita, sinking back into her grief, is taken by surprise and has to adjust. It’s a lived moment, something the old movie didn’t have in great supply.

Zegler and the film almost resolve a qualm that dogged the original show’s lyricist, the notoriously self-demanding Stephen Sondheim. All his life he was ashamed of “I Feel Pretty” because he’d stuck in a clever line: “It’s alarming how charming I feel.” A girl like Maria wouldn’t say that, he felt. He meant specifically that a Puerto Rican girl wouldn’t sound like Noel Coward. But Sondheim, by his own account, didn’t know any Puerto Ricans. To anyone else, it seems plausible enough that a kid might hear some dialogue on TV or at the movies and then use it to make fun, which is what Zegler’s Maria is doing. The one catch is that this Maria’s new to the country, with her need for practice being the movie’s reason that a Spanish-speaking family is speaking English at home. Maria might soon pick up on alarming and charming, but she wouldn’t yet. Otherwise, we see the line’s sense. Along with the imaginary committee to honor her, along with the imaginary key and becoming Miss America, she’ll also help herself to some grand manners and joke about them because why not, she’s really happy and it feels good to take society’s high-and-mighty things (white America things, one might say) and treat them as no better than you are. Any beautiful heart is equal and deserves the same, society be damned. That would be the operating premise of this girl, and no wonder Tony’s in love.