Give Spidey a Break

Spider-Man: No Way Home is fine, but Spider-Man movies were better when they were simpler and less clogged with "multiverse" junk. B- 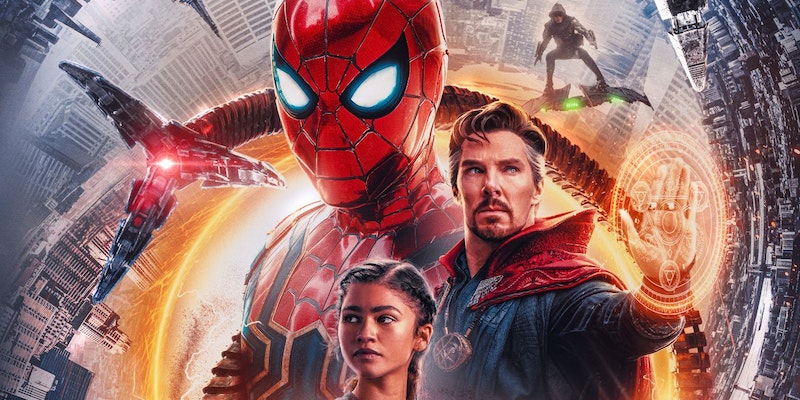 The involvement of Spider-Man in the Marvel Cinematic Universe, made possible by a special arrangement a few years ago between Sony and Disney, is a mixed bag. On the one hand, they found a fantastic Spider-Man/Peter Parker, Tom Holland, who has the right look and youthful charisma for the role. The films are also quick to remind us that Peter Parker is a teenager, with typical teenage problems, like college applications and worrying about whether the girl he likes (Zendaya's M.J.) likes him back. On the other, the MCU movies have often treated him more as a sidekick and protege of Tony Stark's Iron Man than as his own hero.

The first film in the series, 2017's Spider-Man: Homecoming, was mostly enjoyable, featuring a decent villain turn from Michael Keaton, but the sequel, 2019's Spider-Man: Far From Home, was less successful because it took Spider-Man out of New York and put him on a school trip to Europe. That film mixed in some mumbo-jumbo about multiverses, before establishing that it was a fake-out.

The new film goes back to that idea. Once again, there are mixed results, with some fascinating ideas mixed in with fan service up the wazoo, and other choices that don't work at all. The last film ended with villain Mysterio (Jake Gyllenhaal) announcing on a worldwide broadcast that Spider-man was Peter Parker. The new movie, directed again by Jon Watts, picks up immediately afterwards, with Peter being swarmed by reporters and fans everywhere he goes.

Eager to stop the harassment of himself and his loved ones, Peter goes to fellow Avenger Doctor Strange, and asks him to place a spell that will allow humanity to forget that Peter is Spider-man. But things go awry, and it causes villain characters from previous, pre-MCU incarnations of the Spider-Man franchise to appear in our universe. It's the bad guys from all of three Tobey Maguire movies (Willem Dafoe's Green Goblin, Alfred Molina's Dr. Octopus, and Thomas Haden Church's Sandman), and both from the Andrew Garfield "Amazing Spider-man" era (Rhys Ifans' Lizard and Jamie Foxx's Electro.)

Both ex-Spider-Men, Maguire and Garfield, appear as well, giving viewers action sequences with three Spider-Men, as well as other scenes where they compare notes. Everything involving the trio of Spider-Men together is gold. It's not only played for comedy, but also works as storytelling.

As for the bad guys, the film realizes that nearly all of the villains in this franchise got the way they are due to science gone awry and/or lab accidents, and for that reason, there's an attempt to give them redemption arcs. This works especially with the villains played by great actors like Dafoe and Molina.

It raises some strange questions about subtle differences between the different universes, including changes in costume, powers, and the presence or absence of certain characters. This is the sort of minutiae that fanboys obsess over every time a trailer or set photo is released, so doing it this way was kind of an ingenious idea. However, while it's tempting to do some dorm-room philosophizing about the nature of the universe, the real reason for these differences in universe is merely choices made over the years, for whatever reason, by writers, directors and studio executives.

Another holdover, whose return didn't require any multiverse shenanigans, was J.K. Simmons' J. Jonah Jameson, Parker's newspaper boss in the Raimi movies. Cleverly, he’s reinvented as Alex Jones, only if Jones, instead of being banned from all major tech platforms, was instead broadcast on giant screens in Times Square.

The best action scene in the movie is Doctor Strange and Spider-Man fighting over one of Marvel's patented big square MacGuffins, as Strange alters the makeup of a city a la Inception. It includes a non-existent elevated subway line in the middle of Manhattan, like the one featured in the best movie of the franchise, Sam Raimi's 2004 Spider-Man 2.

The third act battle scene, set in the Statue of Liberty, looks similar to every other MCU movie ending, including explosions in the sky and less-than-perfect spatial consistency. The film gets off to a slow start, and some time passes before the plot gets going. Zendaya's M.J. isn't given much to do, and is capable of much more. The plotting, perhaps necessarily, is very convoluted.

Also, the idea of multiple Spider-Mans was already explored in Spider-Man: Into the Spider-Verse, the animated Sony Spider-Man film from 2018 that had nothing to do with the MCU. That universe doesn't come up here, but there’s one reference by Foxx's character to a "black Spider-man," and the reason we don't get Holland, Maguire and Garfield to re-enact that "pointing Spider-man" gif is because Spider-verse got their first. Spider-Man: No Way Home contains more good than bad, but I miss a simpler kind of Spider-Man movie.