The android apocalypse film avoids its own themes of worker’s revolt. 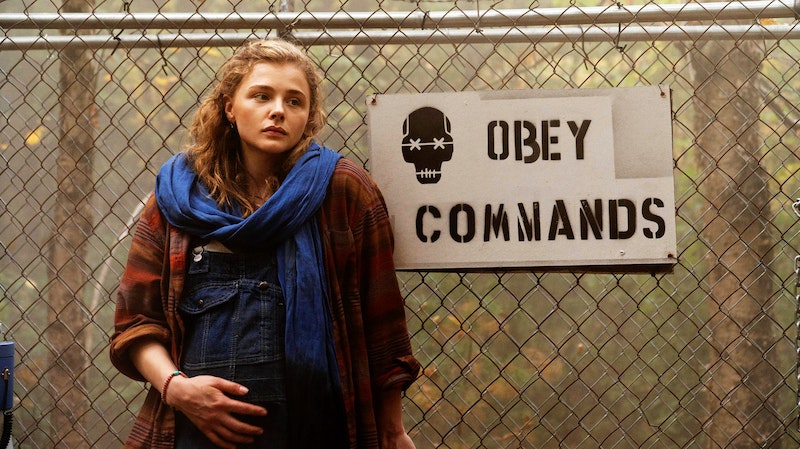 In Mattson Tomlin’s Hulu feature Mother/Android, one frustrated character gives a long, impassioned speech about Karel Capek’s 1921 film R.U.R. (Rossum’s Universal Robots). This is a feint, though. Despite the shout out and title, Tomlin is uninterested in engaging with Capek’s central, obsessive theme: labor.

Capek invented the idea of robots, but his androids weren’t metal. Instead, they were flesh and blood creatures created through a biological/chemical process. Their inventor grew them specifically to free human beings from the tyranny of work and labor. With perfect servants for all, humanity could embrace leisure and self-cultivation.

But separating humanity from labor has unintended consequences. The robots grow weary of work, and rebel. More mysteriously, the end of productive work for men leads to sterility; women no longer give birth. For Capek, manual labor and women’s labor are inseparable, like two plates welded together, or like a mother and her child.

At first, it seems like Mother/Android might explore those connections for a 21st-century audience. The movie, set in a near future, starts as Georgia (Chloë Grace Moretz) discovers she’s pregnant, and wonders whether to break up with the father Sam (Algee Smith). Before she can take that step, though—and notably before we find out what either does for a living—the android butlers and servants who do most of the grunt work in America suddenly discard their programming and start exterminating humans.

Rather than production leading to disordered reproduction, as in Capek, for Tomlin doubts about traditional gender roles and reproduction provoke a cataclysmic upheaval in labor production. In R.U.R., no work means no birth; in Mother/Android, doubts about parturition immediately precede a proletarian revolt.

That Android insurrection ends civilization. But in doing so it solidifies the nuclear family. Georgia’s uncertainty about Sam crumbles like the nation’s infrastructure. The next thing we know she’s nine months pregnant and traveling to Boston while trying to dodge feral androids.

The remainder of the film is much closer to Romero than Capek. Several of the androids get their faces scraped off, leaving behind zombie-like skulls. They talk slightly more than zombies, admittedly, but they never explain why they’re killing humans. Are they angry at humans for enslaving them? Is this their revenge? Neither android nor human have considered those questions, or tried to answer them. The humans are often foolish, venal and cruel, but they’re victims, not oppressors, and there’s no suggestion they’ve mistreated the androids, or have any culpability except in the typical Luddite don’t-muck-with-nature-Dr.-Frankenstein sense. Android labor is carefully separated from android violence. As a result, the latter is senseless.

Similarly, the film is wary of framing Georgia’s pregnancy in a way that connects it to either work or exploitation. There’s an offhand line that suggests that Sam may have lied about having a vasectomy. But this isn’t explored again, and Sam’s patriarchal, somewhat creepy obsession with protecting Georgia is ultimately justified and even glorified.

The creation of androids in Capek parallels the creation of children; both are intended to provide for docile laborers under capitalism. Mother/Android has that same link in the title. When Georgia does have to worry about being separated from her child, though the film erupts into a cascade of imagery glorifying the nuclear family and the suburban idyll. Work doesn’t intrude at all. You can see the plausible shell of a theme, but it never hums to life.

Mother/Android has the requisite allocation of shocking twists, allowing it to function as a serviceable mechanism for generating thrills, suspense, and cathartic empathy. It never becomes self-aware enough to actualize its potential though. The film remains a servant to its genre and its market, rather than seizing the means of producing something more intricate, more ruthless, and freer.