The Docks of New York (1928) and Josef von Sternberg's ineffable abilities with atmosphere. 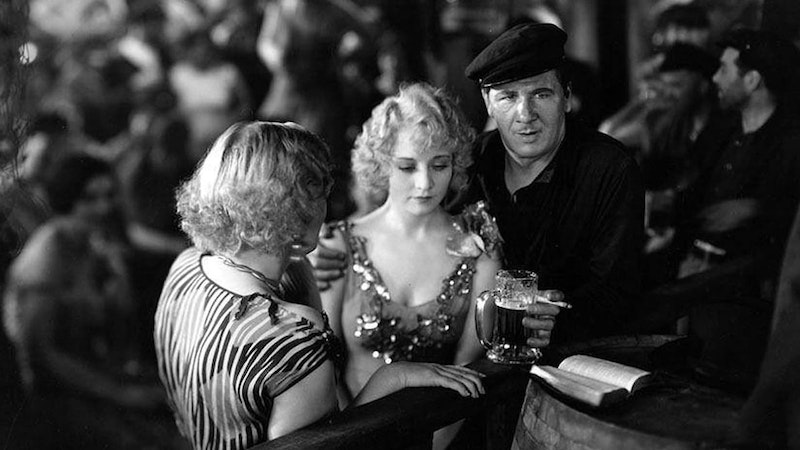 There aren’t many directors in the long tradition of cinema that are capable of creating atmospheric images quite like Josef von Sternberg. His primary mode of being as an artist is light, and the progression of his work proves a continuous unfolding of demanding aesthetics. In other words, to watch a film by Josef von Sternberg is an experience into which the viewer must be willing to plunge.

The Docks of New York (1928), another silent film, is no exception. The film didn’t do as well in the box office as von Sternberg’s previous ones, but it has remained steady and found its place in the history of cinema. The plot’s simple and often meandering but this is the case with much of von Sternberg’s work. Even his masterpiece, Shanghai Express (1932) isn’t heavy on plot but von Sternberg rarely concerned himself with that. Much like in an opera, the story line is incidental, and it’s the larger literary and cinematic tropes that provide the chronological movement.

George Bancroft plays Bill Roberts, the stoker who works on the docks. Like most stokers, he doesn’t stay long on the docks, and waits for another ship to take him to another place. He’s unattached and free. Or so it seems. One night, he rescues Mae (Betty Compson) from a suicide attempt. Instead of leaving her on the docks to fend for herself, he takes her to a room, where her friend, Lou (Olga Baclanova) tends to her.

Seemingly, out of pity, Bill offers to marry Mae. At first, she puts on a “tough broad” demeanor. She doesn’t need a man, and besides, he should’ve left her alone in the waters of New York. But it’s not entirely clear who’s pitying whom. Both Bill and Mae are in a way pathetic characters, moving through the grime of society (in Bill’s case, grime because of his job) without any thoughts of settling down and living a normal life. Yet they can’t stay away from each other.

The film’s drawn out, yet the plot actually takes place within two days. In those few days, Bill and Mae marry (in a hilarious ceremony presided by a parson, humiliatingly and endearingly called by the docks’ crowd, Hymn-Book Harry), Lou’s husband (who also happens to be Bill’s superior at the docks) is a scoundrel who goes after Mae. In an effort to save her friend, Lou shoots her husband. Mae is falsely accused, Lou admits to the shooting, and Bill realizes that he actually loves this “dame,” which is reciprocated.

At times, The Docks of New York is overly sentimental, but this has no connection to what we may see as maudlin. This is a sentimentality particular to the silent cinema: the expressions, the gestures, the tears, the embraces, and the kisses—all of these represent a unique vocabulary of the silent cinema. Just as the characters long for one another, and for a better life, so are we taken by their existential changes of toughness and vulnerability.

Von Sternberg knew how to illuminate human vulnerability at the precise moment. What makes his vision even more unique is that his characters can go from deep and tortured emotion to laughter and comedy. They’re laughing off their fate in order to remain strong in the face of reality that they’re mere mortals. In The Docks of New York, this is true of almost everyone. Lou thinks she has an upper hand because she cheats on her husband, who, in her defense, is always absent and pretty much does the same thing. For Lou, marriage is a prison, and she tries to convince Mae not to get married. It’ll all end the same way—in sorrow, anger, and emptiness.

Lou even shows some jealousy and perhaps sexual love and attraction toward Mae. She wants to possess her, because she feels alone in her own pitiable life, and at the same time, there’s a glimpse of a feminist in her as well. Who needs men, she implies throughout the film. They only use us, so it’s only fair that we use them. But in this attempt at a masculine bravado, Lou fails, and shows her vulnerability. But these moments are short, and they never lead to an epiphany that might change her station in life.

It’s difficult to have empathy for any of them. Even the anonymous crowd is a just a bunch drunks and whores, who are the refuse of society. Yet von Sternberg doesn’t treat them like that. Like extras in an opera, they become spectators of Bill and Mae’s marriage as the entirety of a love affair and marriage plays out in just a few days.

Strangely, none of these people’s lives matter that much. This isn’t to say that we, as the audience, don’t care for them. Rather, von Sternberg inserts their own drama (serious or maudlin) into the larger picture of New York. At the beginning, Lou and her husband fight in a local bar, on the verge of deciding whether they should remain married. It’s an exquisite moment of tenderness, yet von Sternberg pulls the camera slowly away from them. The focus still remains on these two people, yet a bar brawl is happening at the same time.

At the end of the film, when Bill leaves the ship to come back to Mae, she finds out that she has been arrested for being in a possession of stolen clothes. He enters the courtroom, and defends Mae, admitting that it was he who stole the clothes for her, yet he doesn’t reveal that Mae attempted suicide to save her from being an even further outcast. The judge decides that Bill will spend 60 days in jail for the theft, and Mae decides that she will wait for Bill.

The camera begins to pull away from Mae as another batch of people enter the courtroom to stand in front of the judge. Even here, in this touching moment, the main characters become the background to the larger drama of New York. They’re the forgotten ones, the dregs of society, in a city that couldn’t care less about one more suicidal girl, or a stoker who wants to have a normal and straightforward life. The docks are enshrouded with night and fog, and life is just a series of accidental encounters that have no permanence. Yet, Bill and Mae, despite themselves, somehow manage to extend the light for 60 days at least. And then, there’s the day after tomorrow, and the fog might lift.