Welcome Back to Jackass

The spirit lives on in Jackass Forever, so durable and timeless, immune to any changes in the culture of comedy. 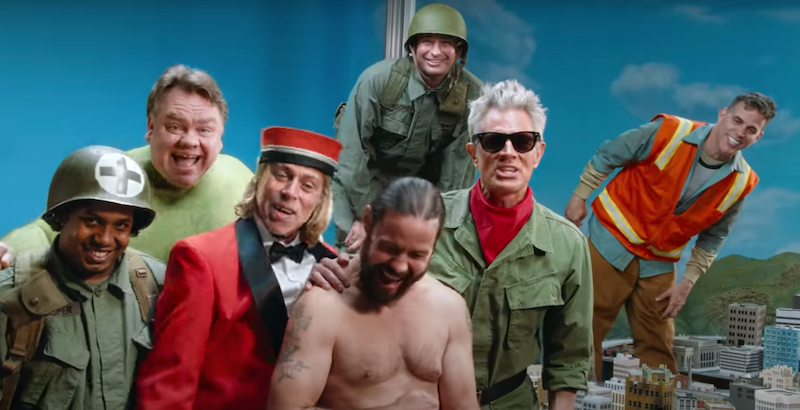 Jackass has returned, after a nearly decade-long layoff, with its fourth movie,  Jackass Forever. Key members of the original crew are missing, and most of the surviving stars are either pushing 50 or beyond it. None of that matters. The Jackass franchise's formula is so durable and timeless, that not only is it just as funny as it always was, but it's all but immune to any changes in the culture of comedy. The tiresome "cancel culture" debates of today don't touch Jackass in any way, because the humor is simple and so gut-level.

The new film is again directed by Jeff Tremaine. There's some gross material, and a lot of bad things happen to men's penises and testicles, even by the historical standards of this franchise. But as in the previous three Jackass movies, the laughs are consistent. As with most of Jackass history, the bits fall into a few different categories. Some are creative stunts inspired by skater culture, while others are pranks, played by some members of the crew on others. Some are hidden-camera setups where the joke is on the unsuspecting public. Others just go out of their way to emphasize shock value, whether it involves genitalia, bodily fluids, or animals.

Some bits are funnier than others. But the joy is in watching them all in a row and being surprised over and over. I've always considered Johnny Knoxville's routine where he dresses as an old grandfather my least-favorite part of Jackass and had trouble sitting through that character's spinoff movie, Jackass Presents Bad Grandpa. But his deployment here is one of the better parts of the new film. That Knoxville's hair turned white seemingly overnight during the production of the film is another concession to age, if it's not a homage to Leland Palmer from Twin Peaks.

I saw Jackass Forever on the same day that Tom Brady announced his retirement from the NFL; Brady was drafted in 2000, the same year Jackass started on MTV. The Jackass crew has been at it for more than two decades, and it's always been my assumption that these guys suffered many of the same maladies common to football players and pro wrestlers: Concussions, chronic injuries, and subsequent drug addictions. At least a couple of the cast members have been open about that, while Knoxville suffered a concussion in the new movie, in a scene where he gets leveled by a bull.

But the cast member who suffers most in the new film is Ehren McGhehey, who not only gets hit in the nuts numerous times, but has one scene—involving a chair, a lie detector test, and the sudden appearance of a large scary animal—that more resembles psychological torture than any type of stunt. McGhehey, long a tertiary member of the cast, is the new film's MVP.

Aside from the aging, and clear pandemic conditions of the production, the most notable change is the cast turnover. Ryan Dunn died in a 2011 car accident, while Bam Margera was fired early in the production of Jackass Forever, reportedly due to his failure to comply with a mandated sobriety plan. Their departures mean the crucial suburban Philadelphia contingent of the Jackass crew, including Raab Himself, Brandon DiCamillo, and Rake Yohn—as well as Margera's parents and frequent prank targets, April and Phil—are no longer in the fold.

The group has therefore added some new faces. There’s the first woman member of the Jackass cast (stand-up comedian Rachel Wolfson) and the first two Black people (Jasper Dolphin and Eric Manaka.) Jasper is joined, in a couple of scenes by his ex-con father, known as "Darkshark," who’s responsible for one of the film's most memorable moments, involving a plastic tube and a tarantula.