Jackass Forever is the weakest of all four movies, but still offers so much that American cinema doesn’t. 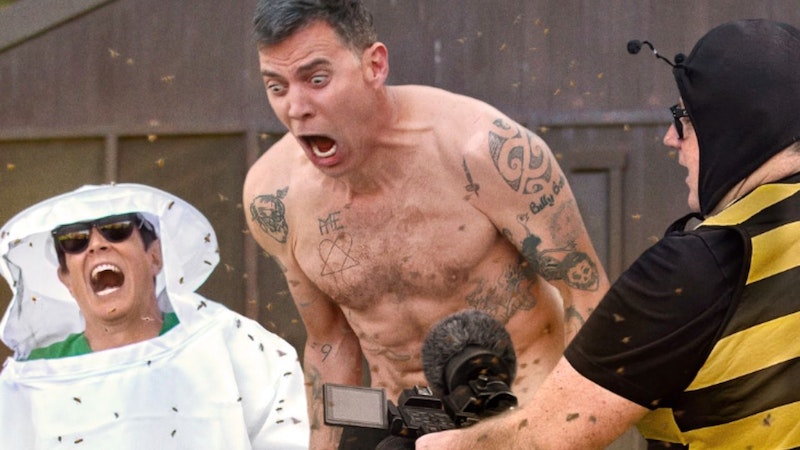 I love Jackass, but The New York Times’ Amy Nicholson goes a bit beyond: “Jackass remains the most shocking theatrical experience since the mythic mid-1890s screening of the Lumière brothers’ Arrival of a Train at La Ciotat Station. As a test of resolve, it has no rivals. The performers fling themselves into dumb and painful stunts on purpose, and blissfully weak-willed audience members cackle knowing that their laughter is proof that they haven’t grown up either.” After an insane superlative—“no rivals”? Off the top of my head: Cannibal Ferox? Salò? Titane?—she puts down the movie for being “not grown up,” in other words “childish,” in other words “bad.” I don’t think it’s healthy to grow out of the spirit that Jackass embodies and celebrates.

Bill W. of Alcoholics Anonymous is thanked in the credits, and Bam Margera appears in the cast list, but he’s barely seen, and I missed him. Fired early in production for breaking a sobriety clause, he threatened to commit suicide live on Instagram while people could see he had searched “how to tie a noose” and I missed all of this, too. Jackass Forever started filming two years ago, before the pandemic, and restarted shortly after—in Jason Acuña’s words, “We were Paramount’s test subjects” to see what filming under coronavirus conditions was like (it added a million dollars to the budget, a movie that only cost 10 million in the end. If anyone is wondering why Paramount bothers with Jackass, this is why. They’ve already broke even.

The first three Jackass movies were all released four years apart, beginning in 2002 after the show’s end on MTV. The first two are great, and while Jackass 3D opens with one of the group’s most ingenious, simple, and powerful bits—the Fecal Volcano—the rest of the movie was running on fumes. Steve-O was close to his nadir with drugs around then, and 10 years later, he’s sober for the sequel while Bam is out of the picture on bad terms. Both movies suffer from their absence and the caution that follows. Maybe “caution” isn’t the right word for Jackass—except for the warnings at the beginning and end to never try any of this at home—but without the core group together, it feels deflated and spent, and believe me, I’m glad Bam isn’t in this one, he’s annoying as fuck and it’s a miracle that Steve-O is alive. But these guys have run out of things to do to each other.

The incorporation of new members Jasper Dolphin and Rachel Wolfson, among others, is fine, but besides Wolfson’s participation in “Scorpion Botox,” none have a big moment. In fact, the only big moment Jackass Forever offers is the worst concussion of Johnny Knoxville’s life, and it’s tough to watch because you know it took years off his life. And this is a stunt we’ve seen before, as the movie reminds us. The reviews for Jackass Forever are the best in the history of the franchise, a sign that cultural standards have been lowered and that arbitrary snobbery has, for the most part, disappeared. There’s a freedom and camaraderie in Jackass and with their crew that’s missing from all other violent American cinema. When Steve-O or Tyler, the Creator gets electrocuted or randomly tasered by a crew member, no one is mad, everyone is ecstatic.

Violence, pain, and masochism aren’t the only avenues for release like this, but the beauty of Jackass is its celebration of bodily anarchy and enduring friendships. The stunts, bits, and gags aren’t nearly as good this time, but this is the last one, so go see grown ass men get concussions, stung by bees, locked in pitch black rooms with snakes, and skateboard guillotined while you can. I will say, if you’ve never seen a Jackass movie or any of the shows, Jackass Forever might be a revelation, and you will see the light—through Steve-O’s asshole.