Patty Jenkins’ 2003 Monster argues empathy for Aileen Wuornos by sharing the softest thing about her hard life: her love story. 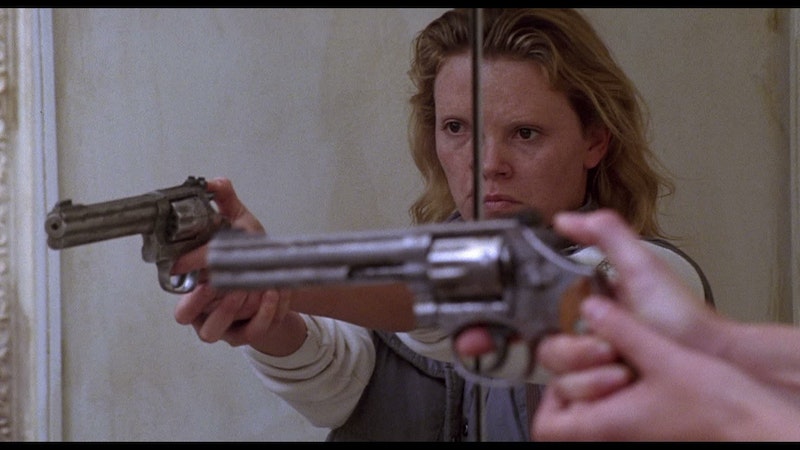 When was the last time you were touched? Really touched, not necessarily sexually, just a physical expression of love? Most single people have been touch-starved since the pandemic began. People cope with this emptiness in a lot of ways. Some focus inwards, learn to be alone, or find other ways to build relationships and be social. Some people lean into casual sex to feel skin on their skin, sometimes they pay for it. Sometimes, to get through the pain, people take things without permission; sex, money, lives. They suppress their loneliness and act out violently when the dam breaks. Loneliness is the origin of most harm, justified or not. Aileen Wuornos was a product of a lifetime of rejection and touch starvation. Patty Jenkins’ 2003 Monster argues empathy for Wuornos by sharing the softest thing about her hard life, her love story.

Monster contains very little violence. There are so many true crime productions bolstering every gut-wrenching detail of Wournos’ terrible life and the resulting crimes. Wuornos’ story is touted as “America’s first female serial killer,” and is placed among the likes of Jeffrey Dahmer, Ted Bundy, and all the other American rippers. Everyone around Wuornos took, exploited, and mocked what they could. Monster is different.

Monster is a love story. It’s about the hope and fearlessness love makes us feel. “I got you now, I got everything going for me,” Aileen says to her girlfriend Selby. Jenkins wants the audience to empathize with what drove Aileen to do what she was sentenced to death for; she wants us to feel the highs and lows of the end of her life. She connects audiences to Wuornos by her love story with the fictional Selby Wall, a stand-in for Wuornos’ real life girlfriend, Tyria Moore.

The name of Moore’s character was changed to avoid potential legal action from the real Moore. But in a way, the fictionalization of Wuronos’ girlfriend creates the potential of Wuornos’ fantasy of everlasting love to come true. Even though Moore sold her story in media deals and never spoke to Wuornos after the trial, maybe Monster’s Selby Wall would stay with her until the end. The film ends in a montage of the arrest, trial, and imprisonment of Wuornos. It explains Moore’s aiding to Wuornos’ arrest but room is left for interpretation of where Aileen and Selby stand after the credits roll.

Despite the name change, Jenkins' portrayal is close to the truth. Jenkins sources the story from the confession that Wuornos gave in a much-later interrogation after her arrest. This confession was dismissed by the court because it contradicted her initial confession, which was recorded and leaked to the public before trial. In the initial confession, she was focused on exonerating her girlfriend Moore from any involvement in the crimes. She’d just been arrested, had no idea Moore was assisting the investigation, and no lawyer. Her stressed demeanor cemented her cold-hearted killer status with the public before any chance of a fair trial.

Jenkins brings Wuornos’ swept-over truth of terminal suffering to the forefront of the film’s narrative. Wuornos’ endurance, her fight for survival as a sex worker with a criminal record, barring her from jobs with paychecks and stability, is the film’s exposition. “I’ve been hooking since I was 13, so who am I kidding. I’m a hooker.” She’s constantly reminded that the world won’t ever let her be anything but what they think of her. Jenkins interjects scenes of probable circumstances Wuornos went through, like at a job interview facing the massive barrier to entry to even the lowest rung in the respectable employment role. Or Wuornos’ attempt at accessing resources at the Unemployment Office, but failing due to her criminal record from solicitation. “‘All you need is love and to believe in yourself. Nice idea. but it doesn’t always work out that way.”

These scenes of institutional failings precede the introduction to Richard Mallory, the first man Wuornos kills. Jenkins builds up the desperation forcing Wuornos back into sex work, despite not wanting to have sex for money anymore. Then Wuornos goes through every sex worker’s worst nightmare. Everything that happens on screen is verbatim from Wuornos’ later confession. Mallory solicits Wuornos for sex, drives to secluded woods, beats and restrains her with rope. She endured a head wound and hours of rape and sodomization from Mallory. She manages to get herself loose and shot him with her gun. Wuornos finds a hand saw and other dismembering equipment in his trunk. Mallory was planning to murder Wuornos after the sexual torture and violence. Post-trial, it came to light that Mallory had previously served 10 years for violent sexual assault in another state, a fact that was barred by the judge in trial and rejected as a cause for a mistrial.

Jenkins shows Wuornos’ ensuing crimes as reactions to the unsubtle misogyny from the following johns. Wuornos’ has PTSD from the Mallory incident and all the other sexual violence she has experienced since childhood. After Mallory, she thought she was fighting back. She was in survival mode. And she finally had someone else to fight for, her girlfriend and their future together.

Wuornos had been through enough harm for 10 lifetimes. She deserves her love story and Jenkins gives that to her post-mortem. The scene where Wuornos and Selby meet, the film’s tone goes full romantic comedy. Wuornos tells Selby, “I don’t like chicks,” and by the end of the night they’re making out. It’s bewitching to see Aileen’s defensive shell melt with Selby. They go roller skating and Wuornos helps the inexperienced Selby balance on her skates. The anticipation of their first kiss builds as Wuornos skates backwards, holding Selby as Journey’s “Don’t Stop Believing” plays. An especially sentimental song for everyone from the Detroit area, like Wuornos. “Born and raised in South Detroit/He took the midnight train goin' anywhere.”

Wuornos and Selby’s sex scene harkens back to the film’s opening monologue. “They would see me for what I could be and think I was beautiful. Like a diamond in the rough. They would take me away to my new life… and my new world… where everything would be different. Yeah. I lived that way for a long, long time. In my head, dreaming like that. It was nice.” Aileen just wanted to be seen. Selby’s the person that finally sees her. When was the last time Wuornos experienced physical intimacy like she does with Selby? Has she ever been touched like this before?

Acknowledging the humanity in people who do awful things has been a concept since before Mary Shelley canonized it in Frankenstein. But Monster isn’t science fiction. Aileen Wuornos was a real person, with real emotions, and Patty Jenkins doesn’t want the viewer to forget that. This is what a Monster is, it’s human, it’s the vast expanse of love and hate that exists in each of our capabilities.