Women of Wonder Take Over 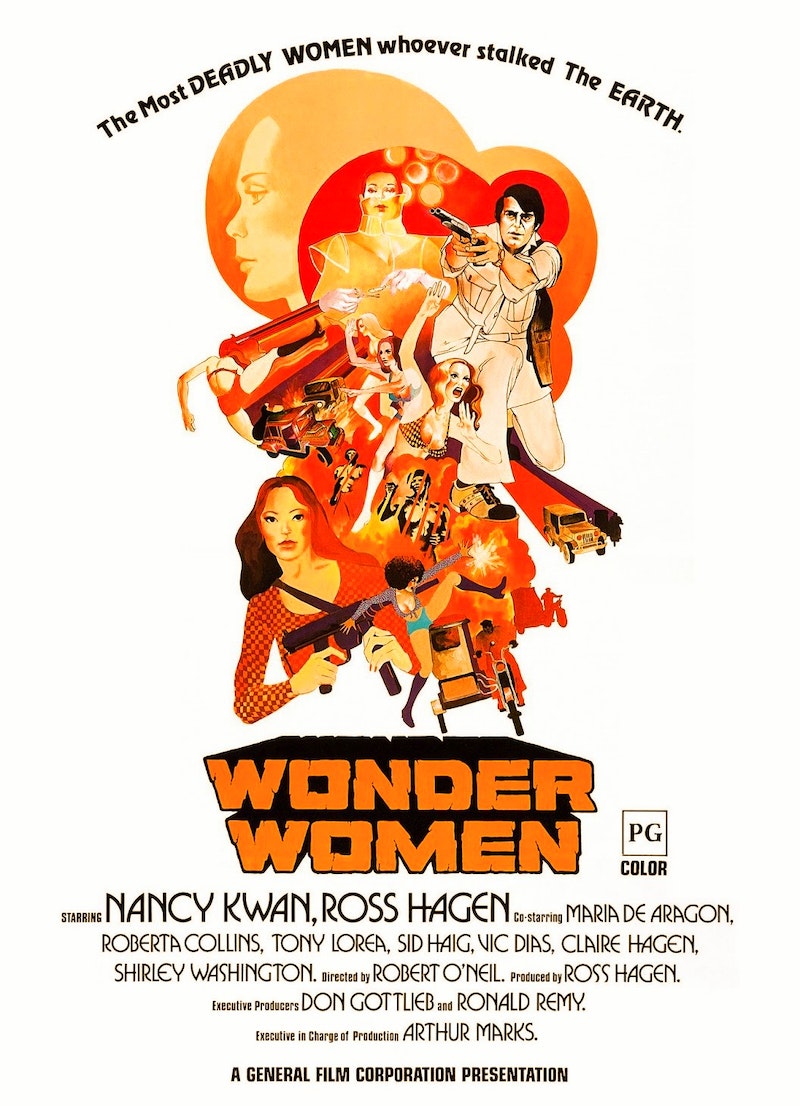 The 1973 film Wonder Women is a hypnotic tangle of ideas that unifies the earthy and impossible with the philosophical and visceral. It was directed and co-written by Robert Vincent O’Neil and produced by character actor Ross Hagen, who also plays the film’s surly hero, adventurer/insurance investigator Mike Harber. Hagen took a break from his successful mainstream TV career to helm this hybrid of art film pretensions and lurid exploitation.

Wonder Women was shot in The Philippines utilizing a panorama of locations in and around Manila. Loud concrete cityscapes, sweaty outdoor markets, lush fauna, sprawling public parks, layouts of mid-century modern architecture, and the cruelty of a cockfight arena envelops viewers. Though dominant visual themes stay carefully unfocused, Wonder Women‘s narrative thrust revolves around unethical science. It isn’t simply the twisted egomania of a scientist playing god that causes such chaos. Wealthy criminals operating above the law haunt the film’s main antagonists and their victims. Greed, vanity, and selfishness lurk around every corner, as do emissaries from the Philippines’ criminal underworld. Their nihilistic activity forms one of the darkest plot threads.

Mike Harber is contracted to aid in a missing person search. This leads the adventurer to a conspiracy where the youth and vigor of the mega-wealthy is preserved through the murder and suffering of anyone unlucky and attractive enough to snag the attention of mad cosmetic surgeon/eugenicist  Dr. Tsu (Nancy Kwan), cinema’s first (and only?) “sexy Dr. Moreau.” She lives on a tropical island in a giant fortress protected by an army of hot young femme fatales (presumably, these are the titular “Wonder Women”). The sci-fi elements are obscured by shots of half-naked women engaged in violence and torture. It’s a power dynamic more often seen in erotic films and porn—nudity and vulnerability shamelessly attached to sadism.

Maybe Hagen and O’Neil had issues with women and created their movie as a way to subliminally live out sexual domination fantasies. If that’s true, this makes Wonder Women even weirder considering the fact that the film’s co-star was the producer’s wife, Claire Hagen, in the role of bad girl-gone-good Vera. The Hagens share a violent chase scene that rivals the famous San Francisco smash-up from Steve McQueen’s Bullitt. Mrs. Hagen bares plenty of flesh throughout kicking off the sequence with a bed room battle that veers dangerously close to sex assault.

Another theory explaining the film’s use of sexploitation—the most logical one—comes from a business perspective. Wonder Women‘s concept was so odd that its studio backers (American National Enterprises and fly-by-night entity General Film Corporation) probably couldn’t justify bankrolling it without at least one widely marketable element. Film studios across the world were still reeling from the then-recent mainstreaming of pornography. While the success of triple “X” blockbuster Deep Throat and its provocative ilk didn’t transform any major studio into a porn factory, the early adult hits did usher in a more open attitude toward on-screen sexuality. The large cast of talented, attractive support actresses made it impossible for WW to be a straight sci-fi thriller; the movie overflows with beautiful people. Both of the film’s backers specialized in grindhouse schlock, so they probably figured their predominantly lowbrow demographic could only stomach politically-charged sci-fi if it was served with a giant side of cheesecake.