Transfixed by Jeanne Moreau in Mademoiselle (1966) and Isabelle Huppert in The Piano Teacher (2001). 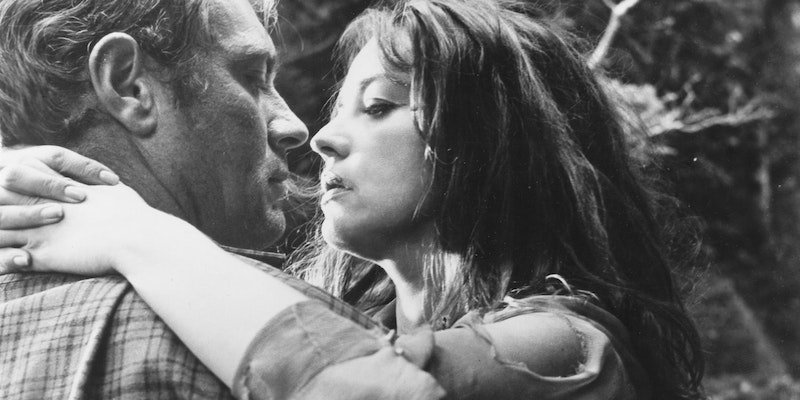 I want to stare at her face.

The poster for Mademoiselle (Tony Richardson, 1966) shows Jeanne Moreau on all fours, peering upwards. She’s framed by a pair of legs. Towards the top of the poster the image simplifies. The legs are cropped out and the focus is on her face, her attentive gaze. She looks like an animal waiting for a command. I knew nothing about the film when I first saw the poster, but the image suggested enough that Mademoiselle moved to the #1 spot in my “What to watch next” queue.

In Mademoiselle Moreau plays a stern schoolteacher in a rural French town. She isn’t warm and friendly to her students, and her expression is often difficult to read. The viewer isn’t granted much access to her interiority. By the end of the film we don’t even know her name. We never hear her addressed as anything other than “Mademoiselle.”

To relieve tension she orchestrates disasters in her small town. Setting fires excites her. In one scene we get to study her face as she applies makeup while sitting at her vanity. She has an aura of intensity; it’s evidently an important step in a private ritual. After applying eyeliner, eye shadow, and lipstick she opens a drawer where she hides an arson kit (boxes of matches and a pair of fishnet gloves). She goes out and sets a barn on fire. The light from the nearby blaze turns her placid face into a dynamic surface.

I find Jeanne Moreau endlessly watchable. She’s weary and sharp at the same time. She turns from frightening and rigid to vulnerable and swooning in an instant. The same could be said about Isabelle Huppert in many of her performances. I seek out films starring Huppert for the same reason I’ll watch anything with Jeanne Moreau in it. I want to stare at her face.

In La Pianiste Huppert plays Erika, a troubled and intense piano instructor. Throughout the film you watch her body and face react as she listens to music during recitals. Initially the camera is positioned across the room from her, then there’s a closer look, close enough to see her hands better. At first, she appears composed as her soon-to-be pupil (and object of desire) plays. Then her left hand scrunches and unfolds rhythmically on her knee. She stretches her neck, her eyes dart. The camera now frames her from the shoulders up. Is she experiencing pleasure? Sadness? Longing? Rage? When Erika’s tongue briefly escapes from her mouth it’s a seismic moment. Then she steadies herself and clenches her jaw again. Will the façade crack? Is she going to cry?

In Mademoiselle and La Pianiste there are glimpses of the protagonists’ complex systems of desire, but these illuminations don’t add up to understanding their hearts. This might equate to a frustrating viewing experience for some, but I find this depiction of desire moving in its honesty. Sometimes desire is an impossibly dense knot. You can pick and pull at it without making much progress in untangling the threads. The knot becomes harder and tighter.