Screening a Godard classic in the late-1970s. 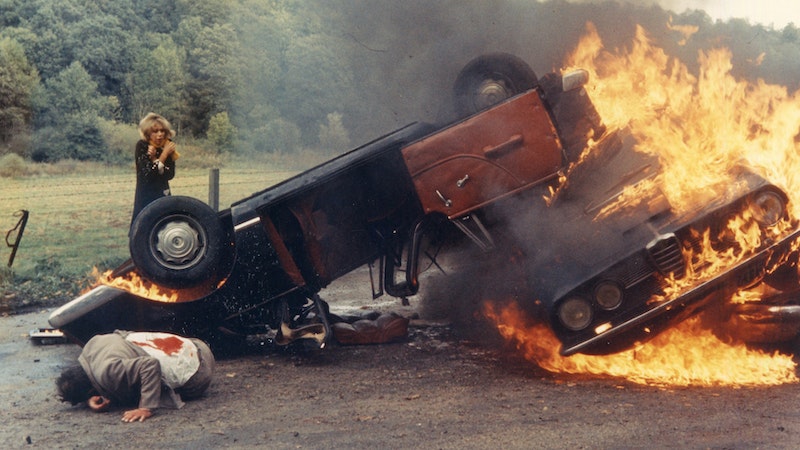 In the late-1970s, Jean-Luc Godard’s Weekend was one of the top five rentals at MICA (Maryland Institute, College of Art). One radical professor declared: “Voilà! The peak of New Wave cinema.” I felt like I belonged to a cult. I saw Weekend so many times as a young projectionist that I lost count. My bizarre job was operating a 16mm projector on a utility cart—or futility cart, as I dubbed it— pushing it around like a hot dog wagon to various classrooms.

Fulfilling a student loan agreement included part-time campus jobs to pay off my debt. I spent three days a week in a fenced-off space dubbed “The Cage” in Corpus Christi Church’s basement. The audiovisual department was located there, and all the camera, technical, and audio equipment was kept under lock and key. I oversaw organizing 35mm slide presentations and movie screenings in various classrooms in several buildings.

If it sounds archaic for the late-1970s, it was. Higher education was yet to go high-tech, and digital equipment wasn’t available. VCRs only hit market shelves in 1972. Camera stores still had shelves full of yellow boxes of Kodak film waiting to be chemically processed. Technology seemed stuck.

MICA was primarily regarded as a painter’s school for artists. There was no film department then, but there was plenty of film discussion and lots of movies were shown. The closest place to produce a film project was at UMBC, where experimental American director Stan Vanderbeek taught, and great cinematographers like Edward Lachman lectured.

Weekend was a discovery for some and an opportunity for others to doze off. You knew right away if you liked it or not. Over the course of a semester, a lot of experimental avant-garde films were screened; works by Maya Deren, Kenneth Anger, Jean Cocteau, Jack Smith, Ed Emshwiller, and Paul Sharits, to name a few.

Watching Weekend so regularly provided an excellent opportunity to observe audience reaction. The caliber of filmmaking was distinctly un-Hollywood. A variety of perspectives include attacking entitlement and wealth, revolution, voyeurism, the viewpoint of the camera, a satirical drama with repetitive narrative—everything made sense, or not. The film proved inspirational even to jaded students. Some took the initiative to create movies of their own.

More often, however, when the classroom lights came back on after a Weekend screening, and the instructor asked, “Well?” the classroom fell silent, stuck in a long, uncomfortable pause. Recalling another memorable critique, at the end of a screening, the lecturer stood up and said, “Okay, who hated that?” and everyone’s hand went up. “That means it worked,” he said.

Godard has another arresting scene in Weekend. This one distills the essence of a trademark shooting style, placing poorly-lit figures in dim available light. Obviously sensitive to trend, today it’s an overused technique that’s imitated and copied throughout movies and television series. A man and a woman have an intimate personal conversation in a dark room. They speak of what and when softly in French with subtitles, now that’s striking. In deep thought, she’s sitting in an excessive provocative manner, he cracks an egg into a bowel. Oui! Who wants an omelet?

Once more, Godard proves to be a relentless, compulsive experimenter who pushes against social norms. In a collection of work that spans decades, it’s just one of many reoccurring motifs. What about the chaos? Don’t panic; Godard, with his rebellious past, unveils a strategy and a plan. Are you watching a movie or is this the real world?