The Pez Outlaw is a new, funny documentary by Amy and Bryan Storkel. 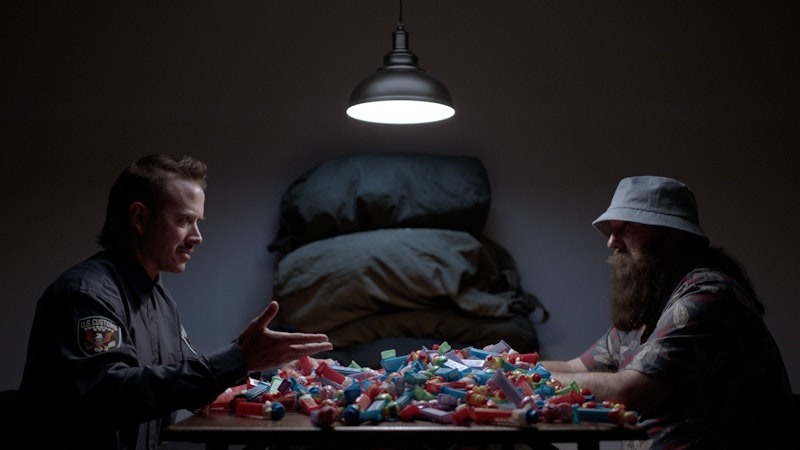 The Pez Outlaw is a funny documentary (directed by Amy and Bryan Storkel). No world or national politics, and most of the story takes place in the early-1990s. It’s a fascinating story of how an eccentric “common man” from Michigan ends up smuggling rare Pez dispensers from Europe to America and making millions selling them at toy and Pez conventions. Did you know there’s a big enough sub-culture of people who collect Pez dispensers who hold conventions? I didn’t, and for a little context, one person interviewed in the movie says she paid $11,000 for one Pez dispenser.

Steve Glew is the self-proclaimed Pez Outlaw, a fascinating person with OCD and a taste for Tom Clancy novels. Seeing his story develop, one can’t help but wonder what other characters there might be in the crowd of the nearest Walmart, if they were interviewed, though Glew’s story is unique—possibly because of the weird legalities of the Pez company: The main company, based in Europe, handles all distribution for the rest of the world, except for the United States, where Pez America controls which dispensers are sold. Bizarrely, the “Pezident” of Pez America decides not to import all of the various Pez dispensers, choosing himself which ones to sell. The filmmakers don’t give an outright opinion, but leave it up to the Pezident to show viewers that he’s a control freak.

Glew’s obsessive personality leads him to fly to Europe and go directly to Pez factories, where he befriends high-ranking Pez managers and designers and then, legally or illegally, buys samples and/or rejects and/or test runs of Pez dispensers unavailable in the US. Whether the managers are selling under the table (as Glew asserts) or he’s buying them clandestinely from factory workers (as the managers assert) is left up in the air. Glew, though likable, isn’t necessarily a reliable narrator, though neither are the Pez executives (for more legal reasons).

The Pez Outlaw is told through interviews with Glew, Pez executives and various Pez collector friends of Glew, along with his delightful wife. Mixed in are “reenactments,” a device more and more popular in documentaries these days. These reenactments add a bit more of a movie feel for viewers, a little more action than just watching people sitting and talking. The directors portray Glew's perhaps-hallucinations/fantasies, like the scene where Clancy-esque special-ops soldiers rappel into the factory where he works. It’s funny, it got a laugh from the film fest audience where I saw it in Bend, Oregon. I think it added a layer to our understanding of Glew which we wouldn’t get from just him telling us that he’s OCD, though there’s the question of a documentary fictionalizing aspects of a story—if something in a documentary is no longer factually true, is it still true?

Glew as the Pez Outlaw captures the American Dream: the small business (and his Pez smuggling does become a business, with employees) which makes millions while taking on a big corporation. Glew has a Robin Hood feel, which the filmmakers play up, though while he’s (maybe) robbing the rich, he’s not giving to the poor. The tension of his story comes when the Pezident strikes back. Though it’s never quite clear why—Glew doesn’t seem to be affecting sales of the regular American Pez dispensers. The Pez collector phenomenon would seem to help regular Pez sales. But this is ultimately a tragedy of egos.

Ultimately, the legality of what Glew does is never clear to anyone. The Pez Outlaw documentary comes out of the underground popularity of Glew’s Pez Outlaw Diary blog. He’s now a hero on the Pez Convention circuit, while living a quiet life on a Michigan farm. The documentary hasn’t been picked up by a major distributor and is making the rounds of film festivals. Watching the odd cast of characters, especially Glew and his wife, on the big screen was a treat, with all their facial expressions and quirks, but wherever The Pez Outlaw ends up appearing, I recommend it. A film for everyone.

—Steve Glew’s story in his own words at his Pez Outlaw Diary.