Lost Highway alternates identification between predator and prey, killer and victim—often within the space of a single scene. 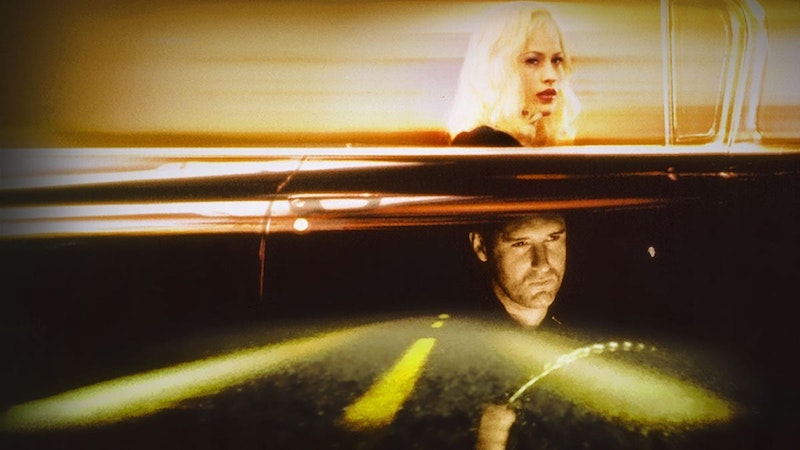 As the Criterion Collection slowly makes its way through David Lynch’s formidable filmography—Eraserhead, The Elephant Man, Blue Velvet, Twin Peaks: Fire Walk With Me, and Mulholland Drive—its brand new Lost Highway 4K UHD/Blu-ray arrives just in time for Halloween. Lynch’s films occupy a peculiar space in Halloween movie-watching; besides The Straight Story, each film could, to varying degrees, be described as horror, though they’re not horror movies in the classic sense. Unlike most horror, Lynch’s films don’t derive their scares from the extraordinary (i.e., ghosts, masked killers, or monsters), but instead infuse the ordinary (think the picket fences of Blue Velvet, or the backyard barbeque in Inland Empire) with cosmic dread.

In his article for Premiere Magazine on the production of Lost Highway, David Foster Wallace distinguishes art films from commercial films, noting that art films aim to “wake the audience up” or “render us more ‘conscious,’” while a commercial film “doesn't try to wake people up but rather to make their sleep so comfortable and their dreams so pleasant that they will fork over money to experience it.” Horror movies exist outside Wallace’s definition of commercial movies in one specific way: instead of a dream, people pay for a nightmare—to vicariously experience violence, terror, and agony.

Lynch’s films are nightmares, too, but Wallace contends they function in an entirely separate way: “You don't feel like you're entering into any of the standard unspoken and/or unconscious contracts you normally enter into with other kinds of movies… if we know on some level what a movie wants from us, we can erect certain internal defenses that let us choose how much of ourselves we give away to it. The absence of point or recognizable agenda in Lynch's films, though, strips these subliminal defenses and lets Lynch get inside your head in a way movies normally don't.”

The absence of a clear point or agenda—not knowing what he wants from his audience—is a major barrier to Lynch’s work for many critics (Roger Ebert on Lost Highway: “Does any scene in this movie have a point?”), but it’s a mistake to think his films aren’t about anything. Lost Highway—which I’d long dismissed as “minor Lynch,” a shallow assessment in hindsight—is the perfect example of a Lynch film, if anything, being about too many things: Los Angeles (an anonymous crew member told Wallace to read City of Quartz to understand the film); psychosis; O.J. Simpson (whose trial concluded weeks before shooting began and was a cited source of inspiration); identity; film noir; man’s crippling fear of female sexuality; and how man’s twinned impulses, to protect women (Pete) and to destroy women (Fred), can mirror each other.

On the latter, it’s difficult not to read Lost Highway as a slight corrective to Twin Peaks’ supernatural plot thread, specifically the way in which the demonic Bob’s possession of Leland Palmer arguably absolves him of guilt for the abuse and murder of his daughter. Lost Highway’s closest thing to Bob is the pale-faced Mystery Man (Robert Blake), a lugubrious figure whose defiance of the laws of space and time carry an unnerving menace. The Mystery Man may be pure evil, but as he says to Fred (Bill Pullman) in their introduction, “You invited me. It is not my custom to go where I am not invited.” Unlike Bob and Leland, the Mystery Man does not possess Fred; on the contrary, the Mystery Man is a manifestation of something deep within Fred—maybe within all men.

That the seething, jealous Fred and his counterweight, the dopey, sweet Pete (Balthazar Getty), might broadly represent Men speaks to these characters’ archetypal design. One could argue there isn’t a single real character in Lost Highway, that the film is Frankensteined out of different noir tropes and archetypes—a little Kiss Me Deadly here, a little Detour there, and a dash of Vertigo—and they wouldn’t be off-base. But contrary to Wallace’s position that Lynch’s best films “tend to be anchored by well-developed main characters,” Lost Highway (along with Lynch’s follow-up, Mulholland Drive) features fairly one-dimensional characters, whose lack of personality seems intentional. In this sense, it may be the closest thing in Lynch’s filmography to a traditional horror film: it deals in archetypes (swapping a final girl for Patricia Arquette’s femme fatale) not to thwart identification but to ensure that it is not fixed to one perspective. Like the best horror films, Lost Highway alternates our identification between predator and prey, killer and victim—often within the space of a single scene.

This is important for a film about the inability to outrun your sins. O.J. tried, moving to Florida and playing golf, but never managed to fully shake the shadow of his past. If Fred does metamorphosize into Pete to escape the guilt of murdering his wife, Lynch suggests this escape is only temporary; he’ll morph back into Fred, and the cycle will repeat itself. Lost Highway’s Mobius strip structure implies this hell is never ending—a dark road where no matter how fast you drive, your true self will always eventually catch up with you.