WeWork: The Making and Breaking of a $47 Billion Unicorn is a disappointing documentary about a fascinating subject. C- 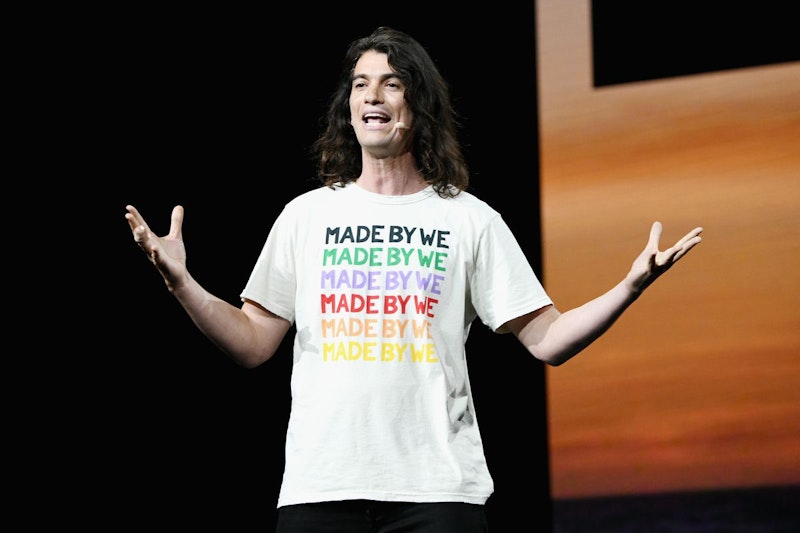 Adam Neumann had an ignominious fall as the founder and CEO of WeWork, but he's about to become a more ubiquitous media presence. And unlike fellow CEO-turned-documentary subject Elizabeth Holmes, he didn't have to commit clear federal crimes to do it.

Two limited series projects about WeWork have been announced—one starring Nicholas Braun and based on a book, and one with Jared Leto and Anne Hathaway, based on the podcast WeCrashed. The definitive book about the WeWork saga, Reeves Wiedeman's Billion Dollar Loser, remains un-adapted.

First is the documentary called WeWork: The Making and Breaking of a $47 Billion Unicorn. The film, directed by Jed Rothstein, debuted a few weeks ago at South by Southwest and hit Hulu on April 2.

The story of Neumann and WeWork is one of striking hubris, marked by wild character details and events that are hard to believe. Between the heavy accent, long hair, pie-in-the-sky dreams, and the overwhelming stench of bullshit, Neumann has drawn comparisons to The Room's Tommy Wiseau. The documentary mostly fails, because it doesn't scratch the surface of just how weird things were with WeWork.

Adam Neumann is an Israeli-American entrepreneur, whose idea for WeWork grew out of a desire to recreate his kibbutz from Israel, but with an ethos of capitalism instead of socialism (his co-founder, Miguel McKelvey, was raised in a commune on the West Coast). WeWork consisted of co-working spaces in cities around the world, with the idea of creating community among them.

The idea was successful at first, attracting huge amounts of venture capital investment, including billions from The Vision Fund, the fund operated by Japan's Softbank with money from the Saudi royal family. While a lot of suffering came as a result of WeWork's collapse, the most satisfying sidebar was that it cost the Saudis billions.

But Neumann and his wife Rebekah—a New Agey sometime actress and first cousin of Gwyneth Paltrow—got way over their skis with plans to make WeWork the center of American life. Also, the company began to resemble a cult in several key ways, including with "WeLive," which sounded like WorryFree, the dystopian living scheme from the movie Sorry to Bother You. Once Neumann's hard-partying behavior and dubious standards of corporate governance became a problem, he was pushed out, ahead of the company's planned IPO. The company went from a valuation of $47 billion to virtually nothing.

The biggest irony is that even if Neumann had done everything exactly right, and the IPO had gone off without a hitch, there still would’ve been a coronavirus pandemic. Commercial real estate still would've been decimated, and WeWork along with it. The biggest failure of the documentary is that it doesn't convey just how over-the-top the working environment was at this company. It doesn't help that the film didn't have access to Neumann, his wife, or anyone high up at WeWork; there are a few employees interviewed, but the majority of the talking heads are journalists.

Reeves Wiedeman, for whatever reason, isn't one of the journalists. I watched the documentary not long after finishing Wiedeman’s book, and was struck by how much more detailed his reporting was than what’s in the documentary, and how vivid a picture it painted of Neumann and WeWork, even without the benefit of video footage.

The book demonstrated that WeWork combined all the worst aspects of both the Silicon Valley startup and the New York real estate worlds, led by an eccentric founder who seemed to be drinking and smoking weed at all times. It also showed that the best time to stop the out-of-control founder is before the IPO, and not after.

The film, for example, gives us a look at "Summer Camp," an annual retreat in which everyone acted like kids, although it leaves out the detail about the drunken weekend when Neumann drove a jet ski to the other side of the lake, and was presumed missing for several hours. The story of WeWork might be better told as fiction, and luckily, it's going to be, several times. But the initial documentary treatment is a big letdown.