The Scarlet Empress (1934) and the madness of the Dietrich and von Sternberg aesthetic empire. 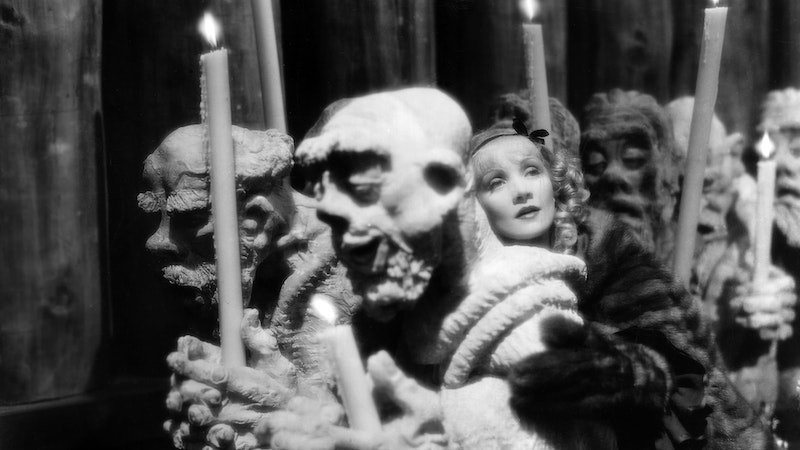 Realism was never the aesthetic route that Josef von Sternberg took in the films he made with Marlene Dietrich. Their sixth film together, The Scarlet Empress (1934), is ridiculously unrealistic, a series of images of exaggerated horror, comedy, and drama. Taken at face value and without regard for the volatile, master/slave relationship between Dietrich and von Sternberg or the historical significance of cinema, The Scarlet Empress is weird. Its weirdness is not meant to be a dismissal but an affirmation that Dietrich and von Sternberg engaged in such a cinematic absurdity that it brought forth its own singularity within their collection.

It’s a film loosely based on the life of Catherine the Great. Dietrich plays Sophia Frederica who marries the Grand Duke of Russia (Sam Jaffe). She leaves Prussia and is escorted by Count Alexei who’s already eyeing her as a possible sexual conquest. Played by John Davis Lodge, Count Alexei is both a parody of an archetypal heartbreaker and a serious lover. He assures Sophia Frederica that the Grand Duke, Peter, is a handsome, Greek god, and that she has nothing to worry about. At the beginning of the film, Dietrich looks like a doll with blonde curls and oversized dresses. She’s innocent bordering on permanent simple-mindedness; reminiscent of the plump Russian maid she played in Dishonored (1931).

Von Sternberg builds tension around the curiosity about the Grand Duke’s looks. When they finally arrive at the faraway land of imperial Russia, Sophia’s accosted by Empress Elizabeth (Louise Dresser) who promptly changes her name to Catherine. She informs her that she wants a male heir immediately. Sophia, or Catherine, timidly asks whether she can see the Grand Duke, Peter. At this point, there’s a bit of hope left that he’ll be handsome but instead we see a malevolent imbecile, who looks more like a rat that’s about to go mad. Peter’s inhuman.

Naturally, this sets out a series of events that are harmful to Catherine’s being: Empress Elizabeth is demanding, yet at times appears to be friendly; Count Alexei is a womanizer who wants to possess her; Peter’s mistress (who looks more like a faux-gypsy fortune teller than a lady fit for a royal court) is keeping her under watchful eye. Everything around Catherine adds to the absurdity, and this includes the royal castle that she now calls her home.

The sets are spectacular and disorienting, composed of statutes that induce nightmares. Twisted human forms that resemble creatures out of medieval cathedral reliefs, or taken from a Hieronymus Bosch painting, they stand reminding us of the awful destiny that has descended upon Catherine. The statues, which are also candleholders with dripping wax, are a mirror image of images of torture we witness at the beginning of the film. Young princess Sophia (played by Dietrich’s daughter, Maria Riva) imagines torture scenes from Russia, depravity and evil comes across the silver screen, and one is amazed at the audacity of such images. Nude females are burned on the stake, people are beheaded, whipped, and tortured in every possible way you can imagine.

Here we have yet another aesthetic juxtaposition, namely of Russian Orthodox imagery. Crosses and icons are everywhere but how authentic they are is open to interpretation. Everything is exaggerated, including the Orthodox icons, which appear to be dripping from their solid canvas and oversized doors, much like the candle wax. They’re distorted and surrealistically fantastical with no indication of Russian Byzantine faith or any theological meaning behind theotokos. Rather, these are images of horror strangely infused with comedy, bordering on slapstick.

Over time, Catherine begins to change her demeanor from a doll-like wallflower to a controlling and manipulative woman. But how she does that is rarely shown in the film. Von Sternberg use title cards that tell us about Catherine’s transformation. This creates an atmosphere of silent cinema but because it’s not a silent film, something is off balance. It’s too disruptive and scattered, and it’s clear that this film isn’t driven by plot.

Despite the fact that most of the film takes place in a royal palace, von Sternberg creates a sense of claustrophobia. The wedding sequence between Catherine and Peter is suffocatingly small. The ornate yet cold costumes, the ridiculous number of crosses, the physical closeness of people, and the camera’s focus on faces, look more like a medieval pub brawl is about to erupt than a royal and religious wedding. The spectators in this wedding ceremony are like groundlings in the theater, leaning on the stage, about to throw a bier stein on the actors.

The Scarlet Empress has echoes of Dishonored. Toward the end, Dietrich is caught in the world of soldiers and revolution but not to her detriment. Costumes are an integral part of Dietrich/von Sternberg productions and this is also the case here. Catherine sheds the baroque dress and emerges victorious in a man’s white soldier suit. She has finally become an empress and the mad Peter has been killed. But what kind of empress? The power of Catherine or Dietrich emerges in the final gaze as men who surround her proclaim their new empress. But this gaze quickly moves from power to possessed and demented madness.