The Impossibility of The Big Chill Today

The 1983 “Boomer totem” is alternately fascinating and contemptible, a document of generational luck and privilege. 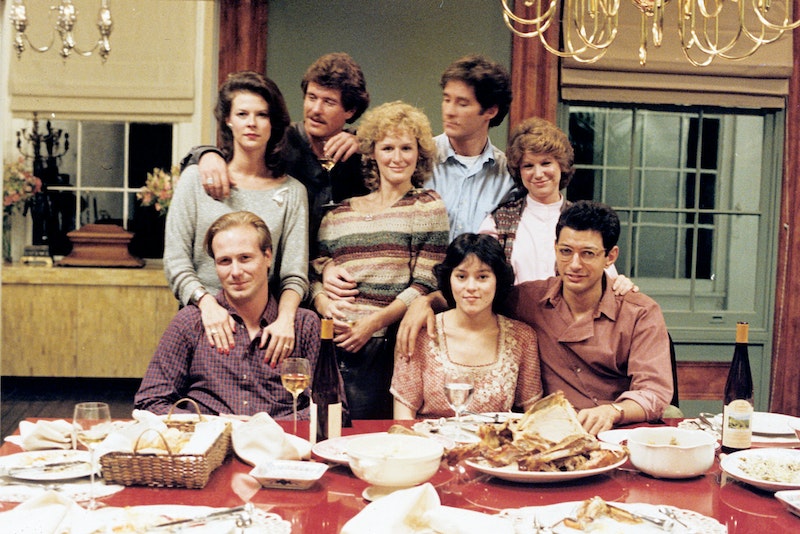 The Big Chill’s reputation, unfortunately, precedes it: a ubiquitous MOR soundtrack still clogging used record bins, an iconic poster as recognizable as anything else that came out in 1983, and even for those who haven’t seen it, a totem of post-1960s Boomer reflection, once wistful and “deeply serious,” now laughable, even contemptible. Then, too, there were nasty critics, and even those that liked it were disappointed that John Sayles’ similar and recently released Return of the Secaucus Seven would forever be overshadowed by this, a major Hollywood movie about Boomer angst with a soundtrack that probably cost millions of dollars to clear.

Few reviews of The Big Chill (directed by Lawrence Kasdan, fresh off a similar film, The Empire Strikes Back) published at the time of its release in 1983 expressed exasperation or anger at the immaturity and stultifying privilege of their comfortable but spiritually empty “adult” lives. Vincent Canby wrote a surprising rave, calling it a “deeply serious new comedy” and correctly praised it for “ensemble playing of an order Hollywood films seldom have time for, with the screenplay providing each character with at least one big scene. If the actors were less consistent and the writing less fine the scheme would be tiresome.” He adds that, “In The Big Chill it's part of the fun.”

The Big Chill is a miserable movie, not just because the entire premise is ghoulish (college friends reunite for the funeral of one of their own that committed suicide, OK—and then they have a long fuck weekend? Who mourns with their pants around their feet?), but because today, these people are unreal, unserious, and contemptible. This obviously is no fault of the film, and I can only rely on contemporary criticism (like that of my dad) to get a sense of how the movie penetrated and effected its audience in America.

Canby, a smart critic, was born in 1924, but the intervening years were busy, not just around the world but in popular culture. There were enormous shifts every decade in aesthetics, taste, habits, semiotics, and ways of doing things. Since the millennium, and particularly since 2008, pop culture and politics have see-sawed, but the situation of The Big Chill—college friends “grown up”—doesn’t exist today, because a college student in a post-2008 world is likely doing the same thing they were doing a decade ago.

I will say that The Big Chill, like Broadcast News, is a great ensemble movie. Roger Ebert, cooler on the movie than Canby, wrote as much: “It's well acted, the dialogue is accurately heard and the camera is extremely attentive to details of body language. It observes wonderfully well how its veterans of the 1960s have grown up into adulthood, consumerhood, parenthood, drunkenhood, adulteryhood, and regrethood. These people could all be wearing warm-up jackets with poignancy stenciled on the backs… The Big Chill is a splendid technical exercise. It has all the right moves. It knows all the right words. Its characters have all the right clothes, expressions, fears, lusts and ambitions. But there's no payoff and it doesn't lead anywhere.

Later, he relates receiving a piece of mail from a college student bemoaning an abundance of films drenched in nostalgia for the 1960s: Why should I or anyone else care? Ebert: “Because the people who make the movies were students in the 1960s, and that the teenagers of 2001 would no doubt be sick and tired of his generation's memories of the olden days of 1983.”

He was right, and they’re still sick of the 1980s today. I’m surprised by the lack of American films really focused on the 1990s. There have been a few—Teen Spirit, Mid90s, Her Smell—but nothing major, and nothing particularly good, either. There hasn’t been a Dazed and Confused for the 1990s, much less the 2000s, in American films.

Nor has there been any significant reckoning with the form even after the collapse of 16- and 35mm stock and the switch to digital. The most futuristic and forward-looking film I’ve seen in the last few years was made by an 87-year-old man, The Image Book by Jean-Luc Godard. Aside from a few iPhone videos somewhere in the Middle East, it’s composed of archival material. No matter: it explains the state of our world as it is: barren and full of death, a desert of diminished expectations. He says in groggy voiceover that he can understand throwing bombs if there’s no other outlet for popular expression.

There’s a stultifying refusal to look into the future, in every area of American life. Personal and relationship dynamics were mined to dust in the 2010s, and the level of political commentary in popular cinema in our country remains depressingly low—I thought Borat Subsequent Moviefilm was the funniest political comedy of 2020, but it wasn’t even “good” per-se, and its ending title card (“NOW VOTE”) just about ruined an otherwise pleasantly anarchic 90 minutes that recalled the more freewheeling and openly offensive comedy of the Bush 43 era.

But back to The Big Chill, once more and finally: for these people, “so much time has passed.” It’s true: Tom Berenger has become a relatively famous television actor, Kevin Kline owns a shoe store, Glenn Close is a doctor, Mary Kay Place is a corporate lawyer, Jeff Goldblum is a print journalist, and William Hurt, despite being a sexually disabled Vietnam veteran without a career or any steady source of income, can afford a nice car, nice clothes, plenty of cigarettes, and plenty of pills.

The adjustment and “growing up” of 1960s college students and members, deep or adjacent, of the New Left, is still being beaten on like so much stale bread, most recently with Aaron Sorkin’s The Trial of the Chicago 7. I don’t care about the New Left, to paraphrase Ebert’s reader, but it must be noted that their economic “growing up” period—when McGovern supporters became Reaganites—roughly corresponds to the length of adolescence. No wonder nostalgia prevails for a particular period stripped of meaning and material years ago.

Besides the doctors and housewives of the group, none of these jobs exist anymore. Goldblum mopes about his failure to write a novel, and the ignoble burden of writing for People. How tragic. Kay Place used to be a public defender, and while many inspired by Bernie Sanders and the resurgence of American leftism will likely follow similar paths, I don’t see many idealistic law school graduates rushing out with flowers in their hair waiting to defend protestors, rioters, drug dealers, and murderers pro bono.

I hope I’m wrong, and that no such about face will occur. That, I think, is “the situation,” as Pasolini called it in his final interview: he proposed a future of soulless consumerism destroying more of Italy in less time than Mussolini and Hitler’s fascism. That’s the future shown in The Big Chill, and I’m confident that if the choices on offer in 1983 existed today, there would be comparable films. But there is no “growing up” after 2008, and the world is at the mercy of “something new,” an unknown sector or “side gig” innovation that will come out of nowhere and spread everywhere just like Uber and Lyft did in 2014. This is much worse than the indignity of writing for People.

Ebert’s right that The Big Chill is “a good movie” technically, with solid work from Hurt, always perfect for slow-waters-run-deep type pricks (imagine him as the crack-smoking married LAPD Officer played by Tim Robbins in Short Cuts—would’ve been way too on the nose). And, like Broadcast News, its crucial dramatic moral dilemma no longer exists. The level of media manipulation in that movie is so minor it’s almost unrecognizable as a transgression now, and The Big Chill’s playful ennui, a collective throw-our-hands-in-the-air-and-give-up feeling that writer Thomas Frank rightfully detests, citing it as the height of Boomer navel-gazing and self-rationalization. I’m against “generational discourse” and believe that the emphasis on Boomers/Gen X/Millennials/Zoomers is an intentional effort to further fragment and pit people against each other who have more in common than not. Still, a document as “of its time”—not “dated”—as The Big Chill deserves attention for any critic or political person in America right now. This was a totem we’ll never have, for better or worse.