Marlene in a Monkey Suit

Blonde Venus (1933) is more grounded in reality (and melodrama) than the previous four collaborations between Marlene Dietrich and Josef von Sternberg. 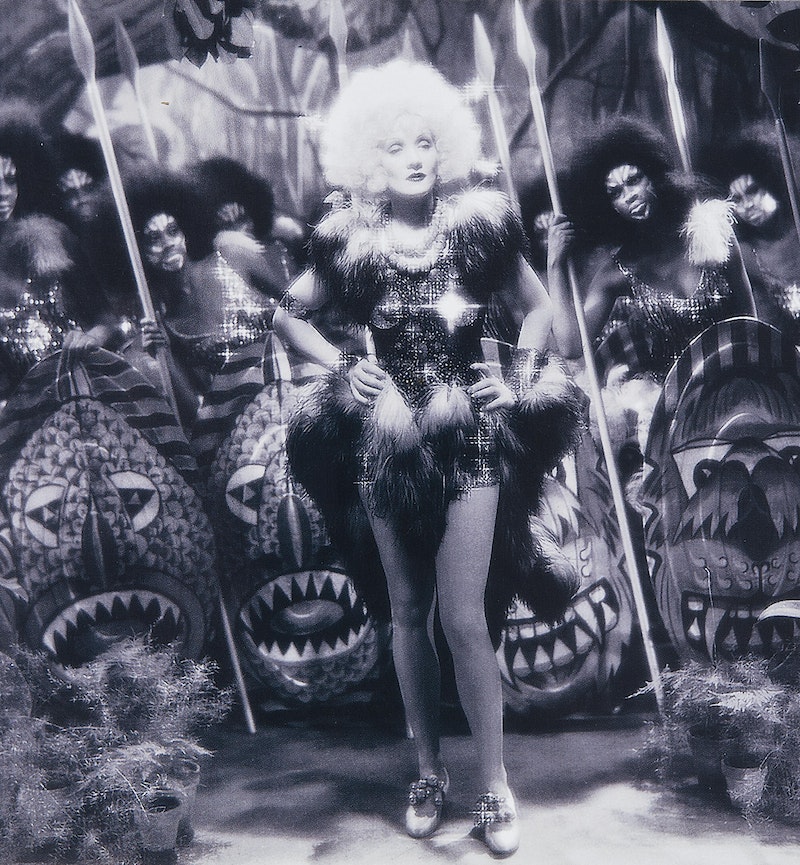 How many women can Marlene Dietrich be? According to the fifth film made with Josef von Sternberg, Blonde Venus (1933), more than one. Although Blonde Venus is primarily a story about a mother’s love, Dietrich moves through several personae in order to show the power of a mother’s unconditional compassion, care, and love for her child.

The story itself was Dietrich’s creation. Just like most of von Sternberg’s films (and certainly those he made with Dietrich), there are several levels that are chronological and aesthetic, which weave the story in a way that elicits tension and resolution. Von Sternberg is a director who works on the principle of spheres of life. The spheres of the sacred and profane, most ingeniously embodied in the persona of Dietrich, drive the action of the film. But it’s the aesthetic expression von Sternberg is famous for that reveals and conceals the metaphysics of both the person and the film itself.

Dietrich plays Helen Faraday, a German woman who marries an American man, Ned Faraday (Herbert Marshall). The opening sequence is dreamy. Ned’s a student in Germany, and during an excursion in the Black Forest, he and his friends hear the voices of women that are coming from a nearby river. As if encountering nymphs, the men are taken by the vision that’s before them. The women are nude, swimming, and one can’t help but think about the sheer audacity of such filmmaking at the time that makes it a fine pairing with Gustav Machatý’s Ecstasy (1933), in which a nude Hedy Lamarr has an orgasm.

The men are caught in their shameful gazes. But this isn’t a retelling of a myth of Diana and Acteon. Rather, Dietrich engages in a both playful and authoritative conversation with Ned. It turns out that she’s an actress and this makes Ned even more intrigued. Von Sternberg is a master of dissolves, and this is no exception. Helen’s body, which is forcefully flapping in the river, turns into a child in a bathtub playing in the water. This signifies a change in plot: Helen has married Ned and they have a son, Johnny (Dickie Moore).

They love each other and the family’s held together, despite the somewhat poor conditions they’re living in. Ned is working on a chemical formula that he intends to sell when he finds out that he has radium poisoning and needs treatment. Helen suggests that she can go back to being an actress and a chanteuse, and in this way manage to make money needed for Ned’s journey to Germany to receive treatment that will save his life.

At first, he resists, but Helen is completely secure and isn’t willing to listen to him. This is the third transition in Dietrich’s persona. She becomes a performer and re-enters into the world of sex, provocation, and games that runs counter to her role as a wife and mother. In the club, she meets a regular visitor, Nick Townsend (Cary Grant) who showers her with gifts and money. It’s with this money that Ned’s able to leave on a long trip toward his treatment.

Upon Ned’s recovery and return, he finds out that Helen has become Nick Townsend’s mistress. Disgusted, he threatens to take away Johnny. This sets Helen on the run, as she and Johnny become fugitives. Throughout the entire film, no matter what persona she is in (an actress, a performer, a prostitute, a homeless and destitute woman), Dietrich remains a mother. This is what makes it both incredible and strange. She’s every woman, yet none. She’s both genders, yet none.

After Ned catches up with Helen, he snatches Johnny from her arms. Dietrich appears to be unmoved, as she sits on the bench next to the train station. But the teary eyes and suppressed emotion is all that’s needed to convey the grief she’s feeling. Ned’s stubbornness proves to be unsuccessful. He and Johnny are living in squalor and he doesn’t have Helen’s touch in taking care of the boy.

Despite the fact that Townsend has his own self-interest in mind, he’s one of the clearest thinkers in the film (Cary Grant is not yet “Cary Grant” in his fifth Paramount Studio feature but a replaceable pretty boy. But there are traces of that comedic force that’re seen later in his other films). As much as he wants to possess and keep Helen to himself, he also logically realizes that this grief-stricken mother should be reunited with her child. He brings her to the doorstep of her former apartment but she’s afraid to cross the threshold.

Here, we witness an illuminating moment: Helen hears Johnny’s voice and becomes a woman possessed. She must see him and hold him once again in her arms. Without saying much, Dietrich’s face is powerful, with almost the same expression we see in Morocco when she hears the legionnaires returning from the front. We see two opposing forces—sacred and profane—that in some way, both involve a sense of sacrifice but for an entirely different reason and borne out of an entirely different love. Yet Dietrich manages to be all at the same time. This is von Sternberg’s and her genius at work.

However, there are moments in the film when the “real” Dietrich emerges and that’s when she sings lullabies to Johnny. She sings in German and her face is suddenly at ease. The power that is brought forth by the metaphysics of language is astounding. Dare we even say that in this moment, Marlene Dietrich is Marie Magdalena Dietrich?