Lives and memories shot through Italianamerican, Cape Fear, and The Irishman. 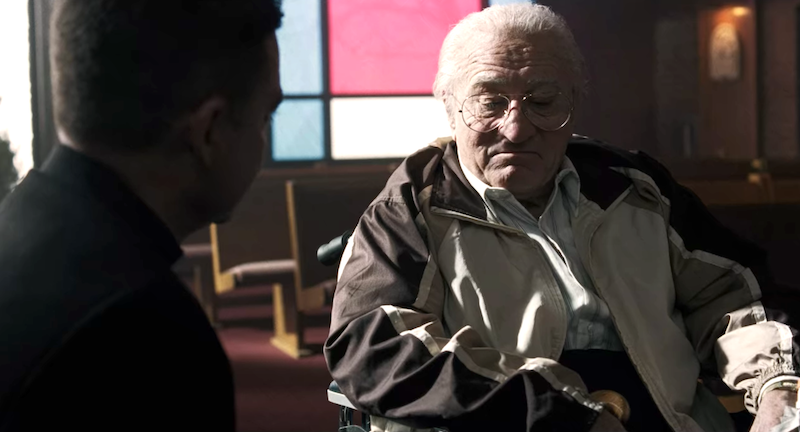 I like to joke that Italianamerican film is the greatest tool the world has known against the ongoing and insidious powers of anti-Italian sentiment that we still face today. I’m just being silly—but for real. Robert De Niro and Martin Scorsese had met and ongoing associations with Thelma Schoonmaker and Harvey Keitel had begun by now—1974—but this one takes it home.

The man himself, hair dark black then, his father resembling the man today. It’s a fundamental comfort to the central nervous system to witness Catherine and Charlie Scorsese tell you about how things once were and what they used to be. A sweater soft, good smells from the kitchen. Fourteen people to two bedrooms; tenements without plumbing—backhouses. When families were still rising in America. Sweet little lullaby, little little lullaby. It’s a real and spectacular, and rare, sweetness that you see here with Catherine—but they called her Katie—and Luciano—but they called him Charlie.

My dad was a bricklayer, and so was my granddad, and his dad too. All the bricklayers in Philadelphia are Irish or Italian, and it’s been that way since their own great-granddads came here seeking industry, or leaving behind famine or fascism. And a guy he worked with named George whose papa was a bricklayer too would take them all down to the Italian club some weekends, but he’d call ahead. If it were someone other than Rocco making the sauce, the bricklayers would find somewhere else to drink that weekend! What’s did Tobias Wolff write once about how its funny what you do remember given what you forget? Anyway.

It’s a sad fact of history that Cape Fear and that song, “Born to Die” by Lana Del Rey, didn’t align to be a part of one another. But you can imagine it if you want to. That video too is a fine movie in its own right. And it’s quite possible that no two people have ever looked so damn good before a camera as Miss Del Reyand De Niro. And Jessica Lange, Nick Nolte, and Juliette Lewis certainly do make for a handsome family. Sure be a shame if something happened to them.

A lot of Scorsese’s characters and even most of De Niro’s do what they do because they were born into it. Travis Bickle was a Catholic martyr. Cady had cause, but mostly Cady was just getting his kicks in. It seems like De Niro was too, Carolina accent thick as pea soup. Meaner than a junkyard dawg. Beats them boys up like a borrowed mule. And Cady’s gotta be Scorsese’s best dressed this side of Bill the Butcher. Or at least until Tony Pro came along.

I think maybe it is that playing against type, for Scorsese and De Niro both, really, that renders this one as underrated as I think it is. But I do think that you should rate it. Oh, and look out for our old friends Catherine and Charlie as customers at the fruit stand.

Italianamerican was the whoosh of a mother’s heart and Cape Fear the pulsing bursts of a carotid cut. The Irishman is something else. It gets you in the back of the teeth, the knees. But it’s all the way dry. Hoffa’s gone. And Skinny Razor, Boobie Kennedy, Tony Jack all lost and gone away too. Frank Sheeran died in a nursing home within spitting distance of the Philadelphia Main Line but that nice big room gets to look a whole lot more like a pine box at the end. Catherine and Charlie Scorsese are nowhere to be found, and their fine young son will hit 80 next year. In a bonus feature on the Criterion Collection edition of this fine film, Pesci, Pacino, and De Niro sit in conversation with Scorsese. De Niro jokes, regarding the de-aging technology used in the film of which you may have heard a couple of things about, “And it will let us act for 30 more years!”. And I think about this, if only that were true.

It’s not all so fuckin’ airless, though. From taking a flag up the mast over Teamsters HQ in response to the death of a certain head of state, to Hoffa’s love for ice cream and disdain for watermelon, to Scenes From A Florida Restaurant, to all that talk just all about a fish (via In Hoffa’s Shadow, a fine book written by his own adopted son, the real life Chuckie O’Brien confirms it was a salmon), The Irishman is Scorsese’s funniest film by a mile, and that’s not so narrow a category as you may think. With the exception of Raging Bull and maybe Kundun a real wit really just carries through. Mostly they’re funny until they aren’t anymore. This one is too.

But once it was beautiful, there was big money on the line, big money all the time. Christenings and children and stepchildren and it’s a Pennsylvania story, an expanse of country I’m certain Chateaubriand had in mind when in 1827 he came to this country and he wrote, “America still inhabits solitude, for a longtime yet her wilderness will be her manners, and her enlightenment will be her liberty.” Hoffa and his Teamsters broke the land just the same as Lewis and Clark did. And you see a lot of that in Sheeran and Bufalino’s passage through to Detroit, too.

One more Philadelphia Story of my own, and then I’ll leave you to it. When I first moved to that city I lived down South Philly a block off of where Joe Ramagama, third gen bricklayer, lived in the house where he and his dad grew up. My dad asked him to look out for me, and he did, I couldn’t have bought myself a drink within that square mile if I’d wanted to, and I didn’t. And the night before I moved down to that city my pep made us all cheesesteaks, said, “You won’t get a cheesesteak like this down South Philly. Well, no. Theirs are better. But this one is free.”

So here it is: Take your diced onion. Half an onion. Pan, a little bit of olive oil.

Spread them out, give them a minute. Then put the meat on them—minute steaks. The real beef ones. Keep chopping it all up in the pan as it cooks. Add in your pizza sauce, half the can or so. Once the meat is cooked, shape it into two columns, put your provolone cheese slices down over them. Two, three slices a sandwich. Then lay your rolls on top of that. Don’t let ‘em soak up too much grease. Flip ‘em onto the plate. Then there you go.

This piece has been excerpted from the April 2021 issue of The Servant.