We Pretend to Regain Hope

The Holocaust as a ghost story in Night and Fog. 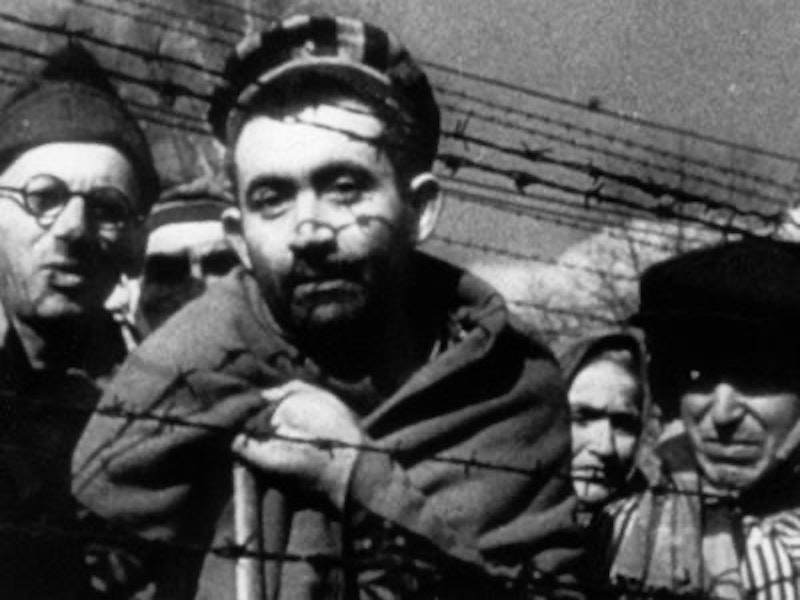 This is part of a series on fascism in film. The previous entry, on Casablanca, is here.

Most films about fascism are structured around a temporal narrative. Casablanca is a story; it begins with Rick (Humphrey Bogart) refusing to help a resistor escape to America from the Nazis. It ends with him embracing anti-fascism and resistance. What had been wrong is set right; disorder leads to order; virtue triumphs. The film was a metaphor for American participation in the war itself, and, already in 1942, a way to hope for victory. Rick, like America, was slow to enter the fight, but his entry, like America's, was decisive. The bad is (or will be) vanquished; the good is (or will be) triumphant.

Alain Resnais' half-hour documentary Night and Fog (1956) is less sanguine, in large part because the film isn't organized around narrative. Resnais assumes that viewers are broadly aware of the events of World War II and the Holocaust, but he doesn't re-tell them; there’s no recapitulation of Hitler's rise, Kristallnacht, or the orders for the Final Solution.

Instead, the documentary is structured around space. Ten years after the end of the war, the camera moves across the quiet, green landscape that used to be the Auschwitz and Majdanek concentration camps in Poland. The latter-day images of grass, barbed wire, and abandoned buildings are juxtaposed with archival footage of emaciated inmates, or of dead bodies being bulldozed. "As I speak to you now," the narrator says, "the icy water of the ponds and ruins fill the hallows of the mass graves, a frigid and muddy water, as murky as our memory. War nods off to sleep, but keeps one eye always open."

The narration was written by Jean Cayrol, a French poet and a survivor of the camps. The film conveys some information—it points out that camps had hospitals, brothels, and homes for the guards; it discusses medical experimentation on the inmates. But for the most part, Night and Fog isn't about facts, just as it isn't about narrative. Instead, it's an obsessive meditation on the way that the Holocaust is both gone and not gone. "Grass flourishes on the inspection ground around the blocks," the narrator says. "An abandoned village, still heavy with peril. The crematoria are no longer used. The Nazi's cunning is but child's play today. Nine million dead haunt this countryside." The Holocaust in Night and Fog is a ghost story. And the ghosts linger; there's no moment when they're laid to rest.

The United States and the allies won World War II; if you tell the story of fascism in Europe as a story, there's a happy ending. If you look at the events from the perspective of the victims rather than the saviors, though, that ending isn't happy, and isn't even an ending. Dead bodies flop into graves, turned into statistics without names. Even those liberated are frozen in time, scarecrows clinging to the border fence as the film pans over them. "When the Allies open the doors... all the doors... the deportees look on without understanding. Are they free? Will life know them again?" Not "will they know life" but "will life know them," the suggestion being that life has passed them by, stranded them in this place, and is reluctant to pick them up again. You can't free corpses.

Auschwitz falls outside of narrative, which means it can't be spoken about, and can't end. The film is a repetitive trauma, trying to speak about an experience which can't be spoken about. "Useless to describe what went on in these cells," the narrator says. And later, "no description, no picture, can reveal their true dimension." There isn't footage in the film of people actually put to death; such images were rarely recorded. Instead, the film shows pictures of people before a mass killing, and a close-up of a gas-chamber ceiling. The narrator explains, drily, that there are marks of fingernails in the concrete, where the dying tried to escape, but those marks aren't easy to make out on camera. The film can neither show nor tell, not because the Holocaust is too distant, but because it's too present.  Beneath its weight, history is flattened, frozen, paralyzed.

Paralysis isn't a very inspiring call to arms. Casablanca might make you ready to fight fascists; Night and Fog mostly inspires sadness, horror, bitterness, perhaps despair. The Holocaust happened and is still happening; the fascists look like everyday people in those archival pictures, and no doubt they look like everyday people now. "Who among us keeps watch over this strange watchtower to warn the arrival of our new executioners? Are their faces really different from our own?" That's a warning, perhaps, but it's also a disavowal of the usefulness of warnings. There's not much point setting up a watchtower at Auschwitz now, after the Nazis have done their work. The story is over; evil won; the victims are dead.

Melodrama is a call to political action. From Uncle Tom's Cabin to Casablanca, melodrama offers utopian possibility; it presents injustice, and introduces righteous men and women, who, actuated by the spectacle of wrong, sacrifice and work to bring about justice.

Night and Fog doesn’t leave much place for such heroics. The dead can't be healed; Auschwitz can't be undone. History doesn't need to repeat itself; it just lingers. "We pretend it happened all at once, at a given time and place," the narrator says at the film's conclusion. "We survey these ruins with a heartfelt gaze, certain the old monster lies crushed beneath the rubble. We pretend to regain hope as the image recedes, as though we’ve been cured of the plague of the camps. We turn a blind eye to what surrounds us and a deaf ear to humanity's never-ending cry."

Trump isn't Hitler, we're assured, as if Hitler was something special. Maybe we need to think he was, and that we defeated him, if we want to resist. But resistance, successful or not, doesn't lay the dead to rest.