We Don't Care About Your Conscience, Senator 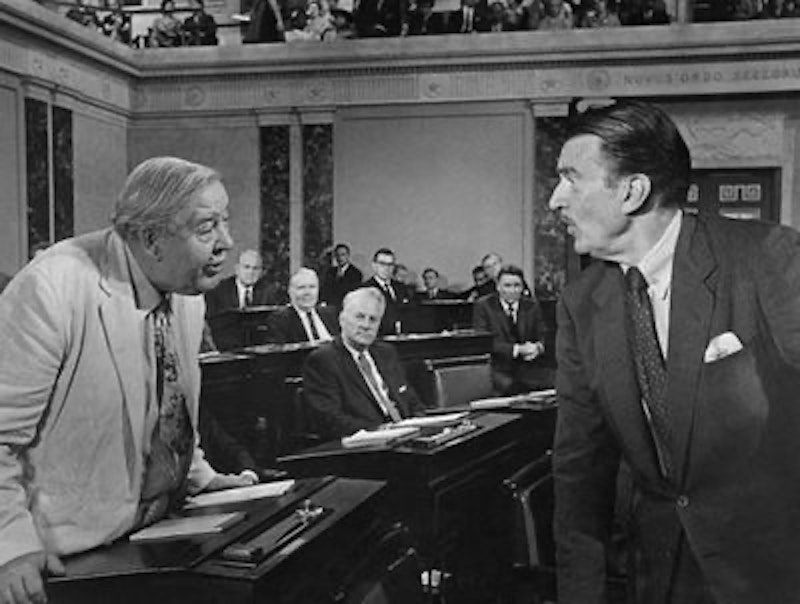 This is the sixth post in a series on political films. The fifth, on The Last Hurrah, is here.

The most famous film about the politics of the Senate, Frank Capra's Mr. Smith Goes to Washington, is notable for completely removing politics. Jimmy Stewart fights against the evils of corruption unhampered by the trivial concerns of ideology or faction; the only substantive question before the Senate is whether graft is good. (Spoiler: it isn't.)

The Senate in Otto Preminger's Advise & Consent (1962) is less vacuous. There are political parties, and though they're not named, they’re split by actual policy differences. And yet, even as the film acknowledges these parties exist, it seems to wish they didn't. Its happy ending is based on an imagined suspension of the political order: a one-time, unrepeatable détente in which all the pragmatic, wheeler-dealer, ideologically motivated senators pretend for a moment that they're in a Capra movie. Preminger can imagine politics, drama and morality, but not all at the same time.

Advise & Consent has an intricate plot, but in broad outline, the film focuses on the efforts of the President (Franchot Tone) to appoint Robert A. Leffingwell (Henry Fonda) as Secretary of State. Leffingwell is in favor of ramping down the Cold War; he's an egghead pacifist lefty ("I'm not only an egghead," he declares, "I'm a premeditated egghead. I set out to become an egghead and at this moment I'm in full flower of eggheadedness, and I hope to spread the spores of egghead everywhere I go.") Sen. Seab Cooley (Charles Laughton), the minority leader from South Carolina, opposes Leffingwell because egg-headed namby-pamby pacifists suck, and also because he has a (never explicated) personal grudge against Leffingwell.

The film is in part a noble repudiation of anti-Communist witch hunts; Leffingwell belonged to a Communist party cell briefly in his youth. Preminger also, remarkably (if ambivalently) repudiates homophobia. The conscientious Sen. Brig Anderson (Don Murray) had a brief homosexual affair while he was in the army. He’s blackmailed, and his escalating horror and despair makes up a large chunk of the film. Preminger is careful to let us know that Brig's homosexual encounter was a youthful indiscretion, and most of the gay people in the film are presented with a mixture of contempt and loathing. Still, portraying a bisexual man as noble and worthy of respect and sympathy was unheard of in films of the time.

Ackerman is a scumbag not because he wants détente with the Communists—Leffingwell wants that too, and he's a good guy. Rather, the problem with Ackerman is that he's too impressed with his own ideology. He launches into political rants at dinner parties, and has no sense of humor. He thinks world peace is more important than personal politeness. In short, he acts like he's on Twitter—even unto the doxxing of his political opponents.

You could see Van Ackerman as foreshadowing our own hyper-partisan times, in which compromise is elusive. He's a demagogue, playing, it’s suggested, to remorseless populist anti-war mobocracy (Preminger would have been opposed to Occupy, presumably.) Van Ackerman does what he does "for the good of the country" he tells his majority leader. To which Majority leader Bob Munson (Walter Pidgeon) replies, "Fortunately, our country always manages to survive patriots like you."

The way in which the Senate survives Van Ackerman is through collegiality. Cooley and Munson, minority and majority party leaders, both allow their party members to vote as individuals for the Leffingwell vote. Rather than a party test, the issues become a matter of conscience. Honorable men express their true opinions honorably, as individuals. That's the dream of democracy.

The dream, though, looks fuzzy around the edges. In the real world, Senators never vote their conscience. Even if they're not voting party line, they're politicians; they answer to a constituency. Here, Capra is actually more on point than Preminger: Mr. Smith Goes To Washington does show Jeff Smith concerned about popular opinion back home in his Western state. In contrast, the senators in Advise & Consent never talk at all, or think at all, about what their constituents want or don't want. The President is in ill health and dying, but no one is much concerned one way or another with how his death might affect his popularity, or what that might mean for voting senators. When the President does pass on, the first action of the Vice President is to defy the man's public dying wish—which seems like an awfully silly thing to do if you're a politician and care about reelection. And virtually all politicians care about reelection.

Advise & Consent presents American democracy as a pageant of individual triumph and venality; Sen. Brig wrestling with his conscience, Sen. Sebe admitting error, Sen. Van Ackerman's dastardly deeds. But the truth is that democracy, by its nature, is a collective action endeavor. People vote straight party tickets for the very reasonable reason that they know what the parties stand for. If your individual conscience puts you at odds with your party often enough—if you're a Republican and keep voting pro-choice for example—voters in most situations are going to feel like they can't trust you, and toss you out.  Individual consciences are fine, but politicians are supposed to be responsive to their constituents. Otherwise, you've got enlightened despotism, not democracy. That's one reason why Trump's implicit and explicit promises to listen to nobody when he's in office are not reassuring.

Parties were less ideologically sorted in 1962 than they are now. You could argue that that was a good thing… except that the main source of ideological heterogeneity was the schism between southern Democrats advocating Jim Crow and the northern half of the party that was in favor of less racism. The divide stalled efforts at racial justice for decades.

Blackmailing people is shitty, but collegiality in the name of apartheid isn't so great either. Preminger takes a strong stand in favor of senators treating each other with kindness, but waffles when it comes to making the case for ratcheting down the Cold War, presumably because taking a stand there would actually piss people off.

Which is understandable, but rather undermines the film's ethical pretensions. After all, politics is a moral endeavor not because it tests the consciences of individual statesmen, but because policy choices have a material effect on the lives of millions of people. That's a story that even talented filmmakers like Preminger seem unable, or unwilling, to tell.