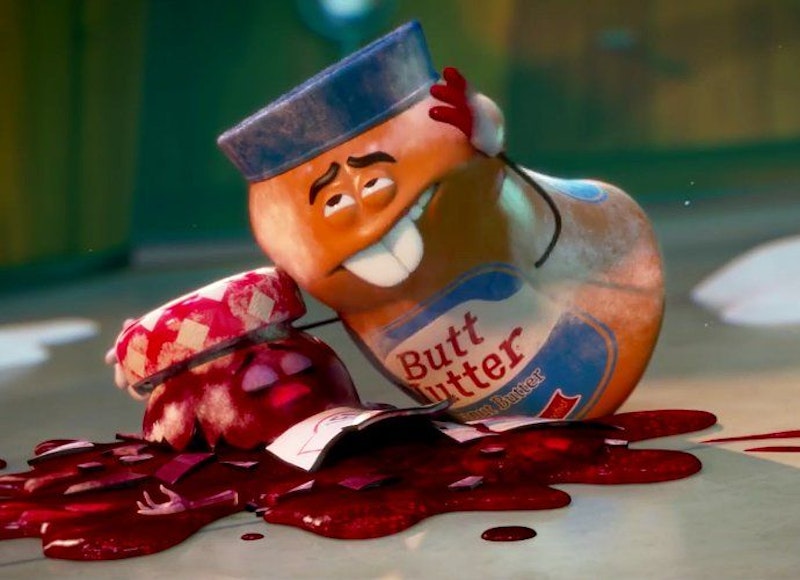 I first heard about Sausage Party two or three years ago, when Seth Rogen went on a comedy podcast and shared the genesis of the project: Rogen knows a lot of animators who work for Pixar and Pixar-like studios are sick fucks. These people, while creating respected, award-winning movies that are mostly meant for children, never get much of a chance to channel their sense of humor in their work. Hence Sausage Party—a cartoon movie in which food items curse, screw and commit various other acts not typically associated with multiplex cartoon characters.

The resulting film, now in theaters, is about what Rogen described: Directed by Shrek/Madagascar veteran Conrad Vernon (along with Greg Tiernan), Sausage Party is structured almost exactly like a Pixar film, in which the inanimate objects can talk and move without humans noticing, take turns rescuing each other, with friendship ultimately triumphing over all. The difference is, Sausage Party is R-rated, with plentiful sex, violence, cursing and a finale so perverse that it nearly defies description. And on top of all the raunch, Sausage Party positions itself as an elaborate, somewhat incongruous allegory about atheism and organized religion.

The film’s world is a grocery store, where all of the food items stay in their packages and dream of “the great beyond” (outside the store) where they’ll one day be taken by “the gods” (the store’s human customers); they’re all unaware that one day they’ll be cooked and eaten. Rogen, who co-wrote and co-produced the film, plays one of the titular sausages, while his girlfriend (Kristen Wiig) is a bun; you can imagine how that turns out. Most of the film is a trip around the grocery store, with a couple of detours outside; the voices are provided by Rogen’s usual company of buddies (Jonah Hill, James Franco, Michael Cera, Bill Hader, Danny McBride, Craig Robinson, etc.).

Is the film itself as clever as its premise? Only intermittently. When Sausage Party is funny, it’s very funny, the world-building is impressive and it lays out “rules” that make sense. The one involving bath salts, by the way, is especially impressive and has a fantastic payoff. But the movie only hits on maybe half of its jokes, and quite a few of them are telegraphed well in advance. About two-thirds of the film’s characterizations are based entirely on broad ethnic stereotypes—the bowl of grits is black, the curry sauce is Indian, you get the idea—which isn’t so much offensive as lazy.

Some of them work, however—there’s a sexy taco (voiced by Salma Hayek), a gay Twinkie and the complex relationship between an Arab lavash (David Krumholtz) and, you guessed it, a Jewish bagel (Edward Norton, doing a movie-length Woody Allen impression.) And I’m still laughing about the wad of gum that uses a wheelchair and imitates Stephen Hawking (voiced, like the Twinkie, by Scott Underwood.)

The other major element of Sausage Party that doesn’t work is the bad guy, who’s a douche—literally. Voiced by Nick Kroll, he’s a 10-years-out-of-date Jersey Shore caricature who wears out his welcome after 30 seconds but remains part of the movie until the end. Let’s just say The Enchantress from Suicide Squad is no longer the year’s least effective movie villain.

As for the religion allegory, it’s ambitious but not thought out: the conclusion seems to be that atheists are right, but should use a softer and more respectful tone when explaining things to non-believers.

Raunchy animation is certainly nothing new; South Park is about to enter its third decade, and anyone who ever attended Spike and Mike’s Sick and Twisted Festival of Animation back in the 1990s has seen animated stuff that makes the most transgressive elements of Sausage Party look like nothing. But one still gets the sense that bringing that attitude into the structure of Toy Story, with the backing of a major studio, is somewhat groundbreaking.

If you see Sausage Party, be prepared to laugh a lot and cringe at least at little. Just don’t bring your young kids to see it.