Midnight Sky isn't great, but does offer some compelling ideas about space, humanity and apocalypse. B- 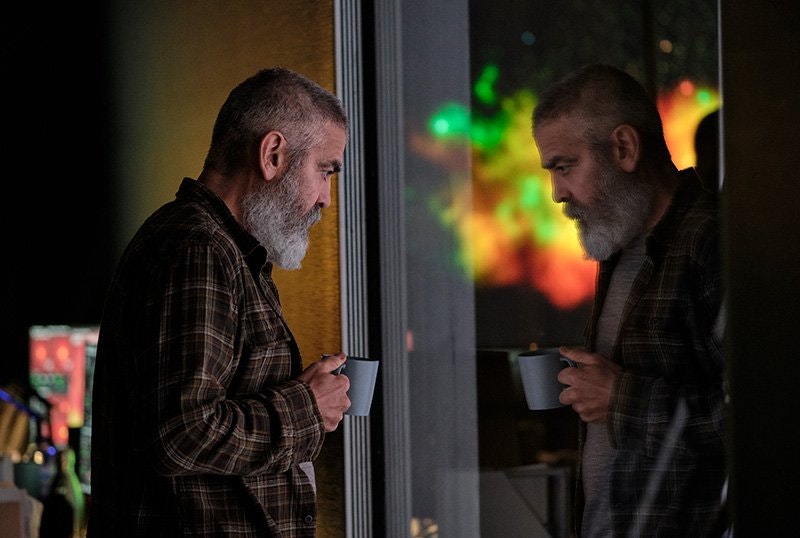 George Clooney's first film as director, 2002's Confessions of a Dangerous Mind, was an outstanding debut. His next, 2005's Good Night and Good Luck, was even better, and showed Clooney had serious potential as a filmmaker. But in the 15 years since, just about every movie Clooney has directed—Leatherheads, The Ides of March, The Monuments Men, and Suburbicon—has been worse than the last.

With Midnight Sky, which debuts on Netflix this week, Clooney halts the losing streak, with a film that isn't great, but does offer some compelling ideas about space, humanity and apocalypse.

Clooney usually doesn't appear on screen in movies he directs, and in fact, he just had a four-year hiatus from appearing on screen at all.  But he stars in The Midnight Sky as a scientist with the wonderful name of Augustine Lofthouse. He's based alone in the Arctic in the post-apocalyptic future, while slowly dying of cancer. He soon discovers he's not alone—there's also a mute girl who stowed away on the ship.

That's one half of the film; the other is a crew aboard a space shuttle (which includes Felicity Jones, David Oyelowo, Tiffany Boone, Demián Bichir and Kyle Chandler), which has been seeking out a new place for humanity to live. The two stories end up connected, in a way that shouldn't be too surprising.

Midnight Sky is based on Good Morning, Midnight, the 2016 novel by Lily Brooks-Dalton, and its the latest in a recent spate of films that’ve sought to marry space travel with weighty ideas, after Interstellar, Ad Astra, Sunshine, The Martian, and Claire Denis' underrated High Life. As for space movies with Clooney, it's a few ticks below Gravity, but much better than his remake of Solaris.

The most impressive thing in Midnight Sky is the CGI of the space station, which looks incredibly cool, and finds something creative to do with fictional spaceship architecture. The space station is full of actors that it's great to spend time with, even if their banter and plots aren't particularly different from what we're used to in the genre. While Clooney is excellent, his part of the plot is sort of boring. It's a slog in which Clooney and the girl have to walk to a different part of the Arctic to find a stronger antenna.

But even worse is a series of scenes in which we see a younger version of Clooney having a love affair, and Clooney is played by a younger actor (Ethan Peck), who speaks with a voice that's a combination of Peck's and Clooney's. This somehow has even more of an uncanny valley effect than if Clooney had used de-aging technology, especially  since we know what Clooney looked like when he was young, and it's not like that.

Middling as the film is, Clooney does, in Midnight Sky, end the downward spiral that’s his directing career, while also showing that he's got some life in him as a movie star, too.