Violence and Betrayal in The King

If nothing else, the movie shows how effective Shakespeare’s dialogue is. 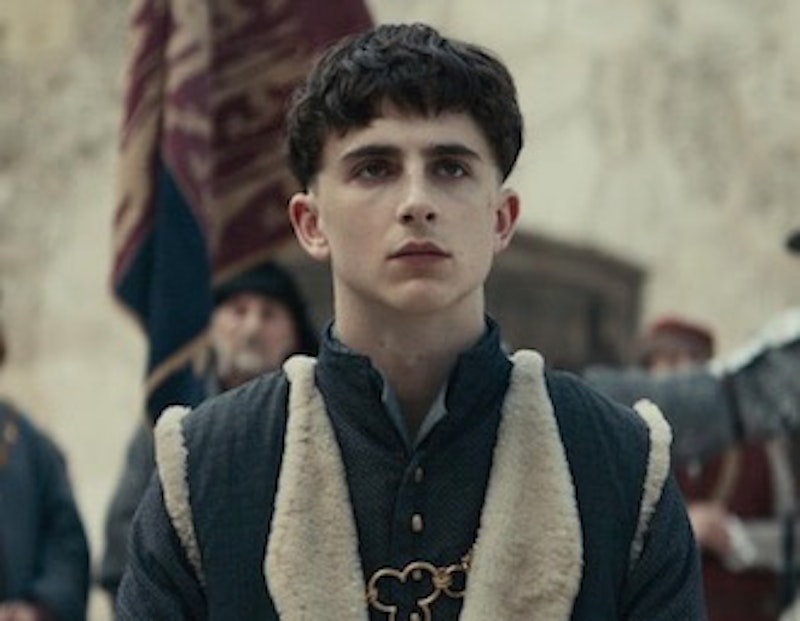 It’s a great story. In 15th century England, rebellions break out against an usurping king as his dissolute heir drinks and whores with a company of rogues. Then the young prince takes the field against the rebels and proves he’s not so dissolute after all. When the old king dies, the prince takes over, rejects his baseborn friends, and leads his country to a stunning against-all-odds triumph in the fields of France.

That’s the story of Prince Hal, later King Henry V. William Shakespeare’s Henry IV Part I, Henry IV Part II, and Henry V have now provided the inspiration for The King, a film from Netflix and director David Michôd, not a straight adaptation but a rewriting of the tale. Shakespeare’s dialogue’s thrown out—he doesn’t even get a writing credit—but some structural ideas are kept. Joel Edgerton gets credit for writing the film with Michôd, also playing a version of Shakespeare’s character Falstaff. Michôd and Edgerton have conceived a different kind of story about Prince Hal. Unfortunately, their film doesn’t really work.

Visually, the opening shot’s the most interesting in the movie: a long take travelling across a battlefield to focus on Hotspur (Tom Glynn-Carney), a young noble increasingly disenchanted with the rule of King Henry IV (Ben Mendelsohn). The rest of the film’s made up of competent but undistinguished compositions, predictable editing rhythms, and bland visual storytelling. Sets, props, and costumes look fine and sometimes excellent, though there’s an empty feel to some of the court scenes betraying budget limitations.

The actors do what they can, with Timothée Chalamet as Prince Hal giving his all and getting across a character arc left underwritten in the script. Edgerton’s Falstaff is watchable but a comparative nonentity, without personality or distinctiveness, a generic grizzled mentor figure. Robert Pattinson gleefully chews the scenery as the French Dauphin, and if that doesn’t quite fit into the tone of the film at least he looks like he’s having fun. I’ll also note that Nicholas Britell’s score is fine music that unfortunately doesn’t sit well over the film’s visuals, giving scenes already straining after emotional heft too much melancholy.

The main problem is the writing. Michôd and Edgerton don’t present a convincing case that their concept of Prince Hal is anywhere near as interesting dramatically as Shakespeare’s, and they don’t tell a coherent a story. Hal in The King is a teenager who’s disinherited by his father for being a wastrel, but after his younger brother dies in battle he ends up on the throne anyway. That’s at about the 35-minute mark, and already there are problems and loose ends. For example, after we get several scenes establishing Hal’s rivalry with his brother, the brother dies offscreen, and that’s the end of that.

A large part of The King is driven by Hal’s distaste for needless war. Leave aside the fact that this is an improbable attitude in a medieval king, almost as improbable as the princess who declares “all monarchy is illegitimate.” The point is that Hal feels this way as a reaction to his father, who uses war as an element of policy. So in an early scene we see Henry IV knowingly provoke Percy to rebellion. But while it defies belief to think that Henry does this for no reason, the movie can’t be bothered to explain what that reason was. Which means we don’t understand Henry’s plans. Nor do we come to understand much of him emotionally. Since we never really understand Henry IV, we don’t really understand exactly what Hal’s reacting against, what war and violence mean to Hal. And Hal’s character is undercut by the lack of clear contrast.

Is Falstaff meant to be a substitute father figure, as in Shakespeare? If so, we don’t get a sense of that. Shakespeare created an immortal craven fat man; here we get a slightly husky burned-out veteran who gives Hal military advice after he becomes king, and finally sacrifices himself at Agincourt. He’s a bland figure who exists in order to make a bland point about the blandly-imagined horrors of war.

Thematically, the movie’s got a lot to do with violence and betrayal. The violence is perfunctory, saying nothing interesting (and is oddly bloodless throughout). The betrayals are more interesting, if only because Hal’s decision not to betray Falstaff is a notable swerve from the movie’s source material. But an absence of character work undoes the significance.

When Hal’s cousin conspires with the French, we don’t care because he’s barely spoken a line up to that point. The discovery of a final betrayal by a minor character close to Hal is puzzling instead of devastating; we have only the vaguest idea why the character did what he did, his motivations never having been explored. On a basic plot level, the fact that we never see Henry reinstate Hal as his heir means that when the king dies there should be any number of factions scheming to get their candidate on the throne rather than accepting a prince without any real backing. Game of Thrones did this all much better, which is not something one should ever be thinking when watching the story of Henry V.

If nothing else, though, the movie shows how effective Shakespeare’s dialogue is. Shakespeare’s language doesn’t just establish character and move plot along with surprising economy, it also sets up stakes and brings out heightened emotional states. Lacking that, The King lacks power. The movie doesn’t build a distinctive world, and no character has a distinctive worldview or presents a sense that their politics are part of a social whole. There’s just nothing to them.

The King has a few interesting ideas, and a few well-done elements. But ultimately this is a reboot of a story that was in no need of a reboot. When Falstaff goes to his death at Agincourt, he ruminates on the possibility of dying in his cups back in London and concludes, “I think this makes for a much better story.” That makes one of him. A wise man—not Shakespeare, but about as close as American TV has produced—once wrote, “You come at the king, you best not miss.” This is what happens when you miss.