The Report is a serviceable but politically sound drama about the CIA’s illegal torture program from 2003 to 2009. B- 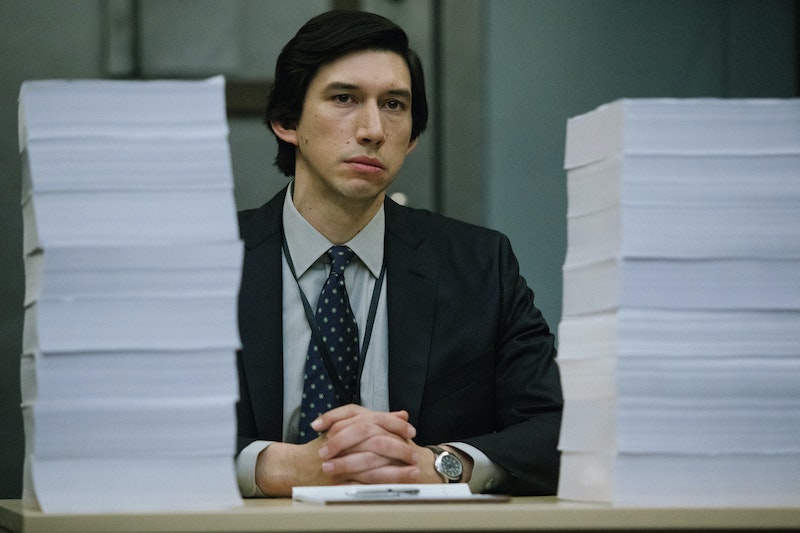 Along with gaudy rock operas, space operas, and superhero spectacles, we’ll be deluged by movies “ripped from the headlines” whether they end up on Netflix or in theaters worldwide. Ever since Spotlight won the Best Picture Oscar in 2016, the same year The Big Short was expected to win, there’s been a surge of these films about relatively recent real world events. I love it: “Politics is show business for ugly people” is a cliché for a reason. Depending on the perspective of the script, these films can be entertaining, at least more entertaining than the news itself, which has never resembled ESPN or WWE more. Now these movies come non-stop: Just last month was Steven Soderbergh’s The Laundromat, last Christmas was Vice, this Christmas it’s Bombshell, a couple of months ago was Official Secrets, and then there’s the stream of documentaries that will continue throughout the Trump presidency.

Scott Z. Burns’ The Report isn’t propaganda, and it’s not infected by myopic Trump hysteria. It’s a serviceable run-through of a story that most Americans tuned out for a number of reasons: a weary media, thousands of mostly redacted pages, and unbelievably horrific war crimes committed by Americans that not only violated the Geneva Convention but produced no useful intel after six years. Dan Jones is not infamous or in hiding like Edward Snowden or Julian Assange—he was never a whistleblower, and toward the end of The Report his avatar Adam Driver is given a chance by some wannabe Deep Throat to leak the full, un-redacted report on CIA “enhanced interrogation techniques.” He refuses: “If it’s going to come out, it’s going to come out the right way.” And indeed it did, albeit in summary form and still heavily redacted, in December 2014. I’ve had a copy sitting on my shelf since then, but have never gone beyond skimming because it’s an abyss.

“Society is based on a shared murder,” croaks Jean-Luc Godard in this year’s The Image Book, the most comprehensive and concise examination and diagnosis of the failures of the 20th century and the hopelessness heading into the 21st. “It’s like a bad dream written in a stormy night.” This says more than any third act speech or moralizing Oscar bait ever will. But The Report isn’t bad, isn’t bait, and even includes Zero Dark Thirty in its critique. Consumed by the investigation for years, Jones looks up one day to see a commercial for Kathryn Bigelow’s film, a reprehensible piece of propaganda on the order of Triumph of the Will and The Birth of a Nation, and by far the worst film I’ve ever seen. Jones knew in late-2012 that what the movie was saying was false and he couldn’t do anything about it. Bigelow put herself in league with Riefenstahl by making a movie that endorsed our government’s lies about torture eventually leading to the killing of Osama bin Laden.

The Report deserves credit not for exemplary filmmaking but honest portrayal of American war crimes and an attempted cover-up (who knows how much wasn’t released). Made for Netflix, it’s a politically sound, albeit dry, dramatization of the CIA’s torture program, and the report itself is equally boring and revolting. The movie is the same: Adam Driver is reliably good, as is Annette Bening as Dianne Feinstein (though I kept thinking of Elizabeth Warren watching her—that performance is inevitable). Many great character actors and people pulled from television that keep it brisk—among them: Jon Hamm, Corey Stoll, Tim Blake Nelson (the compromised Vice President in Angel Has Fallen), Maura Tierney, Michael C. Hall and Jennifer Morrison. It’s too long at two hours, and the sepia-toned flashbacks to CIA black sites with brutal dramatizations of these atrocities we sponsored: water-boarding, sleep deprivation, “walling” (take a wild guess), mock burials with insects. A suggestion is almost always better than this, or more dense sequences that depict or evoke the torture without having to, ironically, sit through what at times felt like a rehash of that violent object Zero Dark Thirty.

But Burns’ direction and script are otherwise taut and most importantly do justice to a very delicate subject that’s been botched and abominated too many times now. He’s written some really good American social satires for Soderbergh: Side Effects, The Informant!, Contagion, and this year’s The Laundromat, a mixed bag and another Netflix movie. I’m glad The Report is going out to two million Netflix subscribers and a handful of theaters. This isn’t a great movie, but if you have the chance, and you’re interested or want to know more about American war crimes in the 21st century, see it in a theater. Netflix, at the very least, doesn’t skimp—they put money into their movies.