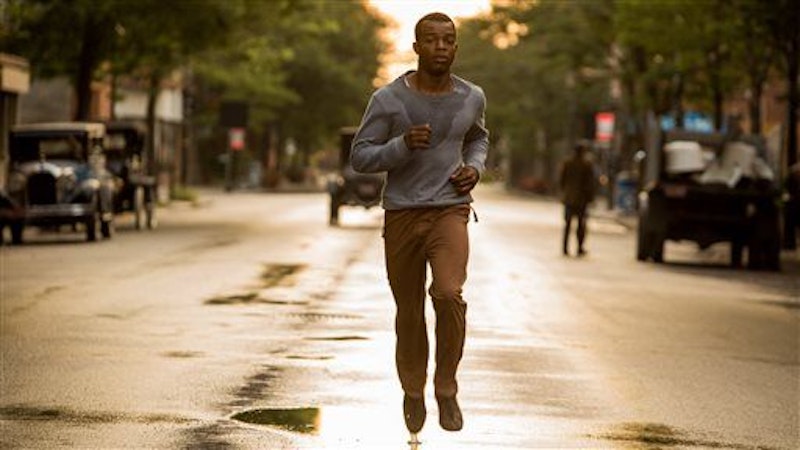 The story of Jesse Owens, a hero in the history of American sports, finally comes to the big screen 80 years after the fact with Race. The film is competent and true, purely in the tradition of the inspirational, fact-based Disney sports movie—even though it’s a non-Disney production—but it breaks little ground and won't go down as any kind of sports cinema classic.

There’s a long tradition of those Disney movies—Remember the Titans, Glory Road, McFarland USA—placing sports against the backdrop of racism and race relations. Race, as its double-edged title might indicate, depicts the story behind perhaps the greatest sports-over-racism moment of all—when African-American Jesse Owens not only won four gold medals in the 1936 Berlin Olympics, but did so as Adolf Hitler watched.

Race, in a 134-minute running time, juggles several different aspects of the story. There’s Owens’ youth and his time on the Ohio State track and field team under coach Larry Snyder (Jason Sudeikis.) There’re the machinations among the various Olympic officials over whether the U.S. should have boycotted the Nazi-presented Games, with William Hurt arguing for a boycott and Jeremy Irons (as Avery Brundage) arguing against.

And we also see into the Nazi planning for the Games. The guy playing Hitler doesn’t get a speaking role, but there are meaty parts for Goebbels (Barnaby Metschurat) and Leni Riefenstahl (Clarice van Houten, from Game of Thrones.)

The film, directed by Stephen Hopkins, is fine. It handles the sports sequences reasonably well, and its staging of the 1936 Games is a considerable improvement over what Angelina Jolie did with the same Olympics in Unbroken. It's also not shy about calling out misdeeds by the Olympic movement, even depicting Brundage—who was running the IOC into the 70s—as something like a Nazi collaborator.

Stephan James, the 22-year-old Canadian actor best known for playing John Lewis in Selma, does a passable job as Owens; it’s nice to know that if you’re going to cast a relatively little-known actor to play a giant of 20th century African-American life, there are options besides Chadwick Boseman.

On the other hand, there’s not a lot of ambition here. Little ground is broken and there aren’t any towering achievements. Like 2013’s Jackie Robinson biopic 42, another film that took many more decades to reach screens than it should’ve, it’s a movie that could’ve had a lot more depth. It doesn’t approach Owens’ story with anything like the ambition of, say, Michael Mann’s Ali.

The Ohio State scenes—featuring Sudeikis, surprisingly effective in a dramatic part—introduce a fascinating dynamic: OSU’s track team was integrated in the 30s, but its football team was not. But it doesn’t say why, or get into how it got that way.

There’s also a long section dealing with the dilemma of whether American athletes should’ve boycotted the 1936 games, with many of the same arguments surfacing on both sides that did eight decades later when some pushed for gay athletes and dignitaries to boycott the Vladimir Putin-presented Sochi Games in 2014. But Hurt, in an impressive turn, all but disappears after the first act.

Then there’s Leni Riefenstahl, a towering figure in the history of world cinema who, unfortunately, spent a large chunk of her career as a propagandist for the Third Reich. A college film professor of mine used to stay that while Riefenstahl is the greatest woman filmmaker in history, “the feminists kind of have a problem with her because she’s a Nazi.”

Van Houten is perfectly cast as Riefenstahl who, incredibly, died at the age of 101 in 2003. Whenever she was on screen, I was thinking, “I want to see a whole movie about this person.” Jesse Owens’ story is compelling, and Race does it a certain amount of justice while, according to all I’ve read, staying reasonably faithful to the facts of the story.