The Neon Demon is stylish and flawed. 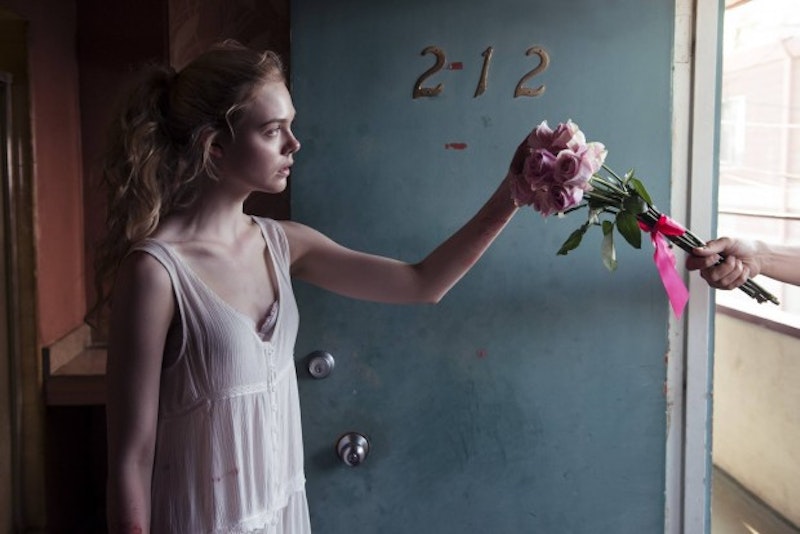 Nicolas Winding Refn’s The Neon Demon moves along at a slow boil before going totally off the rails in the third act. There’s no doubting its audacity, and there’s some really good stuff here from a stylistic standpoint, but it ultimately collapses under the weight of its own ridiculousness.

The Neon Demon is a tale of jealousy and bitterness set in L.A.’s fashion world, and has more than a little bit in common, thematically and stylistically, with Darren Aronofsky’s Black Swan. There are continuing motifs involving blood, large panthers, stylized violence and skinny models with visible ribcages. I could see Brian De Palma watching The Neon Demon and thinking the director should’ve taken it down a notch.

Elle Fanning stars as Jesse, the girl from the Midwest who just got off the bus in LA, with notions of a modeling career. Living in a dingy motel (managed by, of all people, Keanu Reeves), the 16-year-old Jesse is soon pulled into the fringes of the L.A. fashion world, introduced to shady photographers and fashion designers of the high-brow and low-brow variety. Also in her orbit are a group of catty models (Bella Heathcote, Abbey Lee), an aspiring photographer she’s kept in the friend zone (Karl Glusman) and a makeup artist (Jena Malone) who offers comfort and counsel but may not be all she appears to be.

We see photo shoots, odd nightclub performances, and toxic backstage confrontations. It’s all shot in a hyper-stylized way, with a lot of particular attention to detail in the product design. The Neon Demon does look fantastic.

As the film goes on, you may be wondering exactly what direction it’s going in. Will this evolve into a story of showbiz triumph? Into an earnest warning about the ultimate shallowness of the fashion world? Into something supernatural? Where it ultimately goes, though, is just plain weird. It’ll shock everyone who sees it, delight some, and possibly disgust most. At the screening I attended there were the most walkouts of any movie I’ve been to in the last several years.

Fanning, in one of her first grownup roles, holds her own. Malone, though, is the true highlight. Also a former child star—she played the young Jodie Foster in Contact—Malone resurfaced a few years ago and has had memorable parts in such movies as Inherent Vice. Here, she gives a strong, multi-faceted performance—and there’s one scene in which she’s asked to do something that I hate to imagine any actress ever having to do. Meanwhile, there’s Reeves, cast as a lecherous innkeeper, clearly having a good time off in his own little movie.

When Refn, the Danish director of Bronson and Valhalla Rising, last made a film in Los Angeles it was 2011’s Drive, one of the best American films of the decade. After that he made Only God Forgives, also with Ryan Gosling, and it had all the style and violence, but none of the magic that Drive did. The Neon Demon, I’m afraid, follows the same pattern—it looks great, and establishes its world quite well, but its story fails to hang together. The Neon Demon is much more entertaining if you imagine it as the origin story for Melania Trump.