Up the Intersectional Punks

Moxie starts as a promising film that tries to fuse 1992 with 2021, with limited success. B 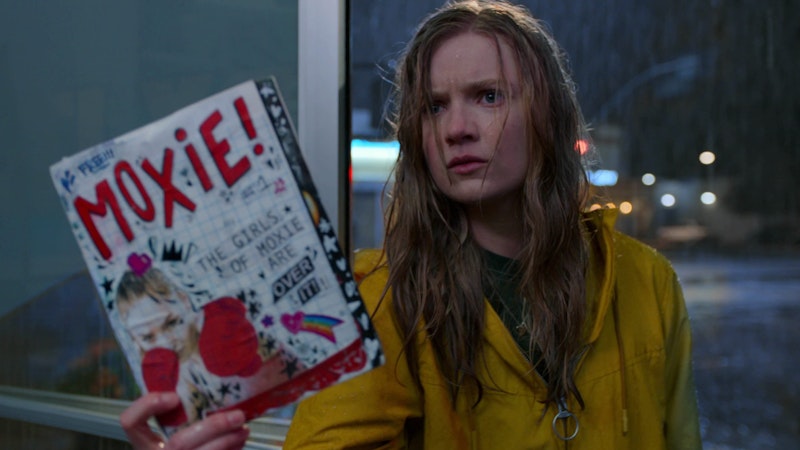 There's a long and annoying tradition of fortysomething directors of teen movies giving their characters an unexplained and anachronistic love of the music the director liked when they were teenagers. This is why Wayne and Garth loved Led Zeppelin instead of Nirvana.

Moxie, the new Netflix movie directed by Amy Poehler and adapted from Jennifer Mathieu's young adult novel, takes that trope further. Not only does its present-day heroine develop an appreciation for the music of Bikini Kill and Sleater-Kinney, but she and friends also embrace the political and cultural worldview of the Riot Grrrl movement, circa 1992. That includes everything from a zine (the "Moxie!" of the title) to a band that plays Bikini Kill covers to a feminist awakening.

It's an intriguing premise, brought to life by a talented cast, and while there have been numerous comparisons to Mean Girls—since Poehler played a mom in that movie, and her longtime colleague Tina Fey wrote it—the vibe, style and goals of Moxie are completely different. The movie also has fun with music, tossing in a punk cover of "Suddenly Seymour" from Little Shop of Horrors, which takes the recent cinematic renaissance of the work of Alan Menken and Howard Ashman in an unexpected direction.

However, it doesn’t all add up.

The administration, in the person of principal (Marcia Gay Harden) turns a blind eye. They also do stuff, straight out of viral news stories, like forcing a buxom, tank top-clad student to cover up. So Vivian and her friends, inspired by the Poehler character's youthful experiences, strike back against the school's patriarchy, with Vivian anonymously producing the titular throwback zine.

The movie’s set in Oregon, where the Riot Grrrl movement got its start, and not in an especially conservative part of the country. Knowing what I do about public high schools these days, they're much more likely to be overzealous when it comes to dealing with bullying and harassment, as opposed to ignoring them.

And while it's not like zines are completely dead—some colleagues of mine in Philadelphia make a very good one about film, called Moviejawn—you'd think such underground, clandestine high school efforts would be more online, rather than using a method that requires paper and copy machines.

The other issue is that it's not like high school girls these days haven't heard of feminism. In fact, I'd bet that post-#MeToo, high school students are considerably more attuned to feminism than those of 10 or 20 years ago. And it's a very different feminism than the Riot Grrrl kind—more intersectional, for example. There are some hints at that, especially at the end, but not enough to justify that whole process. Moxie is a superior film to Poehler’s last effort for Netflix, the instantly forgettable Wine Country. It's a promising film that tries to fuse 1992 with 2021, with limited success.