Josef von Sternberg's direction of Marlene Dietrich in Morocco (1930) is a case study in "making a star." 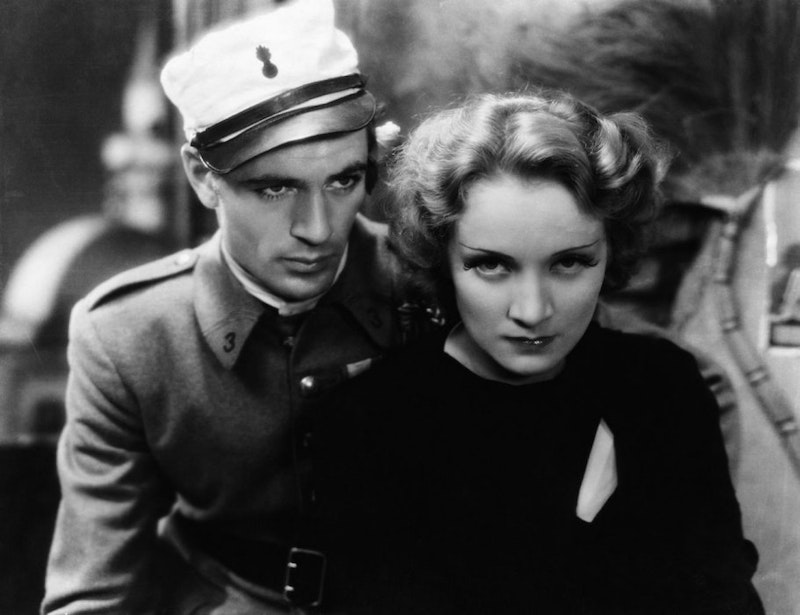 Throughout her life, Marlene Dietrich repeatedly said that Josef von Sternberg created her. Perhaps this was an exaggeration since a human being would have to be willing to submit to be created, and not many would associate submission with Dietrich. She embodied independence, as well as that uniquely masculine thrust. At the same, her beauty was undeniably feminine, and it was precisely this tension and dichotomy that most of us avoid that made Dietrich powerful.

Whatever the state of their relationship, there’s merit to the fact that von Sternberg’s film direction sculpted and painted Dietrich. The continuity of this artistic endeavor, this control and possession of the artist’s subject and object, is obvious with the second film of the Dietrich/von Sternberg collaboration, Morocco (1930). This was the first official Hollywood film that the pair made together, and the first introduction of Dietrich to an American audience (The Blue Angel, made earlier was screened in America after Morocco).

Just as The Blue Angel opens with a woman struggling to keep disorderly chickens in the coop, Morocco’s first scene is of a man struggling to move a donkey from the path of soldiers—legionnaires returning from the front lines. Stubbornness and rebellion are themes of the film, and they’re embodied by three main characters: Amy Jolly (Dietrich), an actress who much like Lola Lola in The Blue Angel, performs in a club; Tom Brown (Gary Cooper), a legionnaire who develops a romantic relationship with Amy Jolly; and Monsieur La Bessiere (Adolphe Menjou), a wealthy man who wants to marry Amy Jolly.

It’d be too easy to call this a love triangle. As much as all three characters are attempting to connect to each other in their own way, they remain separated by thousands of metaphysical miles, often holding on to illusions of one another. All three are basing their relationships on a game of desire, and it’d be foolish to expect any stability in the mad eroticism that permeates this film.

At first, Amy Jolly appears to be an independent woman. We encounter her on a boat bound for Morocco. Dietrich has hints of Greta Garbo in her face and demeanor, as if von Sternberg is playing a trick on the unsuspecting audience. But as the film unfolds, as veils upon veils of the cinematic organza are lifted, Dietrich’s unwavering sculpted face is revealed wholly as her own.

Monsieur La Bessiere is also on a ship and attempts to help Amy with her suitcase. He offers her his card in hope she’ll perhaps contact him after they arrive in Morocco. Amy thanks him politely and then proceeds to tear the card in small pieces. It’s fascinating that Dietrich flicks the pieces of paper rather than blows them into the air, which would’ve given the scene a more romantic atmosphere. It’s equally fascinating that La Bessiere is a witness to this, and yet he feels intrigued by the rejection.

They meet again in a club where Amy performs. What ensues is one of the most powerful, unforgettable, and erotic moments in cinema. The audience at the club is waiting to be surprised by the newest addition to the club. Dietrich enters the stage wearing a man’s tuxedo and a top hat. This alone is a great cause for the various elements of surprise that unfold during this performance. Dietrich moves her body with the certainty of a man (even if those masculine certainties may be projected illusions) but seeing the audience with a manipulation only a woman is capable of. Dietrich has no gender in this case. Even the fluidity between the masculine and feminine aspects of a human being is rendered invisible. The lines that von Sternberg paints disappear as soon the brush touches the canvas. But the trace in the mind’s eye remains. The glimpse and the moment of the embodied eroticism of Dietrich permanently burns itself into the imagination so much that it begins to create illusions of its own.

The entire notion of sexuality is reversed. Dietrich takes the flower from a woman in the audience, proceeds to kiss her, and then throws the flower into the club pit to one legionnaire, Tom Brown. Gary Cooper is his usual attractive self: at once seductive and at the same time, in love with himself. Unlike most of the audience members, Cooper’s Tom Brown is intrigued by Amy Jolly’s interpretation of sexuality, and is willing to play the feminine role. But underneath all of this play, we constantly wonder, who has the real power?

La Bessiere is wealthy and carries a lot of power, and continues to pursue Amy. She relents but only after Tom Brown changes his mind about deserting the Legion and fleeing with Amy. Suddenly, the theatrical power of a woman in a tuxedo vanishes. It’s Tom Brown who ends up manipulating Amy, even after she accepts La Bessiere’s marriage proposal. She has seemingly tamed herself into submission to La Bessiere (Menjou strangely resembles von Sternberg in the film) but the desire can’t be bottled. As the end comes, Amy engages in yet another absurdity. The legionnaires are leaving Morocco and Amy notices there are a few local women following behind, as they always do. She absentmindedly bids goodbye to La Bessiere, and follows Tom Brown and other legionnaires into the desert, leaving her shoes behind. Brown’s completely unaware of this, and this adds more disturbance into the soul of Amy Jolly. Is this La Bessiere’s/von Sternberg’s revenge? Is Amy Jolly/Dietrich destined to become a prisoner of her own desire? Is Dietrich just a projected celluloid illusion that not even von Sternberg truly knew? Is the artist ever the owner of his own objet d’art or does he have to let go of his creation to be molded and sculpted repeatedly by someone else?

Morocco is a hypnotic film. The more you look at it, the more you’re seduced by the images. Von Sternberg creates one imposition after another, as if his own obsession and possession of Dietrich is bursting through the screen. All three characters are fools in their own way but it’s only Amy Jolly who fully gives in to madness at the end. This is a fight of a pure Dionysian desire, which is unsustainable. The existence of this particular eros entirely depends on its renewal, thus engaging in a repetition of the next erotic search. The subject and the object are caught in a psychological desire addicted to the climax, or “little death” as Georges Bataille calls it. The drive to completely annihilate the self is so unbearable that the subject’s mind has no choice but to exit the Apollonian fortitude and enter Dionysian illusory freedom. The subject chooses the metaphysical veil and the mask, and rejects the face.