Jasper Mall sports striking compositions but leans too didactic and sentimental. B 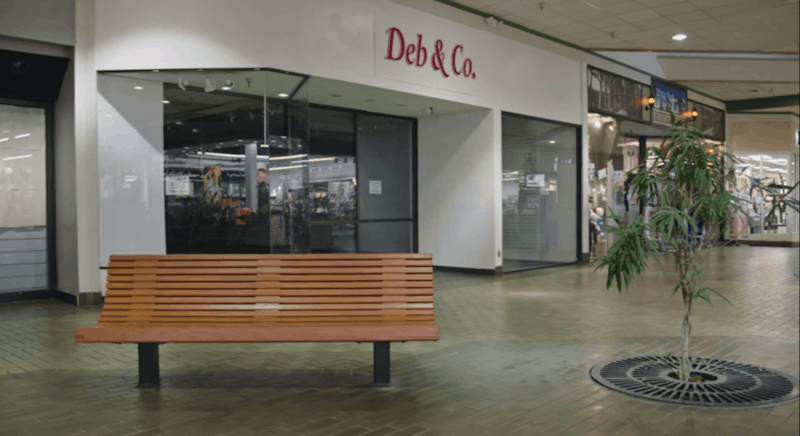 Jasper Mall was described to me as a collision of Frederick Wiseman, Errol Morris, and Netflix’s Tiger King. At 85 minutes, this is an easy sell, even if it’s high risk/high reward. The heavy-ham-handed attitude of most contemporary documentaries is mostly absent here. It’s true that Wiseman’s formalism immediately comes to mind when the filmmakers shoot the mall in long shots and string a series, either going in or out to show empty parking lots, empty hallways, empty stores, entire empty buildings. K-Mart and J.C. Penney took up, collectively, around 140,500 square feet in Jasper Mall. In one sequence, the janitor (Mike) leads us into what used to be 80,000 square feet of K-Mart. With only a flashlight, he wanders through pillars and dust, reaching a customer’s service stand, picking up a phone with mild interest.

What’s left at Jasper Mall? Subway, Bed Bath and Beyond, Belk. Bradford Thomason and Brett Whitcomb show “a year in the life of a dying mall and its patrons” (Whitcomb also shot the film, and Thomason edited it). There’s Robin’s Nest, a local flower shop, plus a few more generic food court spots. But it’s barren. Four older men play dominos every Sunday, and the filmmakers spend time with one of them, a guy on oxygen who’s “seen death three times.” He gets a call from his wife, and discussing a doctor’s visit, he says, “I’m in my 80s, I know there’s gonna be a final.” He laughs. “But that first time I died—and I actually was pronounced dead that time—I saw what Heaven was like. And I’m looking forward to it.” A beat before we cut. There’s nothing that can be added to the exchange we just saw that wouldn’t tamper or tarnish it.

The way Whitcomb and Thomason handle the janitor giving a kid a job interview is another example in not stressing “the point.” The kid is eager and has his head on straight, familiar with the realities of the job and ready to work. They get to the paperwork, and the janitor tells him, “So this job starts at $8 an hour.” Cut to the next scene. A perfect way to underline one of the most obscene inequities of modern American life, directly responsible for the downfall of retail shopping, without putting too fine a point on it. This is the most important thing you can do in documentary work: “make your point” with unadulterated reality. There’s editorializing; even if you cut in camera and show eight hours of the mall, you’re still choosing where to point the camera.

Jasper, Alabama is, in the words of many of the people who appear in this movie, a “small, comfortable town.” Like anywhere else, perversion abounds: a young male employee describes the people who work with him at the mall as “very nice, kind, easy to get along with,” he says that early in the morning, “you get a lot of perverted old guys.” He talks about one man who propositioned him so pathetically that the kid misunderstood until the guy had apologized and left in a hurry. This is another good nugget, and again is emphasized by the silence of the static wide shots that come between scenes.

These are often beautiful compositions, depicting dust and disuse, but this, the most important and compelling element of the movie, these formalist long shots, are handled fine: we see the space for ourselves, and although there’s editorializing inherent in montage, there are no dramatic match cuts showing how great the food court used to be, or how K-Mart used to be a madhouse.

Two female employees of the mall talk outside after work one night about perspective, big cities, getting lost in the “fish bowl” of New York, getting married, having kids, “getting a job and making a lot of money,” settling down. One of the women pines for “something bigger,” trying to impress upon her friend that, “this place leaves a bug in you.” She doesn’t pick up, or doesn’t want to, and makes a joke and the subject is changed.

It’s the most strained and clichéd moment in an otherwise understated documentary that, nevertheless, can’t help itself from becoming schmaltzy towards the end. The janitor is near tears as he describes Jasper Mall’s grand opening in 1982—“you couldn’t even walk in here, there were so many people”—to the slow, gray death it’s facing now. But Jasper Mall is evocative enough: many of the compositions are striking and say more about this mall, the mall as a phenomenon in America, the decline in capital production in the last 45 years, and the Midwest than any comment or voiceover.

There’s none of the latter, but the filmmakers do spend too much time talking with the janitor, Robin from Robin’s Nest, and various regulars young and old. It’s a nice ensemble, and their presence and interaction in the space of Jasper Mall, without commentary, would be enormously fascinating. As is, Jasper Mall is a fine document of one mall in Alabama, but, like too many new movies I’ve seen recently, becomes too didactic for its own good as it goes on. There’re posed photos of an interracial couple, who still have to put up with bullshit in Alabama in 2019, there’re tearful conversations on the phone with the janitor and with Robin, both ready to close down their respective shops.

Robin’s going to retire, “maybe travel,” while the janitor’s “probably going to go work for another mall. The owner of this mall, he owns about 30 malls.” He reminisces once again about how crowded the mall was in the 1980s, and after vivid purple clouds break the dread of the desiccated spaces in the mall, the credits roll along with pictures of the mall in its heyday. After the credits are finished, we see one more aerial photograph of Jasper Mall, its parking lot packed and its space full—of things to buy, people to see, “girls to bird-dog,” junk food to eat, muzak to ignore, and shiny objects still in service and still maintained by a modern master, not yet abandoned to the ghosts of factory past.