The Cobweb (1955) is a dark departure for the brilliant director of musicals and melodramas, and not entirely successful. 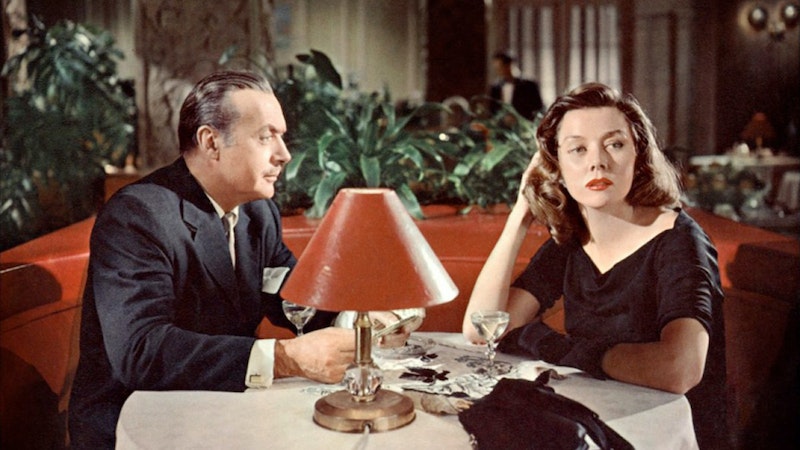 Vincente Minnelli’s been called (by critic Andrew Sarris) a director “more interested in beauty than art.” He’s considered by many to have transfigured the melodrama and the musical by making them gothic, expressionistic, even magical. But when I watch Minnelli’s 1955 film The Cobweb, included by the Criterion Channel in its “Frame of Mind” collection of films about psychiatry, I see nothing of the kind. The characters may deal with extreme mental states, but The Cobweb doesn’t rise beyond a mannered take on the prosaic matter of the everyday world.

Scripted by John Paxton from a novel by William Gibson (the playwright of The Miracle Worker, not the author of Neuromancer), the movie’s set in a psychiatric institution whose new head, Stewart McIver (Richard Widmark), devotes so much time to the place that his wife Karen (Gloria Grahame) feels neglected. McIver encourages the patients to have a voice in shaping their home, and they’ve formed a committee with the assistance of Doctor Meg Rinehart (Lauren Bacall), a beautiful widow. The most pressing issue: finding new drapes for the library, which McIver promises will be designed by one of the inmates, young artist Stevie Holte (John Kerr). But stern administrator Victoria Inch has already ordered cheap, hideous drapes, and Karen McIver’s gone over her head to the chairman of the clinic’s board to get a set she prefers.

Miscommunications and resentments pile up, all triggered by the issue of the drapes. Stewart McIver’s drawn to Rinehart, as Karen becomes the focus of lecherous Doctor Devenal (Charles Boyer), who’s disintegrating because of drink. Eventually Stevie believes he’s been betrayed and flees the institution, running to his apparent death. And yet, it all ends happily, not least due to a Christ-like resurrection of the mentally tormented artist.

Best known for his musicals, from the late-1950s critics have praised Minnelli for his craft and ability to creative a powerful alternative world on film. He’s concerned with décor and design, with visual texture, so a story revolving around something like a set of drapes fits his themes. This is also a story about a frustrated artist trying to shape his environment, threatened by the banality of the world: we’re meant to hope Stevie gets a venue for his art, and the psychiatrists at the clinic are sympathetic to the degree that they support Stevie.

The soap-opera plotting becomes tedious. It’s clever to have the issue of the drapes snowball the way it does, but there’s too much non-drape-related business with McIver and Rinehart, and Devenal’s alcoholism. The conflict over the drapes touches on these things, but doesn’t shape them.

As a melodrama, the characters aren’t particularly believable as credible adult human beings, and the film’s settings never acquire any consistent sheen of meaning or heightened power. So the story falls into a middle ground between reality and romance. There are some fine images here and there—for example, an exterior shot of the clinic as Karen McIver tears down the old drapes, which balances colors beautifully. Such moments are too few, but throughout the film the compositions are consistently strong, with long takes and precise camera movements situating characters in exactly the right spots of the screen. And yet the overall palette is brassy, often undermined by a dull orange tone.

It may not be a coincidence that the desire for the beautiful in opposition to the banal is part of the point of the film, as Stevie the artist has his obsession opposed by bureaucrats. The film doesn’t make him the main character, but rather McIver, the man struggling to support him, and there’s a logic to that: Stevie’s supported by the community of inmates, while McIver’s got to struggle with the real power structure, the administrators and trustees of the clinic. The problem is that he’s also torn between his wife and his work, and attracted to Rinehart, and those conflicts aren’t especially interesting. They feel like distractions.

As a psychologist, McIver doesn’t have much to say. He gives us the meaning of the title in a monologue near the end, observing that the relationships of the community of the clinic makes a cobweb, and then concludes, “If an analyst is to be of any real help to the people he cares for, it must come out of how he lives.” So much for his theoretical approach to his work; the film’s not interested in psychological theory beyond some very superficial gestures to Freud in McIver’s relationship to Stevie (and, even more subdued, Stevie’s to Karen). We’re merely told early on that the clinic’s dedicated to “environmental therapy,” in which the patients construct their own therapeutic surroundings. Which again fits with Minnelli’s concern with the construction of a visual setting.

The patients of the clinic are all high-functioning, able to construct and maintain a society, and the film implicitly validates them by focusing instead on the staff, who have more emotional turmoil in their personal lives. Unlike many earlier film representations of psychiatrists, the doctors here are fallible; they work at cross-purposes, make mistakes, and often have emotional issues of their own. There’s irony that the doctors are more troubled than the patients, then, and the film knows it: Karen tells Stevie early in the film that the difference between staff and patients is that the patients get better.

Earlier in that scene, Karen asks Stevie, “Why do flowers have to be for anything? Isn’t it enough that they have color and form and that they make you feel good?” It’s easy to apply that question to visual art, like Stevie’s, or to films like Minnelli’s. But while the form of The Cobweb is very strong in its camera placement and editing, I’m not convinced by the color. Narratively and visually, the movie’s not quite real but not quite elevated into a meaningful vision; it’s crafted and mannered but lacking fire. In my opinion. And what’s that matter? At one point Stevie tells a patient with a phobia of the outside world that if she goes to see a movie with him and she has a screaming fit not to worry: “They’d think you were a critic, that’s all.” Say what you will about the film, it doesn’t lack self-awareness.