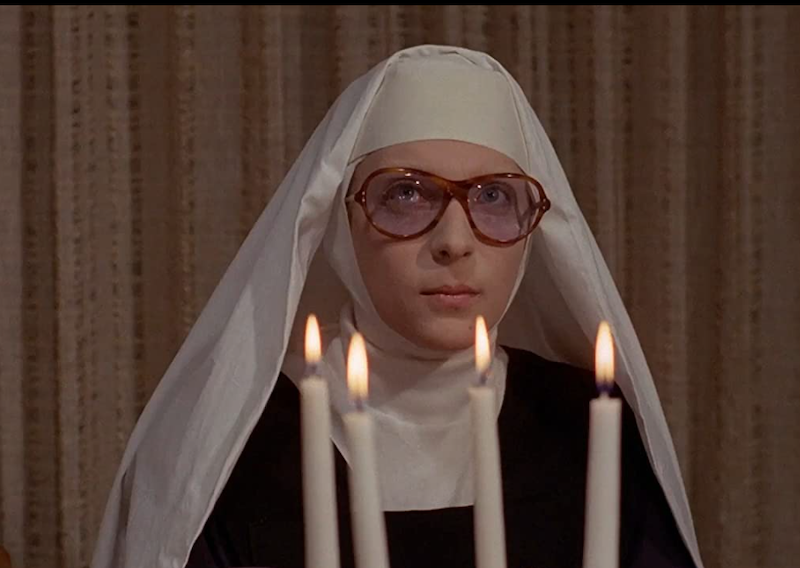 The slasher movie People Toys (aka The Devil Times Five) is an obnoxious relic of 1970s excess. The 1974 film finds tragic pop idol/child star Leif Garrett leading a gang of escaped mental patients into a murderous odyssey through the California mountains. Garrett and most of his blood-drunk conspirators are all children who murder for fun and use the dead bodies of their victims as play toys. The gory action unfolds mainly at a swinging ski lodge in Big Bear Lake, CA where a cast of TV vets and obscure character actors indulge in seedy misbehavior and softcore sex before being tortured and wiped out by Leif and his friends. People Toys is a curious but un-essential blurt of misanthropy that sloppily tries to cash in on every prevalent 70s horror/exploito trend the filmmakers could think of. Nonetheless, fans of early slashers and 70s cheese will notice that the film contains a few bold twists on genre fare. Its most original touch is the cast’s only teenage character, Sister Hannah.

An actress credited as “Gail Smale” plays the role of Sister Hannah, a mentally-unbalanced young woman who dresses like a nun. Her cold eyes express little emotion as the small children mutilate and torture every adult that surrounds them. Sister Hannah is usually standing alone in a corner, off to the side, or trailing behind the others. She observes each atrocity with the concentration of a quality control inspector. Peering out from flowing robes her face stays ghostly. Her purple/orange tinted sunglasses provide a dynamic contrast for the deathly complexion. Hannah gets a lot of screen time, but few lines. The filmmakers left this character intentionally unfinished thus making her the scariest and most mysterious member of People Toys’ outrageous circle of murderers and victims.

There are a number of powerful implications that can be connected to Sister Hannah. Her role as a curator of cruelty and violence could make her a neutral evil goddess-figure. Her hypnotic gaze implies a sensory overload, a euphoric satisfaction in knowing that the children have a faithful commitment to amorality. She does everything but encourage responsible behavior. She functions as a malevolent variation on Marvel Comics’ cosmic overseer Uatu aka The Watcher. Her reluctance to prevent horrific murder, her stark inaction, and calculated negligence are just as vile as any of the painful attacks unleashed by Garrett and the other small children.

Dressing the character in a nun’s outfit and giving her the delusion of piety could’ve formed a subtle attempt to cash in on the infamous "nunsploitation" sub-genre. This weird horror/skin flick mutation was popularized by Ken Russell’s The Devils and a glut of blaspheming 1970s Euro-sex films set in convents and other repressive environments. Sister Hannah’s negative religious significance is a strong reminder of how the 1970s saw a rise in atheism; it’s also an early hint of puritanical Christianity’s dramatic decline in popularity. By 1974 The Catholic Church’s horrifying sex abuse conspiracy hadn’t become common knowledge. Nonetheless, other elements of 70s culture made many Christian religions seem ruinous.

In the early-1970s conservative Christians claimed to stand for the philosophies promoted by The Ten Commandments and other humanistic Biblical tenants while also supporting the war mongering/prejudiced/classist politicians Richard Nixon, Ronald Reagan, Jesse Helms, and other far-right moral conservatives. By building a strong religious base of support for their dark political ambitions, Nixon and his contemporaries weren’t so different from Sister Hannah. By appearing to be a nun the character glows with innocence all while secretly maintaining and fostering an endless cycle of ruthless pre-meditated evil.