The Bubble is as Funny as Death 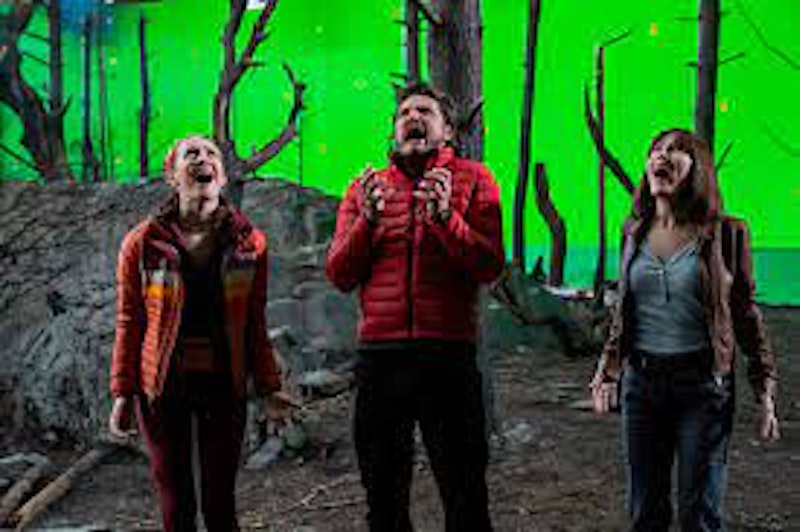 In his new film The Bubble, director Judd Apatow has chosen to combine a satire of today's blockbuster filmmaking with some current commentary on Covid protocols, and the quarantine moment of 2020. The result’s a disaster, the worst film Apatow has ever made. It's a Hollywood satire with no teeth, one that has nothing to say about any of its targets. All of the Covid material is painful and likely to age nearly instantly. It's a shockingly bad comedy that's almost entirely laugh-free, wasting the talents of a large cast of talented people.

The Bubble, which debuts on Netflix April 1, was directed by Apatow, who co-wrote with longtime South Park hand Pam Brady. With Funny People, back in 2009, Apatow showed some insight about showbiz. Here, he doesn’t, although the director has retained his penchant for way-too-long running times, as what should be a 90-minute movie drags past the two-hour mark. Like every other movie about showbiz in the last decade, roughly 80 percent of the jokes are about actors and filmmakers being smug, insecure, and/or selfish. It’s like The Player without naming names, or like Tropic Thunder without the risks.

The setup is that at some point in the pre-vaccine phase of the pandemic, a cast and crew have gathered under bubble conditions to produce a high-budget Hollywood blockbuster called Cliff Beasts 6. It's another sequel to a Jurassic Park-like, long-in-the-tooth franchise, and The Bubble was supposedly inspired by the mid-pandemic production of Jurassic World Dominion, a movie that itself hasn't come out yet. First they’re quarantining in a fancy hotel, and then filming the movie somewhere in England.

Karen Gillan plays the heroine, a lead actress who doesn't want to be there, while Pedro Pascal is the himbo leading man. David Duchovny and Leslie Mann are the on-and-off couple also in the cast, while Keegan-Michael Key plays an actor who's subtly trying to start a cult. Iris Apatow and Galen Hopper—the daughters of Apatow and Dennis Hopper—play TikTok influencers cast in the film. Fred Armisen is the director, and Peter Serafinowicz a producer. Maria Bakalova, the daughter from Borat 2, is in it too. Several other actors, including John Cena, John Lithgow, Rob Delaney, and Kate McKinnon, phone in their performances mostly via Zoom—as does Beck, who Zooms in inexplicably for a full-length musical number. (Cena, in particular, sports the exact facial expression he used in that video where he gave a groveling apology to China.)

These people have been very funny before. They're not funny here, because the material is awful. It’s a waste—Gillan’s usually a joy, and Pascal is capable of great things. Duchovny is in movies very rarely, but he’s given nothing to do here. The film has nothing to say—about movies, the pandemic, TikTok, or how Hollywood handled Covid. COVID isn’t easy thing to joke about, and every bit of pandemic humor in The Bubble is as funny as death.

Is the point that Hollywood people are shallow? That TikTok dances are stupid? That filming a massive project mid-pandemic is hubristic? These points have been made repeatedly for more than two years, and in some cases longer. There's nothing especially funny about the movie-within-the-movie, but the CGI in it looks like it cost a lot of money.

I laughed one time. It's when we learn of Gillan's unsuccessful previous project, Jerusalem Rising, which involved Israelis and Palestinians teaming up to fight aliens, and Gillan playing a character who's half-Israeli and half-Palestinian. Then I realized it was Apatow poking fun at You Don't Mess with the Zohan, which he co-wrote, except it was rednecks and not aliens.