Scream 5 is a far better “requel” than The Matrix: Resurrections. 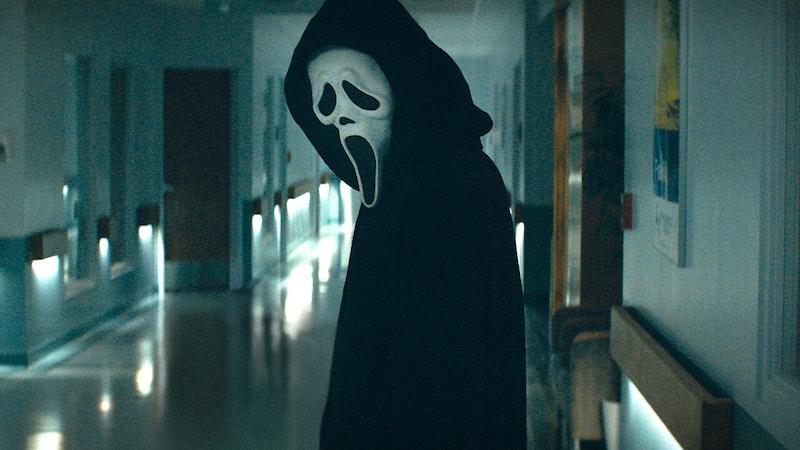 What’s most surprising about the new Scream is that there are still landlines, and teenagers are still picking up calls from strangers when they’re home alone. The latter is plausible, but landlines? In 2022? When Scream 4 came out in early-2011, smartphones hadn’t yet taken over society, but Kevin Williamson and Wes Craven’s prescient inclusion of a “live-streamer” years before Twitch took off should be pointed out (as he’s getting murdered, he screams “WAIT, I’M GAY! …DOESN’T THAT COUNT?” Not in the third sequel, dude). Craven died in 2015, and although the core surviving stars of the series—Neve Campbell, Courtney Cox, and David Arquette—were reluctant at first to sign on without him, they were won over by Matt Bettinelli-Olpin and Tyler Gillett (a directing duo also known as Radio Silence). So was I, and despite its maddening title (Scream), it’s better than the last one and on par with Scream 3, whose #MeToo undertones are now chilling.

But the landline—why does Tara Carpenter (Jenna Ortega) pick up the fucking landline? Suburban houses all over America probably still have landlines; I was shocked when a friend of mine told me in 2005 that his family had ditched their landline and switched to flip phones, and that’s still not the norm. Anyway, Carpenter, like almost all stars of Scream opening scenes, likes scary movies. The guy on the phone poses as an embarrassed AA member asking about Mrs. Carpenter, but it quickly becomes clear it’s Roger L. Jackson, aka Ghostface, the other returning star, on the other line. Carpenter doesn’t like slasher movies or Stab (the horror series within the Scream series that mirrors it)—she “likes elevated horror, like The Babadook.” As Ghostface ramps up his questioning and reign of terror on another poor girl alone at home, Carpenter screams “ASK ME ABOUT HEREDITARY! ASK ME ABOUT IT FOLLOWS!”

The Scream movies have always been funnier and smarter than their parodies, and they ride the line themselves between parody and sincere genre exercise, particularly this one. If Radio Silence can be criticized for anything, it’s giving Cox and Campbell too much “I’m too old for this shit” kind of dialogue that really misfires at the end. Fortunately, there’s a mostly new cast, starring Melissa Berrera as Tara’s sister Sam, and they’re just as fast and alternately flummoxed as the “teens” of all the previous Scream movies. Marley Shelton returns as well from Scream 4, with a son named Wes played by Dylan Minnette—they too are dispatched halfway through in the saddest scene in the movie, a mother racing home to save her son from an evil she thought she escaped, only to be stabbed to death as she opens her front door.

The film goes quiet after Shelton’s killed, and her son wanders around the house after taking a shower, oblivious to his mother’s mutilated body lying outside. But he never sees her: Ghostface stabs Wes in the neck, and we hold on them in a tight two shot as the knife protrudes out and he slowly dies, and that’s it—no dramatic pull, no whine, no cries for mommy. It’s a bum note in an otherwise impeccable Scream sequel, without any quality dip or glaring stylistic change. I think Craven is really overrated, particularly when it comes to Scream fans. This new movie, Scream—OH FUCK IT, it’s Scream 5, the movie is Scream 5, there’s no reason to “reboot” this series when the movie itself is a sequel to Scream 4! Maybe another attempted joke, but more likely an advertising decision.

Compared to The Matrix: Resurrections, an admirable but flawed experiment, Scream 5 is more fun and coherent, if not more intelligent. These movies have so much more to say about the pleasures and tortures of popular cinema, particularly in the opening scenes and anything including “the expert” (formerly played by Jamie Kennedy, here played by Jasmin Savoy Brown). They’re the ones who lay out the rules of the genre and the movie they’re in and we’re watching. More than half of the dialogue in this movie is characters talking about the movie they’re in, but again, it’s never tongue in cheek, because what distinguishes Scream from pure parody like Scary Movie is its commitment to commentary without ever breaking face.

Every movie should be two sides of a good argument. It should offer itself and its response, or at least the suggestion. When you have a movie talking to itself and other movies, amazing things happen, because the audience gets something and feels something that they rarely do. Mikey Madison plays Amber, who ends up being one of the killers, and if you remember, she played Susan Atkins in Once Upon a Time in Hollywood. She took a can of dog food to the face, a mad dog attacking her, running through a sliding glass door, and finally a finisher with Rick Dalton’s flamethrower. Well, here she gets to shoot a gun again and actually kill someone! But, she also gets set on fire again—this time, with the help of hand sanitizer.

As Sam says early on, “Every 10 years or so some nut decides to do it all over again—the last time it happened was in 2011.” Thankfully, there’s a new Scream movie coming out next March, and God help me if it’s called Scream 2. The title of the movie is made fun of in a quick joke, but it’s not enough. Come up with something like Halloween Kills or, I don’t know, Screaming? Scream Louder? Scream for Me? 5cream? This is gold I’m giving away!

I assumed Scream 5 was a dud when it came and went in February without any real attention, particularly compared to other legacy franchises and series released recently, but it continues the series unbroken quality streak, and if anything separates the Scream from other horror franchises, it’s how consistent they are. I like my Scream—regular.