Not a Dream About Mick and Keith

Just an odd moment from a baby boomer film. 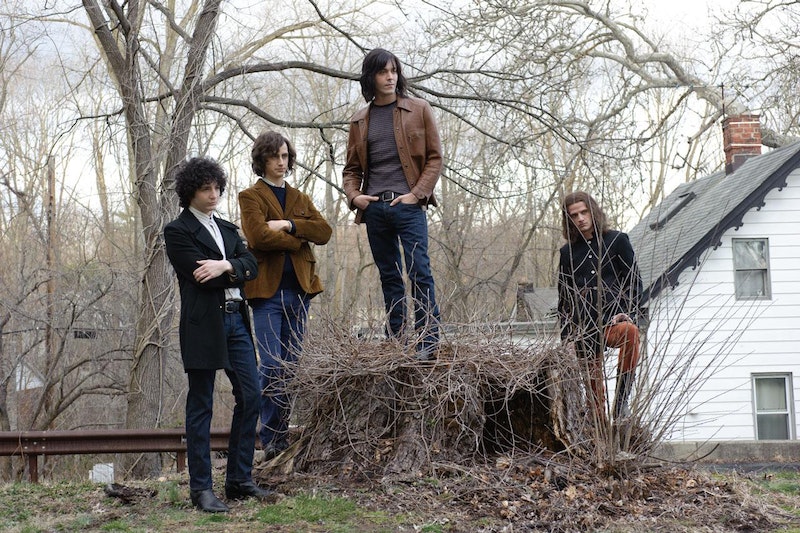 The bit lasts 53 seconds, and it makes you think you have the wrong movie. Black-and-white footage shows teenage Keith bumping into teenage Mick on a commuter train. They have that famous chat: Keith says he can play “Little Queenie,” Mick says he's been singing a little. Mick has a stack of blues albums on his lap, and he tells how he's been getting them mail-order from Chess. I read about this 36 years ago in a shitty paperback copy of Mick Jagger: Everybody's Lucifer by Tony Scaduto. I think the local library had it in the spiral rack for discards. Now, somehow, a top-quality recreation has fluked into being, and I saw it on Netflix. Late at night, and I was expecting David Chase's movie about growing up in New Jersey. Instead there's this black-and-white footage of a London commuter train from half a century ago. I thought I was dreaming.

My dreams are mostly chaotic, but sometimes I get one where I just settle in and watch someone I never expected to see. A dead parent, Bobby Kennedy, Neil Gaiman. I'm with them, in their presence. Movies and TV don't work that way, or not anymore. You're not with people, you have them flung at you, and the screen changes color and the music goes up to get your nervous system going. But that night on Netflix the black-and-white stayed in place and the train clacked away to itself. I liked how young Keith stepped aside for the old ladies; he would do that. His mouth gaped a moment as he continued on, and he looked like a dumb working-class kid, and then you saw how close he was to the Keith of the early record covers, who looked like a dumb working-class kid to certain eyes but was already Keith Richards, forthcoming number-two king of our planet.

Black-and-white Keith swings onto the seat next to his friend. The Keith actor really looks like Keith, body and face, and the Mick really looks like Mick, and they both talk and move the way Mick and Keith do, but they're kids. The actors are young, authentically young, genuine kids, and they look like their originals, no fudging necessary (almost none—I'd guess the black-and-white Mick is taller and has broader shoulders than the real one), and they're skilled actors. Their work is light and precise, and every moment is threaded with looks, gestures and intonations that you would expect the actual boy Keith and boy Mick to have come out with back at the dawn of creation. The camera sits and watches, everything in medium shot. Mick's face goes still and watchful at the mention of his friend's pricey guitar, and then his lower lip presses itself in before he manages a genial “Nice.” When Keith points, he does it almost overhand, like he wanted to swoop in and pry off the situation's lid.

Keith is played by Alfie Stewart, now 21, and Mick by Dominic Sherwood, now 25; they were 17 and 21 when the film was made. Sherwood looks set to be a TV pretty boy, no word on Stewart. It's possible they just have routine careers ahead of them. We have become so good at turning out actors that now producers can sort through the pile for random physical matches. The producer fishes up a couple of gems, but there are plenty of others. What matters about these two is that they look like Mick and Keith. David Chase, wanting to be an auteur after 40 years in television, puts them at the start of Not Fade Away, his first movie, because he can. Late at night on Netflix, a dream passes before my eyes.