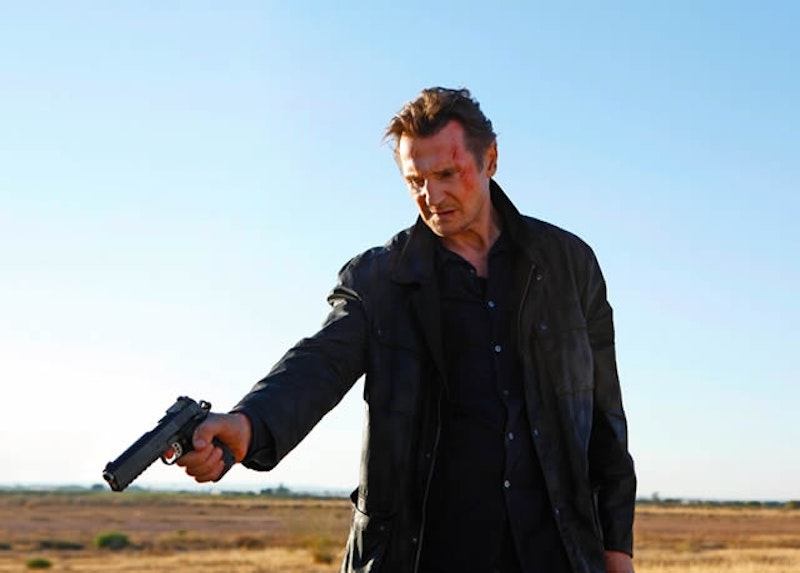 Released in 2008, the original Taken was a sleeper hit actioner about human trafficking and the pummeling of Eurotrash goons. Released in 2012, Taken 2 was a middling hit actioner about... well, about spinning the good will generated by Taken into a continued revenue stream. Released last year, the critically reviled but reliably lucrative Taken 3 is a movie about absolutely nothing. It’s largely pointless, though not soullessly pointless in the traditions of Bad Boys 2 or The Hangover 3—rather, it’s the kind of flick you can watch and enjoy on a service level, then safely completely forget about. And no, I am not up for a straightforward review of this turkey, so strap in for a “random notes” ride.

Forrest Whitaker co-stars as a semi-prescient police detective, or commander, or whatever, a role I’d swear I’ve seen him in a billion times even if it’s never happened before. He elevates the material in the script and makes the most out of unnecessary quirks—he carries a chess piece with him everywhere, he fidgets with rubber bands—and in a better world every movie set in L.A. would be forced to involve this character somehow.

Liam Neeson’s character’s black-ops pals actually get to do stuff in this one, unlike their Ocean’s Twelve-esque slumming cameo in the second one. Maggie Grace’s sustained bershon expression throughout: impressive. It’s like somebody demanded that she eat a bowl of live beetles. Not gonna get into the plot. It doesn't matter, anyway; nothing does.

But look, in the real world, if you provoked a dangerous police chase that resulted in the spectacular, violently presumed if not seen onscreen deaths of multiple civilians, there would be real consequences, right? Even if you were innocent and the police were wrong about you being guilty of a murder?

Well, of course Famke Janssen was destined to become the Franka Potente of this franchise. Swapping out Xander Berkeley for Dougray Scott as Janssen’s shady second husband is some cynical, Neverending Story series bullshit. For some reason, Wallace Langham is in the movie for roughly five seconds, when Neeson’s character car jacks him, then gives him his car back.

If this movie has a saving grace, it’s the complete and utter disdain Neeson’s character displays when the time comes to disable or kill someone, the bored grimace of a husband tasked with taking out the garbage for the trillionth time. It’s a chore for him, and an apt metaphor for watching Taken 3.