Paul Schrader’s film is a taut late career masterpiece. A 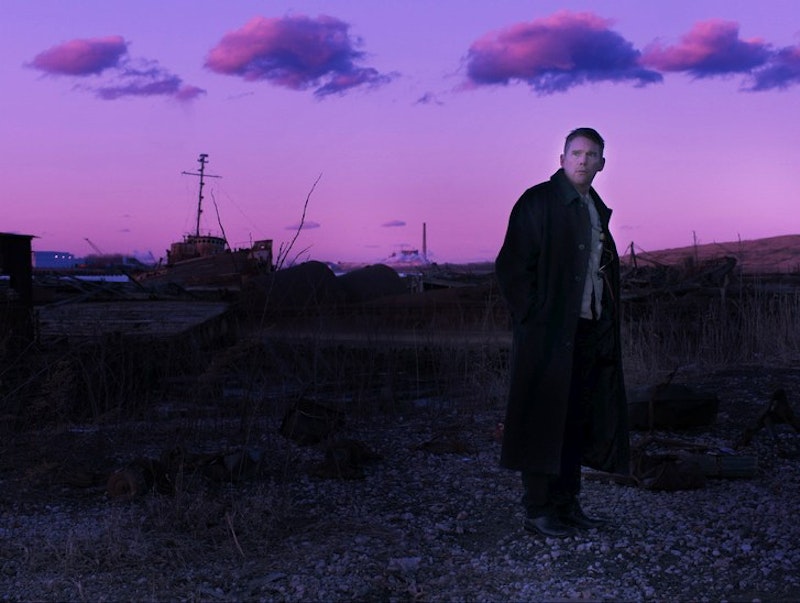 First Reformed, the new film written and directed by Paul Schrader, begins with a patient dolly shot pushing in on the eponymous church. The camera glides slowly over the ground, like a rogue phantom homing in on a new haunt. First Reformed Protestant Church is run by Reverend Ernst Toller (Ethan Hawke), and it’s an unassuming, even pathetic place, a “tourist church” with less than half a dozen congregants and a gift shop: hats, mugs, pins. Toller looks tortured as he’s forced to hawk this garbage destined for a landfill immediately after delivering his sermon.

His pain isn’t simply spiritual: Toller has a terminal illness of some kind, but he’s not in a hurry to find out exactly what, or quit drinking to impede its progress. We get all this out very early on, in a brutal close-up of Toller pissing blood. That’s only the first of half a dozen shocking moments and shots that come out of nowhere, including Toller walking through the woods to meet a man named Michael (Philip Ettinger) for counseling at the behest of his wife Mary (Amanda Seyfried), only to find him missing half of his head, a shotgun at his side, his brains and blood staining the otherwise untouched snow. This is all in the first half hour.

Schrader wrote a book about the “transcendental” cinema of Robert Bresson, Carl Dreyer, and Yasujirō Ozu, and in First Reformed, he uses the grammar of Ozu to perverse and disturbing effect. Whereas Ozu used tight composition, meticulous placement of objects and people within his frame, and head-on medium shots with characters addressing the camera to achieve a sense of intimacy and warmth with his small, humble subjects and their stories, Schrader uses these same techniques to bring the audience agonizingly close to Toller’s ruination and the hopelessness of the people around him and the bleak scenery of upstate New York.

Before blowing his head off, Michael tells Toller how opposed he is to his pregnant wife carrying their child to term, convinced that bringing life onto a dying planet that will be “inhospitable to human life” by the end of the 21st century would be a mortal sin. Toller pulls out a convincing counter-argument: he came from a military family, he served, and pushed his son to serve in Iraq despite his wife’s protests. His son was dead six months later, and his wife left him soon after: “I sent my child off to die in a war with no moral justification. I can tell you that the despair you feel bringing a child into this world is nothing compared to the despair I feel from taking a child out of it.”

This is without a doubt the performance of Ethan Hawke’s career. His face, lined with wrinkles and creases, is so expressive and does so much of the heavy lifting communicating the despair that swallows the characters of First Reformed. Though those sudden glimpses of gore and violence loom large over the film, most of it is “uneventful”: people talking, walking, eating, praying, writing. Its pace is assured and slow, but never boring: First Reformed’s rhythm and control is illustrated in that opening shot, a roving eye moving ever closer towards some kind of hell.

It’s a bone-chilling movie, with an ending that dips into magical realism and has left a lot of people mad and confused, but the most disturbing effect First Reformed had on me was its total lack of relief from suspense that slowly builds over nearly two hours. It ends with a moment of epiphany interrupted by a sudden cut to the void of a silent black screen, which is always bound to upset people, but we can infer where Hawke’s character will go from there, if anywhere at all. I’m not in a rush to see First Reformed any time soon, or maybe ever again, but it’ll be rattling around in my head for a long time, brain bleached and soul erased.