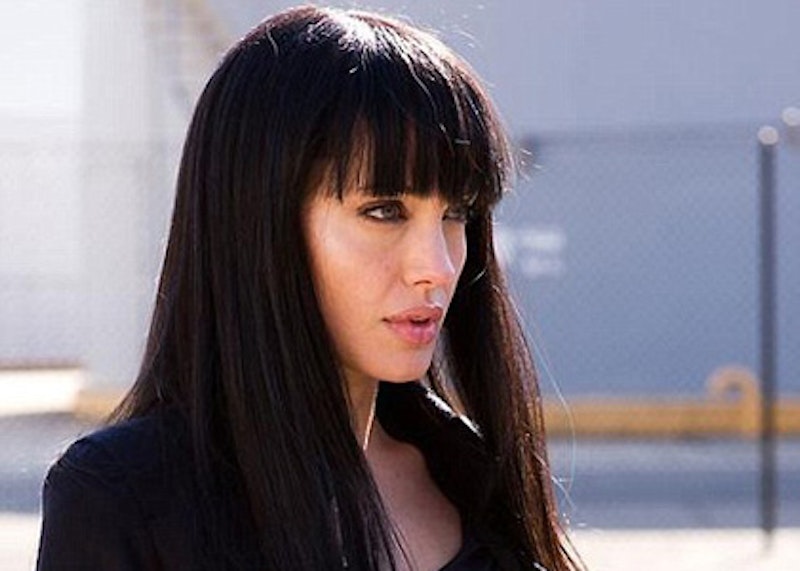 Like any generic spy thriller, Salt’s plot lumbers through its twists like a lead snake, with characters dutifully switching sides not on the basis of logic or coherence, but rather on what will be most “surprising.” Like any action adventure, it races from set piece to set piece with a minimum of glue or character development—escape from SWAT team, freeway chase, pause for meaningful flashback, blow up target, kill dozens, pause to explain to the audience how the protagonist was always the best even as a child. There’s a comforting inevitability to it, actually; things explode just when you’d expect, there are clever gimmicks distributed with almost mathematical exactitude (the best may be when the hero drives a car by tasering the cop in the driver’s seat so his leg jerks and hits the accelerator). The Russians are even the enemies again, in fine retro style. Really, the movie has only one distinguishing feature to speak of—its protagonist is the wrong gender.

Angelina Jolie, who plays super-spy Evelyn Salt, reportedly took this role over from Tom Cruise—and you can still see the seams. Of course, women as action adventure stars are hardly new; Jolie has made a career of such roles. Still, the spy-alone-against-the-world riff remains a fairly male-dominated purview, whether in Robert Ludlum novels or James Bond films. No doubt this is in part because the subgenre is so tied to the Cold War era, well before everybody figured out that men and women like to see some hot movie star with XX chromosomes beat the tar out of 10 men twice her size. Jolie did play a spy before in Mr. and Mrs. Smith, but that was a comedy, working in part off the incongruity of having both a husband and a wife who were operatives. Salt is played straight.

It’d be pleasing to report that the gender flip makes this a good movie. That’s not the case, unfortunately. The scriptwriters are not inspired, and Jolie herself is a dud. While, say, Daniel Craig’s cold stare manages to project a brutal intelligence, Jolie’s projects nothing; you can almost see the “This Space for Rent” sign hovering there behind her eyes. When she insists near the end, “They took everything from me. I’ll kill them all,” she sounds like someone who’s said it a million times before.

Still, putting a woman in the role does have some interesting consequences. Often in spy films—or any genre flick starring men, really—the story takes pains to establish the hero’s toughness before going on to show that he actually has a heart. Salt, though, moves in the opposite direction. The film starts off, quite gratuitously, with Salt beaten in a North Korean prison camp; in her first lines of dialogue, she’s begging helplessly. After that, we see her in tender moments with her husband, and it’s only subsequently that she turns into the evil, affectless Terminator. So instead of a toughie with a (sporadically) tender heart, we get a soft woman who transforms (remarkably rapidly) into a killing machine. Apparently if you’re going to have a woman go rogue and kill dozens, you need to show her being beaten up and in distress first.

It’s also interesting to see the gender switch work itself out with Salt’s husband. We first see him as the rescuer; it was because of his efforts that the U.S. agreed on a swap to get Salt out of North Korea. He only gets to be her manly-male protector briefly, though; most of the film is about her efforts to save him. Like many an action hero, then, her spree of brutal violence is motivated by a threat to her loved ones—but unlike those other heroes, her defense doesn’t fit easily into her gender identity. Guys are sexy when they get all protective; women are archetypal and badass and sexy when they defend children. But a woman defending her mate doesn’t fit neatly into a genre narrative—which is maybe why, despite the sepia flashbacks, the movie has trouble making a convincing case as to what precisely Salt sees in her husband. Maybe it’s also why her quest to save him fails so anti-climactically. The camera barely even shows him clearly as he’s shot right in front of her, as if the filmmakers want to let us know right at the end exactly what they think of this nonentity who needs his wife to fight his battles for him.

Perhaps this ties in to the most unexpected result of having a female protagonist: it seems to have completely drained all the sex from the film. The film is amazingly circumspect; Jolie is dressed sensibly throughout, and even at times (as when she disguises herself as a man) more than sensibly. There are no sex scenes, and barely even any romance—there’s one mildly intense kiss with her husband, but that spy-thriller staple, the seduction of the enemy, is nowhere to be seen.  Perhaps part of the problem is the old double-standard; men can seduce lots of women and that makes them rakish; if Jolie were falling opportunistically in bed with the enemy in order to manipulate them, her character would be far less sympathetic. So instead the film opts to make her traumatized, humorless, and almost neutered; she might as well be in some sort of earnest movie of the week weeper.

But while you can trace the causes, the outcome is positively bizarre. I mean, this is a summer action/adventure blockbuster starring Angelina Jolie, and it seems to have no interest in appealing to my prurient instincts. That’s…not what I was expecting.

I can’t imagine it was quite what the creators intended, either. It’s hard to imagine the meeting with the backers where the director said, “You know, I think for this film we’re going to hire Angelina Jolie in order to utterly eschew sexiness of any kind.” It seems more likely that they had some intention of having a sexy action heroine kicking ass, and a similar intention of having a spy-thriller with sexual tension—and then they put the two together and the sex dribbled out. Gender is usually quite important to the working of genre; the mastery, the close-mouthed mysteriousness and the steely violence in spy thrillers, for example, are all fairly clearly coded male. It doesn’t seem like it would be too hard to tweak those tropes a little—but, well, trans-gendering the spy thriller hasn’t been that common, and this crew just isn’t that smart. The result is a pallid curiosity. I can’t exactly recommend this movie, but if you go, you’ll be unimpressed in some slightly unusual ways.