Does it really matter that the James Bond franchise's future is uncertain? 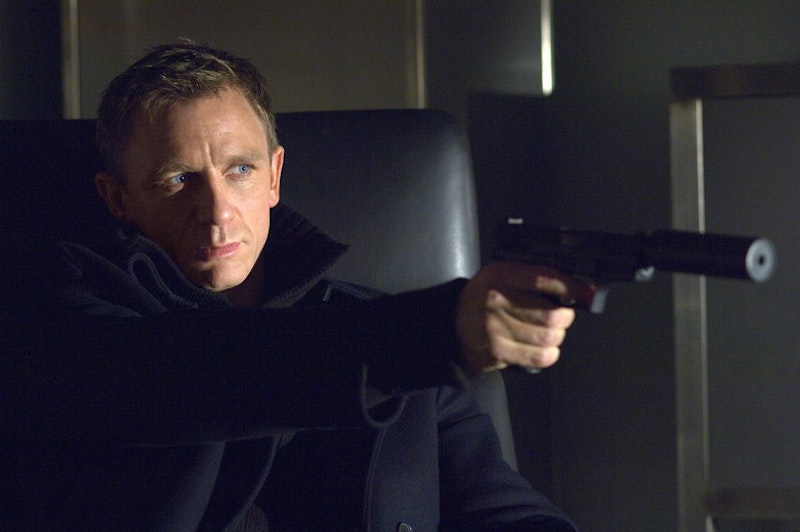 For someone connected with Goldfinger, GoldenEye, and The Man with the Golden Gun, James Bond’s future is anything but golden. Since April, when producers officially pulled the plug on 007’s 23rd official outing due to studio MGM’s financial difficulties, much of the media world’s gone nuts over whether Bond’s license to kill has finally been revoked.

There’s been little public outcry, however. Doubtless that’s due in part to the inherent difficulties of understanding MGM’s money morass. But it may also speak to the other distractions offered nearly weekly to Bond’s core audience of action aficionados: The Bourne films have helped beget a slew of globe-trotting, eye-popping adventures, from the rebooted Batman franchise to Angie baby’s one-two punch of Wanted and Salt. (Not to mention Bond himself, in the case of 2006’s successful revival with Casino Royale.)

There’s also the question of how to miss 007 when he won’t go away. Thanks to endless reruns of the previous films on the likes of TNT and Spike, everyone aged eight to 80 can now quote extensively from everything from Dr. No to Quantum of Solace—though they may still have difficulty distinguishing the generically-titled Pierce Brosnan entries (The World Is Not Enough, Tomorrow Never Dies, Die Another Day) from each other.

Bond’s faced an army of imitators and competitors before, of course; practically from the series’ very beginning there have been such spoofs as Carry On Spying, James Coburn’s Flint films, Dean Martin’s Matt Helm movies, the 1967 all-star Casino Royale and the latter-day Austin Powers pictures, while the Die Hards, Indiana Joneses and various Stallone and Schwarzenegger actioners plied allegedly witty quips at the drop of an H-bomb.

But in today’s Mr. and Mrs. Smith world, where even a suburban American couple can get away with destroying most of their surroundings while still finding time for a smooch, does the British lone wolf Bond still have a place? Criticized for years for being too goofy (mostly during the later Roger Moore years), 007 began to retrench as early as 1987’s The Living Daylights, with the promise that new Bond on the block Timothy Dalton would play the character more leanly and meanly, a la author Ian Fleming’s original creation. Ditto Brosnan and, most successfully, Daniel Craig in the last two features.

There was still plenty of time for girls and gadgets, of course, and a little fun with current events (seen today, the poorly remembered Daylights actually turns out to be a relatively rousing entry, even if the film’s pro-Afghani rebel stance is now nearly as risible as Joe Don Baker’s buffoonish villain). Craig’s Casino upped the stakes considerably, definitively turning the clock back to Fleming’s cold-blooded assassin—one whose heart could still be broken, much to our (and his) surprise.

With Craig now off to do the Anglo remake of The Girl with the Dragon Tattoo, Bond’s producers are left wondering when, if ever, they’ll get back into the Aston-Martin seat. A recent Hollywood Reporter article quoted one observer as saying, “They’re completely panicked that if they go five, six years without a Bond movie, it’ll be over.” (Amusingly, the piece’s subhed notes that co-producer “Barbara Broccoli doesn’t want to work with ‘assholes,’” a quote that shows up nowhere in the article itself; good to see that Janice Min’s tabloidization of the trade is well under way.)

With the original Fleming tales long depleted, the general consensus that Sean Connery will never be bettered in the role, the past films’ ubiquity on cable, and the ever bigger (if not necessarily better) booming explosions on the screen, do we really need Bond 23? Or should he be consigned with the Thin Mans, Whistlers, and other long-retired film series heroes?