A Manhattan retrospective may finally give the director his due. 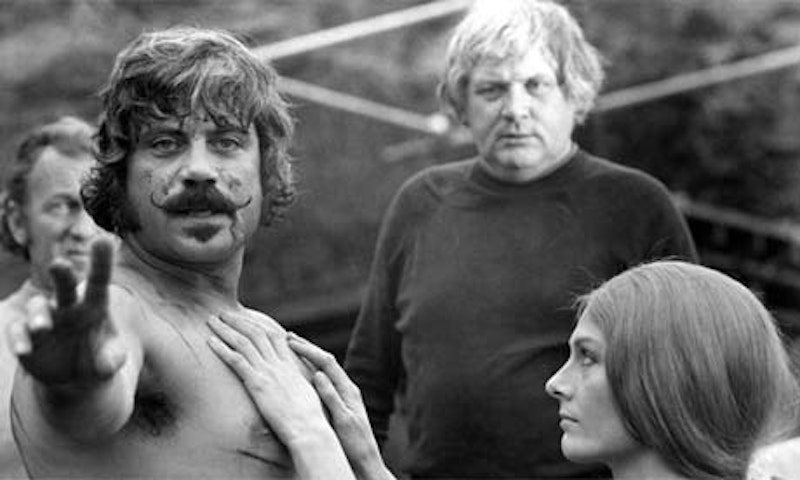 One-time enfant terrible of the British film industry, director Ken Russell is now 83, some 20 years removed from his last major production and remembered, if at all, for besmirching 1970s movie screens with his quasi-operatic sense of questionable taste. But unlike near-contemporaries like Richard Lester and Michael Winner, Russell is still very much active, overseeing “home movie” adaptations of The Fall of the House of Usher and Moll Flanders and semi-presiding over the rehabilitation of his career.

Russell will be in attendance during the evening presentations of “RussellMania,” a retrospective running July 30 to August 5 at The Film Society of Lincoln Center in Manhattan. The series includes his best-known works—the Oscar-nominated D.H. Lawrence adaptation Women in Love and his deliriously overblown take on The Who’s Tommy—as well as his intriguing biopic Mahler, his one-two 1971 punch of The Music Lovers and The Devils, and the awful Lisztomania, with Roger Daltrey as Franz Liszt and, indubitably, Ringo Starr as The Pope.

It’s The Devils that the Russell revival seems to be pinning most of its hopes upon—the director appeared at its showing at Montreal’s FanTasia 2010 festival this past weekend—and with good reason. Dealing with the 17th century execution of a French priest who allegedly brought about the demonic possessions of a nearby convent, The Devils remains a hair-raising work, with Russell’s over-the-top tendencies given free rein; if you’re looking for a movie with a “rape of Christ” sequence, fantasy scenes of the priest played by Oliver Reed as Christ descending from the cross for Vanessa Redgrave’s hunchbacked nun to lick his wounds, or of Redgrave masturbating with a burnt femur, then this is the film for you.

And yet The Devils treads the line between horror and camp delicately; the underlying themes of this dramatization of a real-life incident are, after all, the ills of sexual repression and religious hypocrisy, and it’s Russell’s prerogative to depict the events as he sees fit, rather than take the high-minded route that a Fred Zinnemann or Michael Powell might have. As a result, however, the film has appeared mostly in cut versions, and ongoing hopes for a DVD release have remained unrealized.

Also well worth seeing is The Music Lovers, with a then still safely closeted Richard Chamberlain wrestling with Tchaikovsky’s homosexuality as his nymphomaniac wife, brilliantly played by Glenda Jackson, descends into madness. (Harlan Ellison once described its conclusion as “the single most frightening cinematic image I can remember.”)

Russell followed this pair of pictures, overripe for rediscovery, with the relatively placid likes of The Boy Friend, Savage Messiah, and Mahler before diving into Tommy, with its pinball-topped crosses, quivering Tina Turner (who apparently uses hypodermics to ingest acid), and Ann-Margret receiving an Oscar nomination for, among other things, writhing around in baked beans as an apparent homage to The Who Sell Out.

“Overripe” doesn’t even begin to describe Lisztomania, a bald attempt at repeating Tommy’s success but with Rick Wakeman and a never-ending army of phallic objects in an evident attempt at outdoing the worst excesses of Fellini, Pasolini, and himself. (Yet think of what he could have done with Sgt. Pepper’s Lonely Hearts Club Band!) He regrouped for the troubled Altered States and the wigged-out Crimes of Passion before descending into self-parody with the likes of Salome’s Last Dance and the enjoyably preposterous Lair of the White Worm.

It would be nice to see Russell regain some critical standing during his lifetime, especially as he was often dismissed even during his 70s heyday as all style and no substance. A growing library of critical reassessments on the shelves (in addition to his own autobiography, there’s Kevin Flanagan’s pricey Ken Russell: Re-Viewing England’s Last Mannerist and Joseph Lanza’s wincingly titled Phallic Frenzy: Ken Russell and His Films) bodes well for his rediscovery by cineastes worldwide.

In the meantime, there’s an online petition to Warner Bros. to finally give The Devils its DVD due. Sign it today, and perhaps it will be made available sometime during our lifetimes.