Through a Touchscreen, Darkly

The fiber-optic nightmares of Black Mirror. 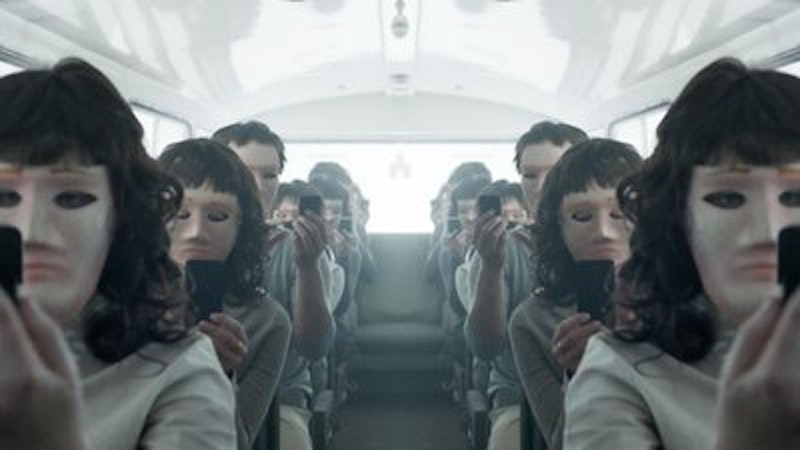 When you’re launching a dystopian television serial about the dangers of social media technology, perspective is important. That’s why “The National Anthem” absolutely had to be the first episode of Black Mirror: an outlandish yet potentially possible horror rooted in present cultural mores. To dip a toe into this upstart U.K. series, the brainchild of creator Charlie Brooker, is to want to leap into the psychologically polluted lake of its entirety. (Officially, it’s only available via Netflix and DirecTV, but episodes from the program’s two seasons have popped up, guerrilla style, on YouTube.) To relate what happens in “Anthem” here hardly spoils it, or lessens its impact.

Nutshell: the British Prime Minister is bullied into having sex with a pig, on live television, in order to save the life of a kidnapped princess. What’s fascinating is the nature of the bullying, which emerges through Twitter and YouTube. The winds of public pressure are variable from hour to hour, with the PM and his braintrust reacting and counter-reacting, media outlets improvising coverage on the fly and struggling not to be left behind, and ordinary citizens cycling between prurience and excitement. Afterwards, it’s a complicated business to come to terms with what we've just seen, but difficult to deny that what we've seen could plausibly happen.

“The Waldo Moment”, the episode that technically caps Season 2, pushes, present-tense, into wilder territory: there’s no way a crude cartoon bear voiced by a failed comedian would ever be allowed into an election, but he could certainly have a powerful effect on public opinion, which was the larger point the show wanted to make.

Beyond those two examples, Black Mirror goes speculative fiction apeshit with aplomb by positing futures that resemble now in ways direct or indirect. While every one of the remaining five episodes are disturbing in one way or another, some are more effective and penetrating; these vistas shine especially bright when the scripts don’t deign to over-explain their milieus, forcing the audience to connect some dots, put in some mental work. “Be Right Back,” wherein opt-in technology that’s supposedly “in beta” allows a grief-stricken widow to clone her dead husband, felt mawkish, uncomfortable, nearly unwatchable on several levels—but my dislike of it didn’t lessen what I like to think of as the acrid aftertaste of this show, when you catch yourself sussing out the potential societal implications of each advance. (Sex slaves! Rampaging armies and sweat shops of the-not dead! The 1% playing cruel hoaxes on one another! Okay, I digress.)

More successful and devastating were “The Entire History of You”—that’s the one Robert Downey, Jr. optioned for a possible film—where optic cameras allow everyone to store and abuse memories via an implant, and “Fifteen Million Merits,” which skewers and subverts our deepening addictions to apps and lame reality television.

This leads us to Black Mirror’s two fiercest installments to date: “White Christmas,” and “White Bear.” The when of “White Christmas” presents a world where, thanks to eye implants everyone has and can’t get rid of, you can “block” people in real life, much like you can on Twitter. The difference is that when you've been blocked, the other person cannot really see you, and you can’t see them; you each appear to one another as an intelligible, gray-white blur, a twist on how figures are rendered when viewed through night-vision goggles. It’s also a world where the well-heeled can clone their own consciousness.

The episode begins with two men talking in a remote, cozy cabin in the depths of winter and ends, more than an hour later, in that same cabin—but with our perceptions of what that cabin represents wildly rearranged. To say more would ruin everything, because Twilight Zone-out pain and pleasure of “White Christmas” hinges on avoiding spoilers. Let’s put it this way—the use of the phrases “Merry Christmas” and “It’s Christmas!” become profoundly, agonizingly ironic in this context.

In “White Bear,” an accomplice in the gristly murder of a small child—she filmed it, while her boyfriend did the deed—is run through an elaborate obstacle course intended to simulate a sort of societal, technological plague as part of her sentence. She and her seeming saviors and antagonists are constantly smart-phone photographed, which triggers broken, torturous memories, and at the end it’s revealed that she’s being run through the course every day, over and over, with her memories of what just occurred violently wiped in one of the most seat-squirming sequences you will ever see in a television show.

What’s somehow worse? The scenes following the credit sequence, where the actors and bused-in, smart-phone totting volunteers are briefed on what their roles are and how they are to behave. These scenes are framed in a merry, just joshing way, a cross between a movie gag reel and a behind-the-scenes special, and it’s horrible to watch elderly folks and children laugh good-naturedly as the lead actor explains what they are to do and why in an amused way. It’s entertainment. It’s wholesome. It’s a way to kill time on a dull weekend, throwing packets of red fluid at this woman while she’s disoriented and encased in a glass box and howling for her death and screaming at her. It’s the spectacle of lynching, drawing-and-quartering, or the guillotine in the public square, updated for three days after tomorrow, and it’s a dark, warped reflection of where we all might be headed soon.