Moviemakers have a long history of perpetuating snake myths. 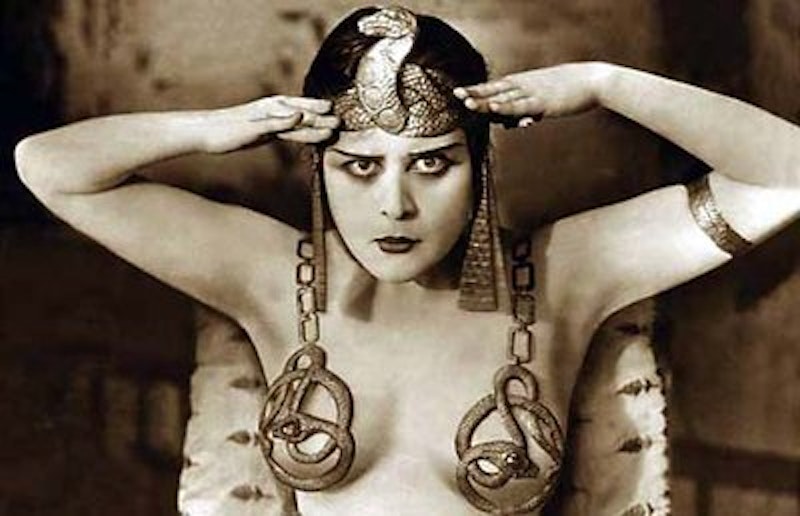 When it comes to Hollywood’s portrayal of snakes, there are two unwritten rules. All snakes are evil and the only good snake is a dead snake. The 2013 film Mud exemplifies the typical cinematic attitude toward snakes. A boy tells Matthew McConaughey that he’s afraid of snakes. McConaughey replies, “That’s cause God put ‘em here for us to fear. We knew to be afraid of snakes long before we even got into this world.”

Since the early silent days, filmmakers have associated snakes with villainy and danger. In the 1922 film Dr Mabuse: The Gambler, director Fritz Lang portrayed criminal mastermind Dr. Mabuse as owning poisonous snakes and milking them of venom before killing his victims. In The Winning of Barbara Worth (1926), a young Gary Cooper exhibits his heroism by shooting a rattlesnake dead. Silent film vamp Theda Bara wore a risqué snake serpent bra in Cleopatra (1917) to emphasize her exotic nature. Before the film ends, she’s fatally bitten by a snake.

Moviemakers have a long history of perpetuating snake myths. A common cinematic conceit is that snakes swarm in groups. We see this in True Grit when the young girl Mattie falls into a mineshaft filled with a horde of rattlesnakes. In reality, snakes are solitary. They only gather in groups during hibernation to stay warm.

Another myth is that snakes of different species swarm together. This is the case in the scenes from Raiders of the Lost Ark. Indiana Jones is trapped in the “Egyptian Well of Souls.” He finds himself surrounded by cobras, adders, vipers and boa constrictors. This would never happen in nature. Snakes of different species fight to the death for territorial dominance. During filming of the actual Raiders sequence, one of the pythons died after being bit by a cobra.

Hollywood westerns are guilty of their own apocryphal snake folklore. John Wayne advised characters to sleep on their lasso since snakes do not slither across a coiled rope. This is not true. Snakes crawl over ropes, cactus needles or anything else in their way. Westerns also featured horses rearing up to smash rattlesnakes into the ground. In reality, the only way horses protect their owners is by causing ground vibrations that scare away nearby snakes.

Movies have taught us that snakebites are best treated by cutting open the wound and sucking out the venom. Herpetologists claim this is one of the worst things you can do. Cutting open a snakebite does not isolate the fast spreading venom. It increases the risk of infection. Since rattlesnake venom digests meat on contact, sucking out venom can actually dissolve a person’s tongue or lips.

Movie snakes always make a lot of noise. They hiss or rattle or squeal before attacking. In nature, snakes opt for silence. Even rattlesnakes only rattle when threatened. Movie snakes strike again and again with an endless supply of venom. In reality, snakes preserve their venom and attack as a last resort. Once a snake injects a full dose of venom, it takes up to four days to replenish the supply.

The 1960s and 70s saw a rash of cheesy B-Movies featuring snakes as villains. These include the classically absurd Sssssss (1973) where mad scientist Dr. Stoner trained cobras to attack humans in an effort to transform victims into snakes. The film’s promotional poster read, “Once this picture sinks its fangs into you, you’ll never be the same.” In Rattlers (1976), a snake den is contaminated by experimental nerve gas inducing ultra-violent behavior. The snakes terrorize naked women while they’re bathing and become experts at biting the tires of passing cars.

The 80s and 90s spawned movies about giant monster snakes. In Conan the Barbarian, Arnold Schwarzenegger wrestles a huge snake in a scene replete with homoerotic imagery. In Anaconda, a monster snake terrorizes a documentary film crew in the Amazon. In Python, a genetically enhanced python attacks the inhabitants of a small American town.

The 2006 schmaltz fest Snakes On A Plane combined B-movie kitsch with big budget commercialism. In the film not only do snakes hiss, they actually growl. They exhibit an ability to leap long distances and they bite again and again without mercy. The whole point of the film is to watch snakes kill people in the most vicious ways imaginable. The killings include a man seated on a toilet, a couple having sex in the airplane bathroom and a snake attacking from within an airplane barf bag.

While the special effects for Snakes On A Plane rely largely on computer graphics, Hollywood snake depictions have come a long way. In the original King Kong (1933), filmmakers relied on stop-motion animation to depict a giant snake. In Gunga Din (1939), clearly visible strings are used to maneuver blatantly fake snakes. In Billy Wilder’s Ace In The Hole (1951), Kirk Douglas offers some hamburger to a rattlesnake that’s obviously dead and stuffed.

As movies became more sophisticated, directors insisted on using live snakes. By the 60s, snake wranglers became common on film sets. They kept snakes refrigerated before filming so the animals would be less active around actors. They also milked poisonous snakes of venom so potential snakebites would yield dry bites.

Actors often insisted on working with poisonous snakes. Paul Newman tosses a live rattlesnake toward a guard in Cool Hand Luke (1967). In Race With the Devil (1975), Peter Fonda handles a hissing rattlesnake he finds in his trailer. In the 2014 film Joe, Nicolas Cage handles the most lethal snake in America, a live copperhead.

During production of Snakes On A Plane, snake wrangler Jules Sylvester kept 60 live snakes on set at all times. Most were non-venomous species like king snakes, rat snakes and milk snakes. Corn snakes were especially prized since they came in 30 different colors and were known as good wrigglers. According to Sylvester, “There is no training involved. You simply let the snakes do snake stuff like moving from light to darkness and from warm to cool.”

For the “Well of Souls” sequence in Raiders of the Lost Ark, producers had 6500 live snakes on set. Legless lizards were also used. After director Steven Spielberg insisted on even more snakes, garden hoses were cut into proper lengths and dispersed around the set. On the day a live cobra was used, two doctors with anti-venom remained on set at all times.

As Hollywood continues to give snakes a bad rap, perhaps a new positive snake movie is needed. Here’s my idea. After a long and cold winter, the snakes suddenly disappear. The world is overrun by rats carrying a vicious new plague. As people die by the thousands, a heroic geneticist attempts to clone a venomous rattlesnake that will kill the marauding rats. Can the snakes be cloned in time to save the day? Snake Resurrection: The Reckoning.