How the Sausage Is Made 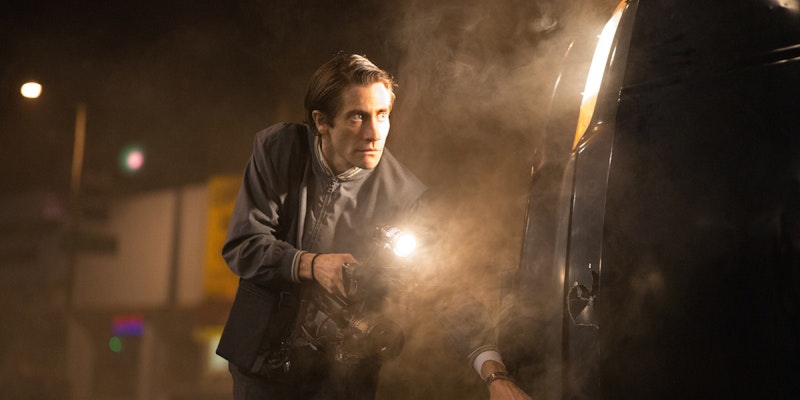 Nightcrawler is a deceptively gorgeous movie, shot mostly at night, in which Los Angeles is a sumptuous sprawl of street lamps and headlights. Over and over we watch the shadows melt into back into bleak daylight, each new dawn bringing with it a spate of early morning television newscasts: blow-dried anchors, blaring headlines, and fresh, gristly footage. Many of the more terrible images we see—dead bodies in a mansion, car wrecks—come courtesy of Lou Bloom (Jake Gyllenhaal), a sort of self-made entrepreneur. Bloom’s lean, bug-eyed, and calculating, articulating business lingo in an empty, detached way, and literally stumbles upon and into this career—the perfect fit for a brooding sociopath—by accident.

Gyllenhaal imbues the character with an increasingly feral air as the script ups the cutthroat ante and takes on the feel of a twisted Peter Drucker business tome, charming and then checkmating a morning news director (Rene Russo), hiring inept help for peanuts (Riz Ahmed), and eyeing the competition (Bill Paxton, whose grizzled veteran almost deserves his own movie). And as Nightcrawler becomes a blur of police-scanner porn, smart-phone address searches, and fake blood, we watch Bloom begin to manipulate events in his favor: moving a corpse to better frame a shot, filming a massacre before authorities arrive, orchestrating a massacre to shoot it from two different angles.

If the first half of Nightcrawler was full of audience laughter and people directing the protagonist to “go fuck yourself” in inventive ways—which got to feeling like a running gag—by the time the hour mark passed, we’d all hushed up, the tension thick, the many charged, reckless drives through downtown no longer so vicariously exciting. And those luscious nightscapes, those breathtaking eyefuls of darkened city? Those no longer seemed quite so luscious or mesmerizing, as suddenly you watched them through Bloom’s eyes, and all you could see were victims.