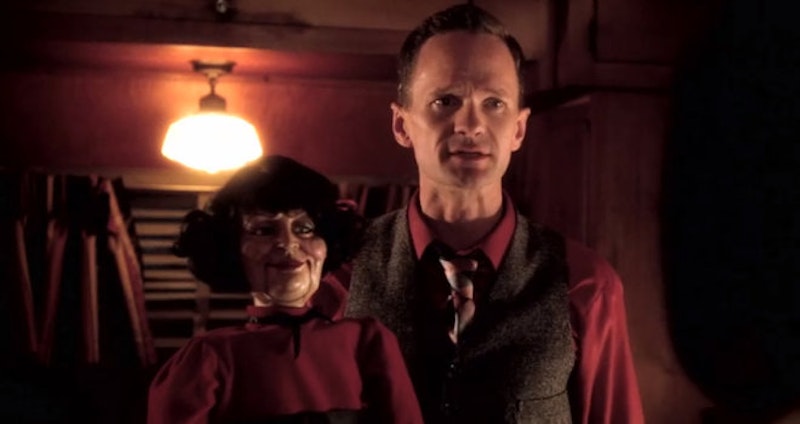 • After an emotionally manipulative episode about Pepper and a Christmas hiatus, American Horror Story returns with Mister Spencer attempting to convince Jimmy to cut off a hand in order to pay for a good lawyer. I'm truly not sure what Mister Spencer has done all season to deserve such unwavering trust, but Jimmy goes along with it, drinking some roofies before waking up in the hospital without both of his lobster hands. This amputee scene is a little too reminiscent of when Chloe Sevigny got both her legs chopped off in season two, but I digress.

• Bette and Dot are finally acting like the Olsen twins. They’re soul sisters and even decide to burn their diaries because there are no longer any secrets between them. They spend their afternoons inviting the male freaks to their tent in order to audition them to take their virginity. They announce that their “top priority is sex,” and basically don’t mention that Jimmy, the man Bette loved, is still incarcerated.

• Fear not, though, twins! Neil Patrick Harris joins the cast as Chester, a traveling sales man/WWII vet with a plate in his head. He wants to join the freak show in order to sell his iguanas or do magic or some shit but Elsa is like “lol no.” He finally convinces her to let him join the show when she sees his impeccable book-keeping.

• Chester has a dark side though, as does every character on AHS. The incredible Jamie Brewer (who was Nan in season three) returns as the voice of Marjorie, Chester’s disturbing puppet who speaks to him. After Chester came back from the war, he discovered his wife had taken a lady lover. They all lived in a house together and it was like Three’s Company, except Chester was always apprehensive about joining them in bed. One afternoon Marjorie got the idea that they needed to kill both the ladies and Chester did so in gruesome fashion.

• Unbeknownst to the twins, they decide to sleep with Chester while Marjorie, his doll, watches. This past year has been a butt renaissance for Neil Patrick Harris. First he shows it off in Gone Girl, and now on AHS, and I’m not complaining.

• Dell shows up at the hospital to find Jimmy without hands. He’s distraught but plays it cool, claiming he knew a guy once who lost both his hands and now can do all that “normal cook shit” with his prosthetics. They have a tender father/son moment in which Jimmy and Dell agree to buy the freak show and make a business of it together. This seems a little strange, seeing as the entire season Jimmy has been trying to get away from the freak show.

• Dell gets back to the freak show and tells Elsa what Mister Spencer did to Jimmy. She's horrified but also like, "lol whatever, I'm going to California, bye!” Amazon Eve and Dell team up together and decide to break Jimmy out of jail as he's being moved back into a cell from the hospital. Seriously though, how did Mister Spencer convince the guards to be like, “Hey, I have to take this murderer here to get his hands chopped off now I’ll be right back”? Dell gets shot in the arm, but Amazon Eve is able to bludgeon both the police officers to death and set Jimmy free.

• Back at the freak show, Elsa decides to screw everyone over who has been loyal to her by letting Chester buy the freak show from her. When Chester suggests that Marjorie the doll would like to stay in Elsa’s tent once she leaves, she seems a little creeped out, but they continue the deal none the less. Why would Elsa sign over her freak show to an insane man she just met who has a doll that looks like it belongs in a Chucky movie? Because the writers truly don’t know about plot consistency.

• Dandy finally reappears in the last few minutes of the episode, after his private eye police officer brings him photos of the twins being deflowered. He shows up at the freak show and attempts to convince Chester that Marjorie is angry with him for not including her. I hope the season ends with a showdown between these psychopaths because then finally I would feel like I’m watching a season with substance.

• Oh yeah, Emma Roberts shows up in the last few minutes as well to show Elsa Ma Petite’s body in a jar. How the hell a girl weighing a collective 85 lbs was able to move a heavy glass jar like that across Florida is beyond me. In Dell’s tent, Desiree holds up a gun to him and asks him to confess to the murder of Ma Petite. When he does, out of nowhere, Elsa shoots him between the eyes and the screen goes blank. Once again, an AHS story arc (the one between Jimmy and Dell) goes to waste.