Heroin and color blocking in Pedro Almodóvar’s laid back and amusing Pain and Glory. A- 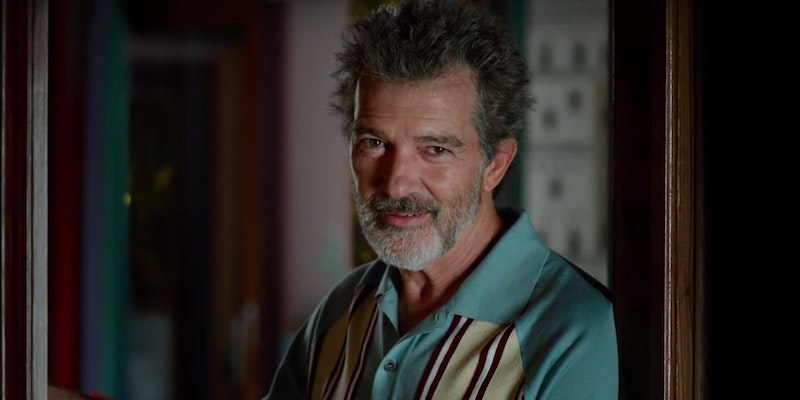 “Inspired by 8½” should be warning enough, but Pedro Almodóvar has made enough good work to justify such an exercise (or an indulgence, depending on how you enjoy it). He’s 70, older than I thought, and just going by the actuarial tables, who knows if he has another decade? Pain and Glory isn't a boorish bloated self-crowning indulgence, it's a surprisingly nonchalant and comfortably sentimental.

Almodóvar’s doppelgänger Salvador Mallo (Antonio Banderas) hasn’t made a film in years: besides a lack of inspiration, he has severe chronic pain from a compressed spine—illustrated in a CGI interlude imported from an Eiffel 65 music video—leaving him unable to carry out the “very physical work” of filmmaking. He reconnects with Alberto Crespo (Asier Etxeandia), the star of his Sabor, a film from 32 years ago “now considered a classic,” and starts smoking heroin during his visit (whenever he's high, Alberto Iglesias' score pulses an ambiguous tone, warm but minor, a threat of tragedy that never comes). This isn’t a message movie, or a mess of self-pity: what could’ve been a dour bore turns into Almodovar’s funniest movie in years.

Banderas is hilarious as Mallo, who spends most of the movie looking like a confused old dog, always quizzical and wincing. There’s no downfall and far from rock bottom: Mallo and Crespo skip a Q&A after a screening of the restored Sabor, and Mallo calls in instead, high on heroin. There are no consequences, and it’s one of the funniest scenes in the movie. Mallo’s daydreams looking back at his childhood are typically lyrical, with Penelope Cruz playing his mother Jacinta. Mallo’s father finds them a new place to live in the Spanish countryside, and Jacinta is incredulous: “We’re going to live in a cave!” But there are no bitter recriminations, molestations, divorces, or trauma viewers have been conditioned to expect in films with similar setups.

But everywhere that Almodóvar could’ve raised the stakes, he lays off. He lets his younger self (Asier Flores) act his sexual awakening purely through montage and a canny use of close-ups. The young bricklayer isn’t lusting after the kid, and there’s none of the Catholic guilt or high drama that defined another autobiographical film of his, Bad Education. This movie also feels a world away from the filmmaker doppelgängers in Laws of Desire and Broken Embraces, which are much darker and operate in an arch, high stakes register that Pain and Glory rejects in favor of real reflection. I think Richard Brody’s review gets close here: “[Almodóvar] realizes intentions and assertions rather than experiences. The movie’s expressive moments—and there are many—are largely uprooted, decontextualized, and dematerialized, planted like index cards rather than allowed to unfold and to develop.”

There are distinct episodes, but this film should've been longer than two hours. Linger more, like with Crespo's one-man theatrical performance of Addiction, a play by Mallo but never published or performed. In comparison, the episodes with the past lover and Cruz with younger Mallo feel slight in comparison. Almodóvar has never made a movie longer than 128 minutes or so. I agree that Pain and Glory feels oddly surface level and at times superficial for such a personal memory piece, but that’s all of Almodóvar’s cinema. He’s often overrated and put in a class of filmmakers—namely, Rainer Werner Fassbinder and Aki Kaurismäki—that are so much more sophisticated. Almodóvar has never made a real political film with teeth (Bad Education, released in the midst of the Catholic Church’s pedophilia scandal in 2004, is the only one that comes close), and his films have always been fluff. Anyone looking for a revelatory, groundbreaking masterpiece will be disappointed, but Pain and Glory is a first for Almodóvar: ambiguous, meandering, and tonally unique.