Make Way for Dolemite is My Name

It's an unabashed celebration of crudeness, vulgarity, and political incorrectness. A- 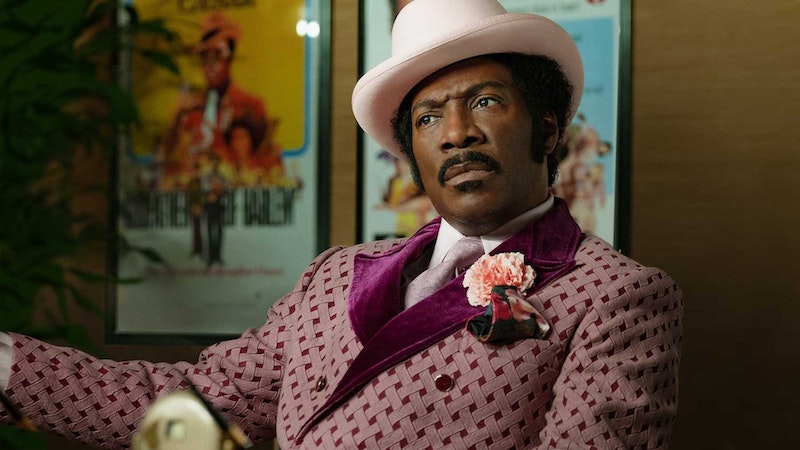 In Dolemite is My Name, Eddie Murphy does something I haven't seen since Burt Reynolds in Boogie Nights, more than 20 years ago: He delivers an authoritative star performance by an actor who hadn't shown much in a generation.

That's how good Murphy is here—he has the energy and life that hasn't been seen in his big-screen roles since Dreamgirls in 2006, which was itself a comeback after a long fallow period. We've missed this Eddie, and it's great to have him back.

This 1970s-set biopic of Rudy Ray Moore and the creation of his blaxploitation character, Dolemite, was directed by Hustle & Flow's Craig Brewer, and is a long-term project of Murphy's. It's an unabashed celebration of crudeness, vulgarity, and what in today's terms would be described as "political incorrectness." I loved every minute of it.

Dolemite was a boasting pimp character, performed by middle-aged journeyman entertainer Moore beginning in the early-to-mid 1970s. Dolemite is My Name shows how Moore essentially lifted the act from a group of homeless men (led by This is Us actor Ron Cephas Jones), and performed it first on stage, then on comedy albums, and eventually in a series of popular blaxploitation movies.

The first half introduces Moore and how he came up with the character, while the second half depicts the making of the first Dolemite movie, with a cast and crew of passionate, mismatched people making a movie despite not really knowing what they're doing. It recalls The Disaster Artist and Ed Wood, and that's not an accident. Dolemite is My Name was written by Scott Alexander and Larry Karaszewski, who also scripted Ed Wood, and were chosen by Murphy for the project for that reason.

The profanity and vulgarity are hilarious; Murphy says "motherfucker" with more authority than any actor this side of Samuel L. Jackson. But, as is often the case with R-rated comedies, the film's values are ultimately about the power of camaraderie and friendship, and ambitious creative people achieving their dreams. The production design is also rich with 1970s detail, and the costumes alone are worth the price of admission.

Dolemite is My Name, which played at the fall film festivals, is currently in a brief theatrical run and will hit Netflix on October 25. Murphy has described Moore as one of his heroes, and it represents a very promising first phase of a comeback in which Murphy is returning to stand-up comedy, hosting Saturday Night Live again, and making a sequel to Coming to America (also directed by Brewer.)

Murphy's not the only one making a comeback—Wesley Snipes also gives his first big screen performance of consequence in at least a decade as D'Urville Martin, the Dolemite movie's flamboyant director. The cast also includes Keegan-Michael Key as the Dolemite screenwriter, an August Wilson-like earnest playwright pulled into the very different world. The cast also includes Titus Burgess, Craig Robinson, Mike Epps and stage actress Da'Vine Joy Randolph, in a breakout role as the female star of Dolemite.

Ultimately, Dolemite Is My Name brings to mind one of the most tiresome tics of modern-day film discourse. That is for a commentator to point out a film from the distant past, praise it, and then declare that, due to political correctness or some other shibboleth, "that movie could never be made today (TMCNBMT)."

This is silly. Every movie is a product of the time and circumstances under which it was produced. Movies that couldn't be made today were still made in the past and, in most cases, are still viewable today, and many of the best movies made today couldn't have been made in the past. When people toss out TMCNBMT, what they usually mean is "that movie could be made today, but people I don't like might criticize it.”

But the biggest problem with such assertions is that they're usually wrong. The year 2019 has already seen many releases—Joker, Dragged Across Concrete, Jojo Rabbit—which would likely draw calls of TMCNBMT had they been produced in the past. Dolemite is My Name may be the greatest example of misplaced TMCNBMT of the year. It was made today, and I'm glad it was.