Every human being in Godzilla vs. Kong is dull as dishwater, but once the monsters actually fight, it's glorious. B 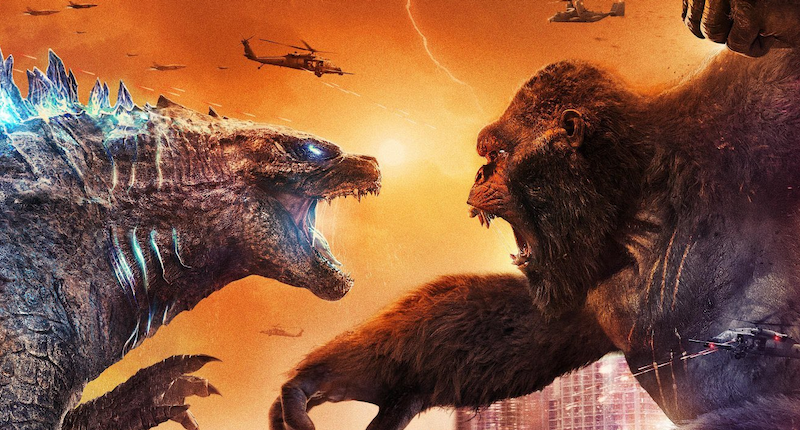 Two things are true of Godzilla vs. Kong, the clash of the titans coming to theaters (and HBO Max) on Wednesday. The plot is convoluted and nonsensical, hinging entirely on character minutia from earlier films in the series. Also, the huge fights between King Kong and Godzilla are awesome.

Godzilla vs. Kong, directed by horror veteran Adam Wingard, is the fourth in Warner's attempt at a Marvel-like extended movie universe, based primarily on Godzilla and King Kong. The best of the series was the first, 2014's Godzilla, which represented a much better-done Hollywood updating of the lizard's mythology than that unfortunate Matthew Broderick version from the late-1990s.

In 2017, there was Kong: Skull Island, a decent action picture which treated King Kong and his native island as an obvious Vietnam War allegory, and didn't get even let Kong get to New York. The other big difference was that Kong was really huge—instead of climbing up a building, he was the size of a building. Following another Godzilla sequel, 2019's Godzilla: King of the Monsters, the franchise has reconvened with both monsters present and ready to face off.

There are some human characters, including Rebecca Hall as a scientist observing Kong on Skull Island and Alexander Skarsgard as a nerdish professor, who wrote a book espousing the Hollow Earth theories pushed by John Goodman in the first Kong movie. Demián Bichir plays the head of a cybernetics corporation that, like all cybernetics corporations in movies, is up to no good, while Eiza González is his daughter/henchman.

Millie Bobby Brown, reprising her role from the last Godzilla movie, and Hunt For the Wilderpeople's Julian Dennison play a couple of teenagers seeking the truth, while Atlanta's Brian Tyree Henry is a conspiracy podcaster, the latest version of the popular movie trope of "Alex Jones, except he’s not wrong."

In Godzilla vs. King, I had a difficult time caring about anything that the humans were up to. It's all a long series of convoluted machinations to get Godzilla and/or King Kong to certain places at certain times. There's a nifty sequence set within Hollow Earth, although the explanation of getting there doesn't make sense. There are hints at romantic subplots that never go anywhere, while the only relationship I cared about was the one between Jia (Kaylee Hottle), the Hall character's deaf surrogate daughter, and Kong, with whom she alone is able to communicate.

But once Kong and Godzilla actually fight, it's glorious. They tangle multiple times, including once in the middle of the ocean, and again for multiple rounds in Hong Kong. It's all CGI, but the fights are presented with spatial coherence. If you thought the fights at the end of Man of Steel killed a lot of people and leveled a lot of buildings in Metropolis, that was nothing compared to what becomes of Hong Kong here.

Like most movies that involve a clash between the protagonists of separate franchises, Godzilla vs. Kong doesn't present either side as the clear victor, but has them hastily teaming up, against a third foe. A clash between Godzilla and King Kong isn’t a bad time to return to a theater. Just don't expect to care much about what the humans are doing.