Jane Campion's new film The Power of the Dog has the best performance of Benedict Cumberbatch's career. A 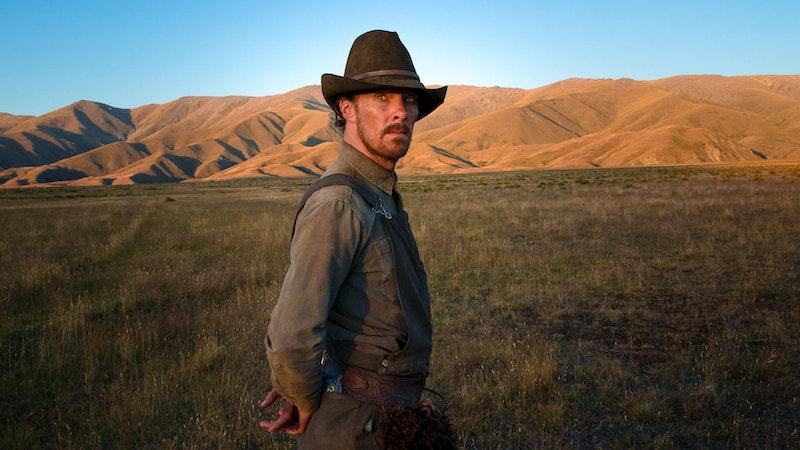 Benedict Cumberbatch gives the best performance of his career—and the best by any performer this year—in The Power of the Dog, the latest triumphant film from writer and director Jane Campion.

The film, Campion's first new feature in 12 years, was shot in the director's native New Zealand, which doubles for Montana. Adapted from the 1967 novel of the same name by Thomas Savage, The Power of the Dog is a tale of the American West, cowboy myths, brotherly jealously and masculinity. The Power of the Dog withholds the truth of what's really going on for a long time, and the answer is not only satisfying, but surprising.

Cumberbatch and Jesse Plemons play two brothers, Phil and George, who have a ranch together in 1920s Montana. George is a respectable businessman type, while Phil is more of a traditional cowboy, at most points appearing filthy. Phil speaks frequently of the example set by his late cowboy mentor figure, Bronco Henry.

When George suddenly marries a young widow (Kirsten Dunst), it causes tension between the brothers, especially when the new bride and her effeminate teenaged son Peter (Kodi Smit-McPhee) arrive on the ranch. Soon Phil is mercilessly bullying both mother and son, driving the mom to alcoholism. He's the kind of guy who's quick to ruin his sister-in-law's piano practice with a particularly menacing banjo solo.

Eventually, the relationship between Phil and Peter takes a turn, plunging his mother even further into alcoholic terror. The film's third act is shocking, but this is much less a film about plot as it is about character. The Power of the Dog is gorgeously photographed by cinematographer Ari Wegner, finding creative ways to photograph inside rooms in addition to out on the ranch. The film also has the year's best score, from Radiohead guitarist Jonny Greenwood, who also provided music for both Spencer and Licorice Pizza.

Phil Burbank is a wonderful creation, played mostly against type by Cumberbatch. It's very much a Daniel Day-Lewis-like performance from Cumberbatch, consisting of both quiet menace and loud histrionics. Dunst also delivers some of her best work, as does Smit-McPhee, who’s one of that group of young actors (also including Will Poulter and Barry Keoghan) who gives off a strange unsettling vibe no matter what the role. There’s also room for memorable supporting turns from the likes of Frances Conroy, Adam Beach, Thomasin McKenzie and Keith Carradine.

The Power of the Dog opened in theaters November 17 and heads to Netflix December 1, and seems as likely as any film to lead the awards banter this winter.