C'mon C'mon is the most indulgent and implausible of all of Mike Mills' films so far. 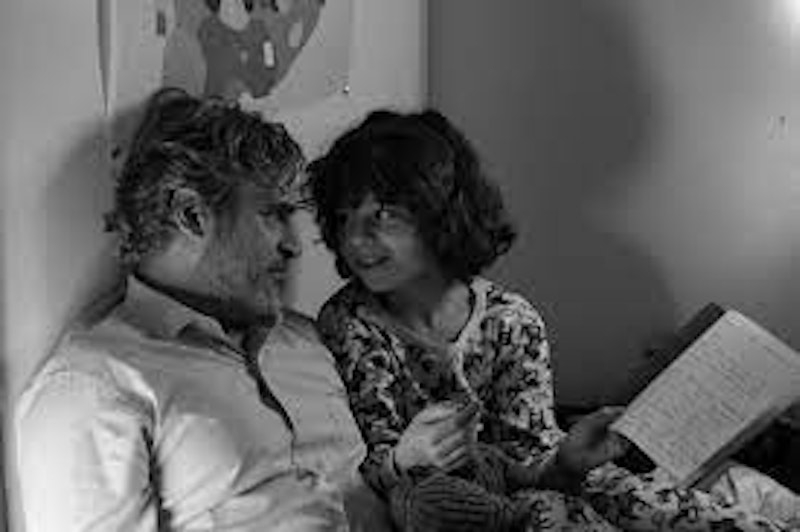 C'mon C'mon, the latest film from director Mike Mills, has gorgeous black-and-white cinematography by Robbie Ryan, providing a poignant eye on locations as different as New York, San Francisco, and New Orleans. It's just a shame that C'mon C'Mon isn’t a silent film. That's because almost everything said by the characters is either self-indulgent gasbaggery, or weightless profundity.

C'mon C'mon is high-concept, really: Joaquin Phoenix plays Johnny, a middle-aged single guy who works as a radio journalist. When introduced, he's working on a podcast or audio project that consists of interviewing children around the country, who share their thoughts on how they see the future. When Phoenix's California-based estranged sister (Gaby Hoffmann) has to spend a lengthy period of time tending to her mentally ill ex-husband (Scoot McNairy), Phoenix takes her irritating nine-year-old son (Woody Norman) on the road with him. This cramps his style, to some degree, although wouldn't you know it, uncle and nephew soon find a way to tolerate and eventually appreciate one another.

I understand what this film was going for, a sweet and sometimes heartbreaking family tale in the tradition of Kenneth Lonergan's You Can Count on Me, one in which a man-child in his 40s learns to grow up after a bout of surrogate pseudo-fatherhood. But despite the talented main actors, I had trouble caring about any of these people or their character arcs.

I have a nine-year-old son, and as a dad and sports coach, I’m around nine-year-olds a lot. I know that kids at that age can be a handful, especially if you're someone who isn't used to dealing with children on a regular basis. However, the kid in this movie is more irritating than any I've ever met, even if he didn't talk incessantly about death.

Even worse is Phoenix's radio documentary. Viewers are supposed to find these kids' ideas about an uncertain future to be profound and/or heartbreaking, but I noticed something: it's all nothingness. Who would fund such a project? Who’d listen to it? Even NPR devotees would likely object. Mills is a relatively respected director, best known for Beginners, the autobiographical film he made about his father (played in the movie by Christopher Plummer) coming out as gay at 75. A compelling story—and Plummer won an Oscar for it—but for some reason the movie was more the story of the son than the father. His next film, 20th Century Women, featured some good performances surrounded by weak storytelling devices. Still, I preferred both of those to C'mon C'mon.