They Do Go Boo

Wait Until Dark (1967) stars Audrey Hepburn in one of her only psychological thrillers. 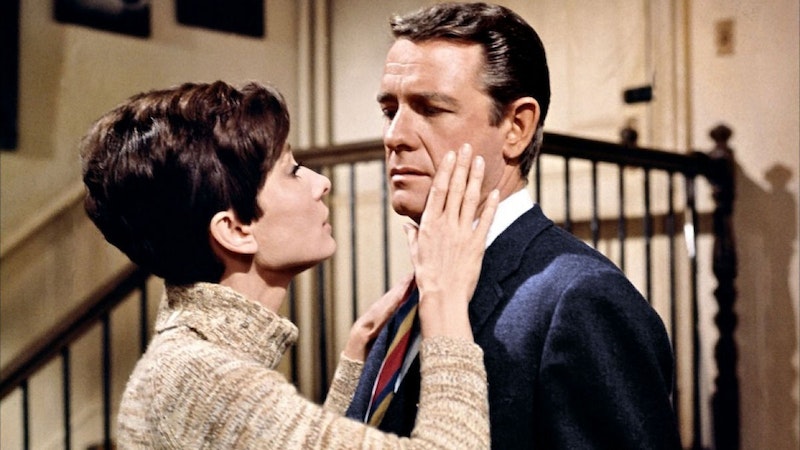 The idea of a psychological thriller isn’t something one thinks of in relation to Audrey Hepburn, yet Hepburn proved to be a fascinating and an unusual vessel for the genre. In Wait Until Dark (1967), Hepburn plays Susy Hendrix, a blind woman who’s terrorized by a band of criminals searching for drugs. The film, directed by Terrence Young, is based on a 1966 eponymous play by Frederick Knott (Broadway production included Lee Remick and Robert Duvall).

Susy’s husband, Sam, is travelling from Montreal to New York City when at the airport, he’s accosted by a woman with a doll. Fearing for her own life, she hands the doll to Sam, but unbeknownst to him, the doll contains smuggled drugs. He takes the doll home, thinking that the woman will pick it up. In the meantime, three con artists—Mike Talman (Richard Crenna), Carlino (Jack Weston), and Harry Roat (Alan Arkin)—create an elaborate con game in order to disorient Susy and get the doll.

Mike and Carlino appear to be working together, whereas Harry is a loner and unstable. They all pretend to be someone other than they are, and because Susy’s blind, she has to rely on the various implications of the sound in order to solve the puzzle. Her husband is gone on another photography assignment, and her vulnerability creates tension and anxiety.

As the film unravels, it becomes apparent that Susy is beginning to understand that all three men are the enemies. The doll is temporarily borrowed by a neighbor’s daughter, and while Susy’s out, the apartment is searched by one of the men. But this is one of the main actions in the film that begins a series of suspicions on Susy’s part. As a blind person, Susy depends on the exact placement of furniture and other objects around the house. When things get rearranged, she realizes there’s something terribly wrong.

She has no help from the outside world and Mike has made sure that her telephone line is cut. Not only is Susy caught in the game of three criminals who are fighting among themselves, she’s also trapped (literally and figuratively) in the clutches driven by the wretched doll. The denouement of the film builds up even more tension. Roat has eliminated both Mike and Carlino, and the final fight is between Roat and Susy. It seems impossible that a woman like that can defend herself against a maniacal criminal, but she creates an entire atmosphere of darkness in the apartment. For Susy, this is a natural way of being, but for Roat, it presents a problem and ultimately brings about his end.

This is a strange film. Produced by Mel Ferrer, Hepburn’s husband at the time, the film also marks the end of their marriage. Setting aside the personal aspects of the production, the film oscillates between a straight-forward thriller meant to induce anxiety to the audience, and a commentary on the “damsel in distress” trope. Naturally, it turns it around. The woman in question is continuously vulnerable, yet it’s precisely this vulnerability that becomes her strength.

Alan Arkin’s Roat is maniacal. He’s not just a simple con artist who needs to get his hands on his share of drugs and money. He’s mad, and at times, appears more like a serial killer than a disgruntled criminal. Often, his demeanor’s suggestive of Karlheinz Böhm’s performance as Mark Lewis in Michael Powell’s Peeping Tom (1960). Arkin’s unsettling and while Crenna brings in a possibility of goodness (murder is a line he doesn’t want to cross), Arkin’s depiction of Roat is that of a man possessed by pure evil. The audience gets an impression that the real release and pleasure for Roat is not acquiring the doll but murdering Susy.

The plot’s weak. Many questions arise, even something as simple as why Sam would take the doll in the first place. But to focus on that would be a critical mistake. Instead, the film’s meaning isn’t found in the plot or any of the protagonists. Rather, its focus is on the audience. The uniqueness comes through the atmosphere that brings on dread. At first, the dread is distant and isolated from Susy’s own experience. The audience appears to have an upper hand of knowledge. Their dread is the tension that arises from the fact that Susy isn’t aware of the truth and the three men’s actual intentions. But as the film unfolds, Susy’s journey converges with the audience.

However, at this crucial moment in which Susy must fully defend herself against Roat’s madness, the audience enters into a phenomenological sphere of the dread. Suddenly, the anxiety that was merely aesthetic and distant becomes visceral. The viewer’s seeing through Susy’s eyes, as it were, and their experience of fear converges with Roat’s. This is just one of the strange and unusual aspects of this film. In fact, during the production of the play, the lights in the theater were completely off. During the screening of the film, the lights were dimmed as much as possible until the end, the entire theater was in pitch blackness.

Wait Until Dark isn’t just the title of the film and the play. It functions on the several levels. For Susy, this has a note of hope—she needs to wait until dark in order to save her own life. For the audience as well as for Roat, this is a harbinger of pure fear—wait until dark! Only then will you truly feel the fear of the blind woman.