Curse on the High Seas

The film Acts of Piracy became a negativity magnet. 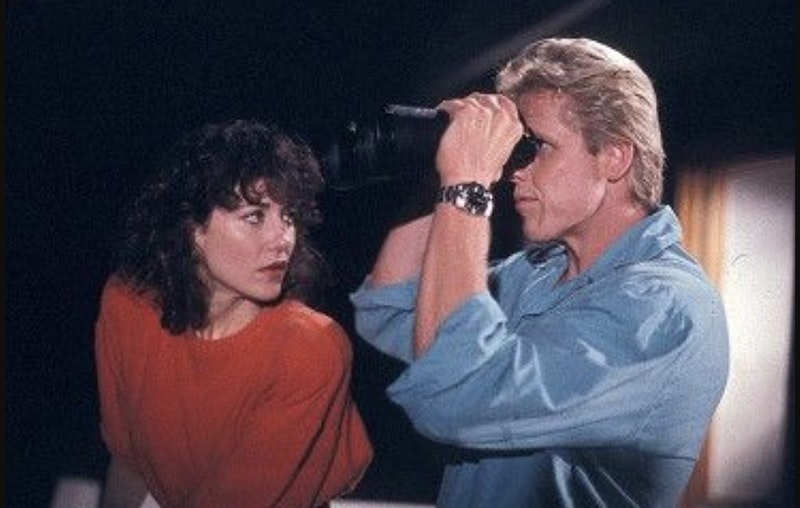 Billy Wilder once said, “There’s not much difference in making a good movie or a bad movie. You still have to wake at five a.m.” That’s how I felt in August of 1987 working on the film Act of Piracy on the Greek island of Skiathos.

For nine straight days, it rained. We’d shot all our interior scenes and were at a standstill until the weather improved. The crew was restless. People killed time in the hotel lobby reading or playing cards. Everyone complained. “Whose brilliant idea was it to come to a Greek island in winter,” the second Assistant Director asked. “How can we film a boat movie when we can’t even leave the docks?”

Jorgos, the hotel concierge, shut us all up. “It’s the Curse!” We’d heard about the Curse since we arrived. No one paid it much heed at first, but two months into production we were becoming believers. There had been too many freak events. During the first week of shooting, an electrician positioning lights on the hotel roof stepped into an abandoned elevator shaft and fell 90 feet to his death. The hotel fired the maintenance man who then drank himself into a stupor and fatally drove off a cliff.

Other accidents followed. A boat anchor fell on director Bud Cardos’ foot, breaking his toes. Cardos’ son crashed a motorcycle on an abandoned road and nearly bled to death. Gary Busey, the film’s star, was knocked unconscious when an out-of-control camera crane struck him on the head. A Greek grip was electrocuted when a cable shorted on a leaking motorboat nearly killing him. Added to this was a bladder infection afflicting half the crew.

“What is this curse,” I asked Jorgos.

John Belyeu, the special effects coordinator, shook his head and laughed. “You can’t deal with these Greeks, man. They’re still paying rent to their crazy gods.” Belyeu was the latest bladder case and hadn’t urinated in days. He also had a painful case of piles forcing him to walk hunched forward as if in a wind tunnel.

“This is my last damn location picture. When I get back to Los Angeles I’m getting a studio gig. This shit ain’t worth it.”

Co-Star Ray Sharkey was holed up in his hotel room battling a bad cold. I brought him a case of Nyquil, but he couldn’t shake the illness. “I think I got sick when I was jogging near the harbor,” he told me. “I was hit by a breeze and then my whole body started shivering.” (Two years later, Sharkey was diagnosed HIV positive. He died of complications from AIDS in 1993.)

Making movies is always difficult. The 14-hour days, six-day weeks and constant combat fatigue are standard fodder. But the problems we encountered seemed magnified. The film became a negativity magnet.

Act of Piracy was an action-adventure on the high seas. The story was straightforward. The hero played by Busey takes his wife and two kids on a boat trip to the Mediterranean. The villain Sharkey raids the boat with his gang and takes Busey’s family hostage. Busey spends the rest of the film trying to rescue his family and kill Sharkey.

My job was Third Assistant Director. I did everything no one else wanted to. I brought coffee to the actors, distributed call sheets, coordinated extras and stood around with dry towels for the wet crew. I learned to pilot a motorboat where I became a liaison between the hotel production office and the ocean-bound set.

The crew numbered 85 people representing seven countries—America, Greece, South Africa, Italy, Britain, Spain and Australia. Nearly a third of the crew were Greek. This posed a serious communication problem. I soon realized that the Greek language sounded like you were reciting the names of 20th-century gangster legends in quick cadence. “Al Capone” translated to “quiet on the set.” “Owney Madden,” meant “next setup.” “Dutch Schultz-Machine Gun Kelly” was interpreted as, “That’s a cut. Time for lunch.” I had lengthy conversations over the walkie-talkie with Stavros, the generator operator. One day I told him, “Stavros, John Dillinger,” which I thought meant “Would you like some coffee?” He thought I’d said, “Stavros, I’m going to crucify you.” That was the last of my off-the-cuff Greek.

Most of the Greek men I encountered had one of four names: Jorgos, Stavros, Nikos or Kristos. One morning I answered the hotel commissary phone during breakfast. The caller was looking for Jorgos. I yelled out, “Is Jorgos here?” Ten heads turned my way.

In the summer, Skiathos was a popular island resort. Since we were filming in winter, the only locals we encountered were fisherman and priests. Strangely, there were no women. This meant we had a crew of randy, testosterone-spewing hound dogs with no outlet. On our day off, I asked Jorgos the concierge if there were any women on the island.

“There are plenty of women,” he said.

That afternoon I drove with Jorgos in his battered Jeep beyond the tavernas and olive groves. He turned onto a thin dirt road and weaved the vehicle up a steep hill. He stopped in the middle of a large, dry field. The Aegean was visible on the horizon.

I saw nothing but dirt and distant trees.

We walked across a barren pasture. I assumed he was taciturn to protect the location of the hidden females. Halfway across the field, I smelled the acrid stench of livestock. We neared a forest of Aleppo pine. A thin wave of light spilled through a forest clearing. Jorgos stopped and spread his arms wide.

Cordoned off in a 50' x 50' area surrounded by barbed wire was a well-lit enclosure with several dozen sheep. An elderly man in a wool suit stood at the paddock entrance. Behind him, a Greek man with pants down to his ankles, crouched behind a sheep pumping away. The sheep bucked and bleated but the man’s grip was tight. The sheep suddenly lurched forward out of the man’s grasp. The man fell face first into the dirt.

Jorgos laughed. I was horrified.

“You make mistake. Is beautiful.”

Jorgos paid the sheep pimp and entered the paddock. I watched as he carefully studied the flock. He seemed attracted to a smaller sheep in the corner. He slowly unbuckled his belt. I walked away at this point, not wanting bestial voyeurism on my conscience.

Back at the hotel, production problems continued. The most recent batch of dailies were overexposed. The director of photography blamed the film lab while the lab technicians blamed the camera department. If the negative couldn’t be salvaged, this meant a week’s worth of filming was ruined.

Adding to the difficulties, the hotel staff (except Jorgos) went on strike. This meant no maids to clean rooms, no clerks to wash laundry and no chefs. The actors had a stipulation in their contracts promising five-star accommodations so they were threatening to fly back to the States.

A few crew members, including myself, went into the hotel kitchen and cooked large batches of pasta. The result was a disgusting, pasty gruel that we tried to improve with sauteed garlic and canned tomato sauce. The industrious crew members ordered food care packages from Athens so they could cook their own meals. This further alienated people since some dined on fresh meat and vegetables while others were stuck with canned tuna and bread. All the restaurants and markets in town were closed for winter. The crew resorted to heavy drinking.

Greek alcohol was horrendous. The Ouzo tasted like mouthwash, Metaxa smelled like turpentine and the Retsina wine was like pine sap. Drinking became an act of self-flagellation as if the crew were taking revenge on the island by destroying themselves. We all became obnoxious drunks, yelling and smashing plates. Someone broke into the prop room and fired rocket flares into the ocean.

“It’s the Curse,” Jorgos reminded us. “You no should stay here. Is no good.”

“Shut up,” John Belyeu screamed. “Shut your mouth before I stuff it with grape leaves.”

Belyeu finally crumbled. We all saw it coming. As Special Effects Coordinator, his job was to detonate and sink the main character’s boat, the dramatic climax to the film. The explosion was beautiful, with wood planks shooting hundreds of feet into the air. Unfortunately the camera wasn’t rolling. Belyeu’s Greek assistant thought the rehearsal “action” was the actual “action.” The mockup boat that had taken six weeks to build was destroyed. This left the movie without a final scene.

“I can’t wait to get out of this shithole,” Belyeu moaned. “They don’t even have beer. What kind of fucked up place doesn’t have beer? That’s what I get for coming to a place where everyone looks like Ernest Borgnine.”

As the rain continued, the crew grew despondent. We were in a state of cinematic paralysis until the weather improved. Rumors spread that production would be shut down. The producers gathered everyone for an emergency meeting. They informed us of the new plans. Several exterior scenes were cut from the script. Extensive dialogue scenes were changed from exterior to interior. All that was needed was five days of decent weather to complete the film. Any rumors of lack of funds or production cancellation were false.

The next day, the rain stopped. The crew resumed work with a new “The show must go on” attitude. Everyone was lighter, happy to be busy. We glimpsed the sun for a few minutes, though the clouds soon returned.

In his zeal to prepare a congratulatory dinner, Jorgos acquired a batch of Thessaloniki oysters. The entire crew was leveled with a bout of food poisoning. Conditions became so grave that shooting was cancelled for two days. This is when the sun reappeared. John Belyeu damned the entire nation of Greece. No one mentioned a word about a curse.