We'll Only Watch Your Anti-Racist Film if it's Racist 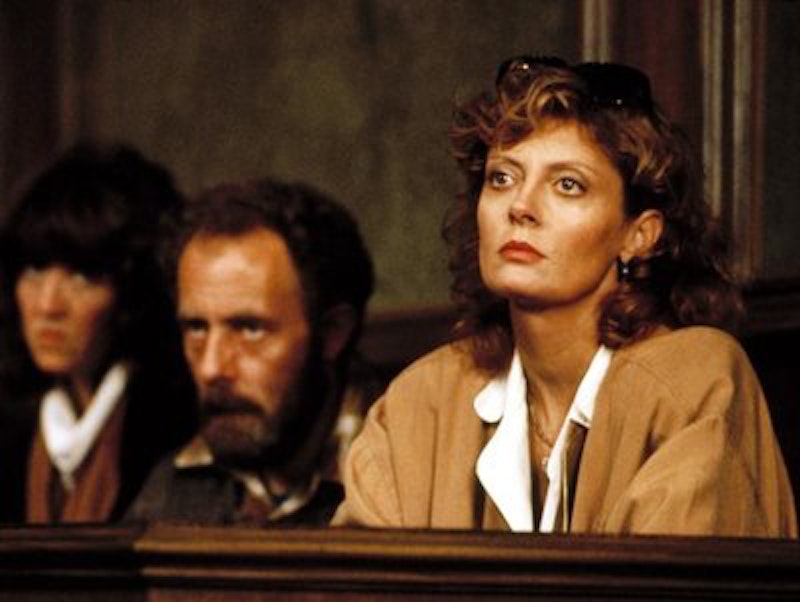 This is the ninth post in a series on women filmmakers. The eight, about Clueless, is here.

Euzhan Palcy's 1989 drama A Dry White Season is a painful film. In part because of its subject matter; racial injustice in 1970s South Africa is not a cheery topic. But it’s the framing of the film, which, in a necessary but still disheartening bid for mainstream impact, focuses its attention and emotional energy on white people, white goodness, and white redemption.

The film is set in 1976 in South Africa, during the Soweto protests, in which schoolchildren demanded better education, and were then shot and beaten by South African security forces. The main character Ben du Toit (Donald Sutherland) is a former rugby star and secondary school history teacher who’s largely oblivious to the racist terrorism on which apartheid and South African society is built. He’s rudely awakened, however, when his gardener's young son, Jonathan (Bekhithemba Mpofu) is beaten and killed by police. The gardener, Gordon Ngubene (Winston Ntshona), asks for help, and is then himself murdered. Ben decides to seek justice at all costs, and aided by other whites of conscience played by A-list actors, as well as by some grateful black people, he gathers evidence and transmits it to the newspapers before being heroically martyred.

Director Palcy, a black woman from Martinique, was by all accounts passionately committed to the cause of dismantling apartheid, as system still in place when the film was released. She took risks in traveling to South Africa to research the film, and got major stars to participate, including Sutherland, Susan Sarandon, and in a striking coup, Marlon Brando, who came out of retirement to turn in a schtick-heavy performance as a noble lawyer speaking truth to the corrupt government.

Roger Ebert praised A Dry White Season for showing more of the experience of black people than had been common in South African message films up to that time. It's true that the scenes of protest in Soweto, with children singing as the security forces stare them down, are vividly presented—a scene in which a girl begs the police to shoot her after they've killed her sister is almost unbearable. A man named Stanley (Zakes Mokae) functions as a sort of bitter conscience, escorting Ben to Soweto and appearing to utter bitter accusations at Ben's Christmas party. Still, Ebert's comparison mostly serves to underline how utterly uninterested in black people earlier films were. Black South Africans are in A Dry White Season, but considering the story is supposed to be about their plight, they hardly get much screen time.

Instead, the vast majority of the film's thematic interest, is devoted to Ben, the white liberal experiencing a moral awakening. Ben’s a good guy; he gives Gordon money for Jonathan's education, and is even-tempered and humane. At first he tells Gordon that there’s "nothing to be done" for his son, but as he recognizes the cruelty of the society in which he lives, he dares more and more. He alienates his wife, loses his job, and risks his own life as the white community closes ranks to declare him a traitor. He is, in short, a model for the audience, which, it’s hoped, likes him will see the pain and brutality on screen, and be radicalized.

The audience is, insistently, figured as white—and mostly male. In other films so far in this series on women directors, female directors presented stories that centered on female protagonists, and/or on a female gaze. Belle, Bend It Like Beckham, Clueless, Bound, and other works aren't necessarily radical in form or intent. But their worlds aren't default-centered on white guys either.

A Dry White Season presents no such alternate vision or alternate protagonists. Emily Ngubene (Thoko Nitshinga) should be the star of the film. She's the one who loses her son and husband, and she's the one who, with little except her courage and her fierce belief in justice, manages to move the white people in the film to make her husband's death their cause. But Emily is hardly onscreen; we know almost nothing about her. Even her death at the hands of security forces while defending her children is told only in glimpses in flashback. Brando gets the important lines; it's the white guy who understands how South Africa really works. "Justice and law, Mr. Du Toit, are often just... well they're, I suppose they can be described as distant cousins. And here in South Africa, well, they're simply not on speaking terms at all." White people are profound. Emily, on the other hand, says little, and then she dies, mostly to spur Ben on to further sacrifice, and to his own much more fully-visualized and consequential end.

Palcy knew her options, and made her choices. Films by women directors, and especially by women directors of color, are difficult to fund, and often disappear quickly once released; the work of Rea Tajiri and Ngozi Onwurah, for example, are extremely difficult to track down. Palcy wanted to bring attention to the racism of South Africa, and so she had to acquiesce, and utilize, the racism of the United States and the film industry. She had to convince major white actors to appear in the film, which meant giving them large roles. She had to flatter white audiences and give them white saviors to identify with and embrace. She had to frame a black woman's story as the emotional and spiritual journey of a white man.

Palcy's film insists that injustice must be fought, truth is worth dying for, and that all human beings must be treated with dignity and compassion. It rejects the logic of "nothing to be done." But to deliver those messages, the movie's director had to kowtow to the prejudices and the limitations of an audience that could only hear a message couched in racist tropes and racist terms. South Africa has become less racist since 1989, and perhaps the United States has too, though the recent presidential election is not especially hopeful on that front. Tactical compromises are often necessary for progress, and you can't condemn Palcy for doing what she needed to do to get her message across. But watching A Dry White Season now, its rhetoric of courage seems like a thin veneer over a deep institutional cowardice.